Two weeks ago Building looked at London’s post-Olympic construction projects and now it’s the turn of the rest of the country. Here we highlight some of the major regional projects coming up over the next few years and the construction trends they herald

Clearly most of the Olympic construction activity was focused in London so invariably its passing is less of a milestone outside the capital than within it. Nevertheless, there will be several key projects emerging over the next few years which will be symptomatic of wider trends across the non-London UK construction market.

The infrastructure and transport sector will perhaps be unique in undergoing sustained expansion over the next few years in a politically driven bid to stimulate economic activity. While the government’s pursuit of HS2 is symptomatic of this trend and the railways in particular look set to enjoy ongoing investment, other areas such as bridge building and urban metro systems will also see growth. Mathew Riley, head of infrastructure, industries and utilities at EC Harris, also predicts that “from around 2015 to 2020, regulatory settlements around capital investment plans for several publicly owned industries and utilities will spark considerable procurement activity.”

However, there is no ignoring the fact that away from the infrastructure sector, the rest of the UK inhabits a very different economic landscape from that prevalent in London. Buoyed by foreign investment and ongoing high demand, the London property market has remained resilient against the worst ravages of the downturn. This has not been the case outside of London, nor is it likely to be so for the next few years.

“The profile of development in the rest of the country is completely different to that in London,” explains Mark Farmer, head of residential and regeneration at EC Harris. “In London major mixed-use schemes are driven by the strength of the residential market. But outside London the residential market hasn’t bounced back which means that the viability of these major redevelopment schemes across much of the rest of the country is either marginal or negative and is likely to remain so for the medium to long-term future.”

As a result, Farmer surmises that the government and the Homes and Communities Agency (HCA) will have to play a far bigger role in promoting development by the deployment of statutory mechanisms such as subsidised land or deferred land payments.

One pronounced feature of the recession outside London has been the suspension of several high-rise city-centre projects across the country. Up until 2008, several landmark tall buildings had been planned for cities like Birmingham, Leeds and Manchester which have since been mothballed. Farmer reckons the resurrection of these projects isn’t going to happen in the foreseeable future. “There are still chronic supply and demand issues with several high-rise projects in cities like Leeds, Sheffield and Liverpool. There was a huge-oversupply of city-centre residential development in many regional cities in the last decade and much of that unsold stock is only just beginning to work its way through the system. Also, tall buildings must be built in one go and can’t be phased and once again the weakness of the residential market outside London makes it challenging to attract funding which imposes risk.”

Nevertheless, there is cause for hope and several major regional projects are still set to proceed through the downturn. Below is a selection of some which are indicative of wider trends we are likely to see over the next few years. 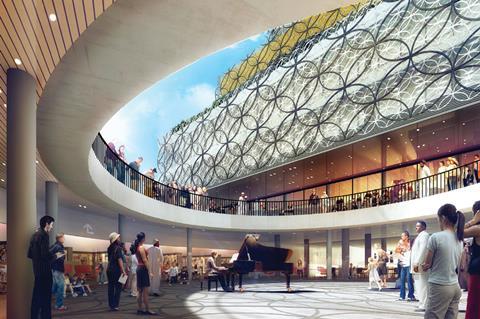 The £188.8m Birmingham Library is designed by Danish practice Mecanoo and built by Carillion, and is scheduled to open in 2013

Big City Plan is essentially a hyper-ambitious, 20-year urban renewal programme worth about £10bn and explicitly designed to cement Birmingham’s status as the UK’s second city.
Like many British cities, Birmingham suffered gravely at the hands of post-war development and while some of the damage has been reversed over the past decade, much of the city still lacks a strongly defined urban character or skyline. Moreover, for some the regeneration it has enjoyed of late, while significant, has not quite matched the relentless physical and cultural resurgence of smaller arch rival Manchester. Birmingham council’s ambitious solution is to transform 800ha of the city centre by creating 1.5 million m2 of floorspace, 65,000m2 of public spaces, 28km of enhanced walking and cycling routes, 5,000 homes, 50,000 jobs, enhancing 24-hour activities and generating an additional £2.1bn to the local economy each year.
The project has been split into two phases, the second was launched in 2010 and over the next few years will include the rebuilding of Birmingham New Street Station, the completion of the new Birmingham Library (Europe’s largest), the creation of a city park, the expansion of the city’s Midland Metro system as well as several other commercial and public realm projects.

While the Big City Plan masterplan is not a statutory document, it does identify a civic vision for renewal that crucially establishes a clear framework for city-wide development. It therefore represents a radical and heroic attempt to prescriptively orchestrate urban planning on a massive scale and is a direct result of Birmingham’s municipal administration falling under a single local authority (England’s largest) capable of forging the co-ordination and consensus that neither London’s semi-potent GLA nor its 33 fractious boroughs are capable of delivering. 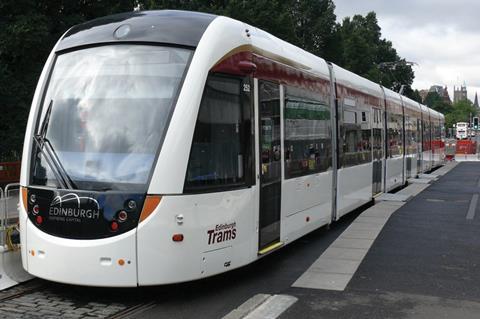 The 8-mile, 23 station Edinburgh Tramway project has been one of Scotland’s most controversial infrastructure projects. When initially proposed in 2003, the £375m project was due to begin service in 2011. However, construction only began in 2008 and by 2010 not only had just 28% of the network been completed but £440m had been spent on the project. The completion date has since been revised to summer 2014 and latest estimates put the budget in excess of £1bn. The litany of diversions, delays, revisions, contractual disputes, funding crises and cost overruns even superseded those of the infamous Cambridge Busway, which opened two years late and at almost twice its original £100m budget last year.

Unsurprisingly the Edinburgh equivalent has proved contentious within the city and the closure of Princes Street in particular, one of the city’s principal thoroughfares, has sparked fury and condemnation from city residents, cyclists and business people. Edinburgh council maintains, however, that once the network opens it will revolutionise the city’s transport network and economy by transporting 6,000 passengers an hour, indirectly providing 600 jobs, reducing reliance on the car and helping satisfy increased demand generated from Edinburgh’s projected 20% population increase by 2032.

With work ploughing on through the recession, the project is also indicative of the relative strength of the infrastructure sector through the downturn. Extended metro links are also planned in Manchester, Birmingham and on the Sheffield Supertram. 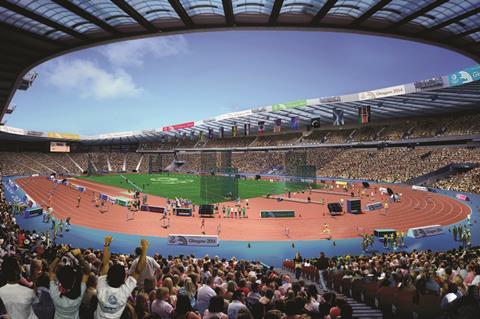 The UK’s next big sporting event will be the Glasgow 2014 Commonwealth Games. With a budget of £526m just over that of the Olympic stadium (£489m), the games are clearly never going to have the seismic impact on the UK construction sector unleashed by London 2012. Nevertheless several key projects across Glasgow will dramatically change the city’s urban and sporting infrastructure and will also accelerate the pace of regeneration already under way in certain districts. The games will be located in three clusters and will make extensive use of existing venues such as the Ibrox, Hampden Park and Celtic Park stadiums, the Tollcross International Swimming Centre and the recently refurbished Royal Commonwealth Pool in Edinburgh. New venues will include the Commonwealth Arena, Sir Chris Hoy Velodrome, the Glasgow Green Hockey Centre and the £229m Athletes Village. The latter will be built on a 35ha site in the city’s East End and will include 700 homes built for the games with a further 700 constructed afterwards, 300 of which will be allocated for social housing. New motorway links have also been installed in the city and a pedestrian bridge is to be built across the Clyde. Clyde Fastlink, a high-frequency bus network, will also serve the games once complete. 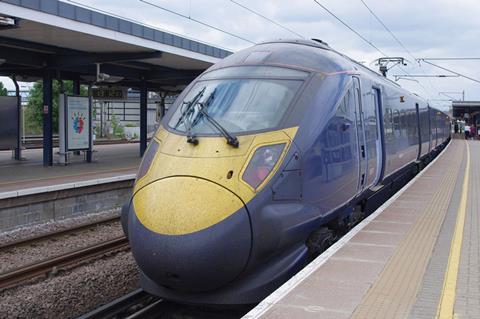 HS2 is indicative of the government’s reliance on big transport and infrastructure projects to stimulate the inward investment required to help plough the economy out of the recession. The unequivocal government support and ring-fenced public funding HS2 has enjoyed is in marked contrast to interminable political prevarication over aviation expansion and the austerity cuts being imposed in other sectors such as healthcare and defence.

Although not scheduled to open until 2026, should HS2 proceed, it will mark a revolutionary realignment of both national transport policy and capacity. The 119-mile railway between London and Birmingham (a future phase to Manchester and Leeds is scheduled to open in 2033) is expected to create up to 10,000 construction jobs, boost the West Midlands economy by £2.5bn and indelibly integrate high-speed rail into the country’s transport network and urban fabric.

However, the scheme faces stiff opposition, not least from an unlikely coalition of west Londoners and Cotswolds landowners mortified by the immense physical disruption HS2 is set to impose. At a cost of £32bn to shave just half an hour off the current 85-minute journey time between London and Birmingham and with the threat of prohibitively high ticket prices rendering the service the exclusive preserve of wealthy businessmen, several have also questioned the project’s fundamental economic and social viability. Despite the controversy, the government is committed to press ahead with the project and hopes to commence construction by mid-2018. 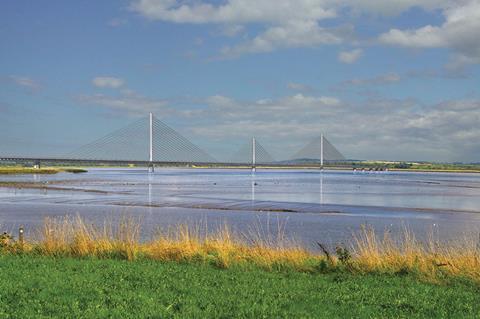 Mersey Gateway and Forth Replacement Crossing

These two massive bridge projects both involve the construction of a road bridge to relieve congestion on an existing bridge nearby. The £589m Mersey Gateway Bridge will be a six-lane toll bridge built approximately 1.5km to the east of the famous through arch 1961 Silver Jubilee Bridge between Runcorn and Widnes. Although the final design of the 1km bridge has not been confirmed, Martin Knight Architects’ draft design is based on cable-stay structure similar to the second Severn Crossing but with three rather than two towers. The span across the three 135m towers will be 600m across the deepest part of the river below.

Construction is expected to begin next March when the preferred bidder will be announced from a shortlist of three which includes Balfour Beatty and Bouygues, Merseylink and MGL consortium. The bridge was selected by KPMG as one of the world’s top 100 infrastructure projects and is expected to open in 2016. The £1.6bn Forth Replacement Crossing has been dubbed by Scottish finance secretary as Scotland’s “largest construction project in a generation”.

When it opens in 2016, the existing 1964 Forth Road Suspension Bridge will be retained for public transport, cyclists and pedestrians while the new bridge to its west will take all other vehicles. Like the Mersey Gateway, the new bridge will also be a six-lane triple tower cable-stay structure but with a much longer 2.7km span. Each tower will also be 207m high. Although preparatory construction began late last year, bridge deck assembly will not begin until late 2013. Around 4km of roads will be built at either end of the bridge to integrate it with the existing road and motorway network. The bridge has been designed by Arup and local engineers Jacobs and will be built by the Forth Crossing Bridge Constructors consortium.