Putting on the glitz: Brass cladding 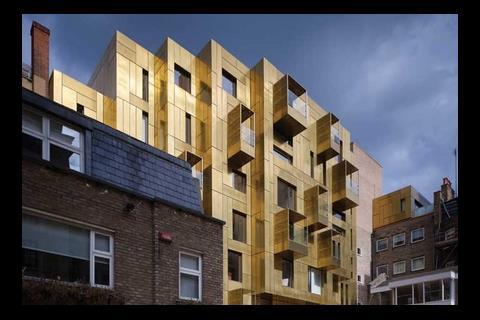 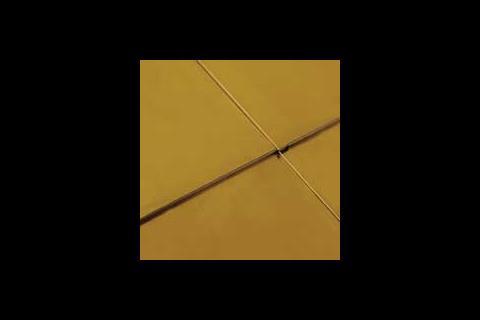 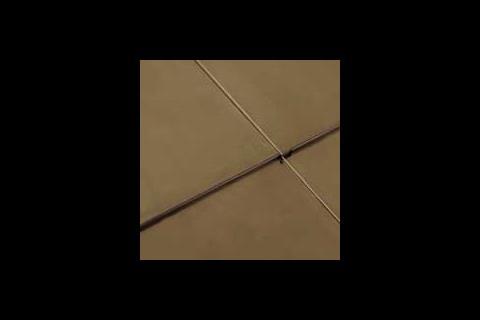 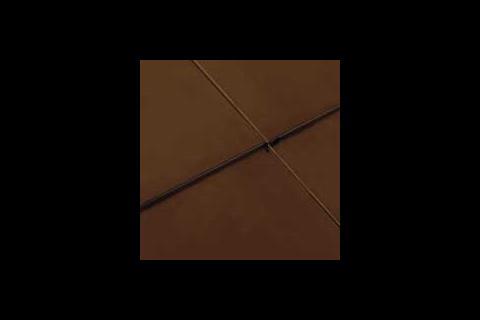 More and more architects, enamoured of the golden lustre of brass, are choosing it as a cladding material, while others love it just because of the way it weathers

From the street, Make Architects’ refurbishment of a sixties apartment in central London doesn’t look that remarkable. But from the terrace of the neighbouring RIBA headquarters you get the full effect. Cladding the building’s rear elevation is a striking, golden facade, which has earned it the nickname of the Cadbury’s Crunchie and is rumoured to reflect sunlight into the faces of people toiling at the offices opposite.

The building is one of a growing trend to adopt bright golden cladding. Think of Levitt Bernstein’s Colston Hall in Bristol or Rafael Viñoly’s visual arts centre in Colchester. But, unlike these projects the golden lustre of the scheme won’t last indefinitely. It’s clad in brass, which will mellow in time and for this reason is increasingly seen as an alternative to materials such as copper.

Roderick Tong, partner with Make says brass stood out. “Unlike aluminium which can look flat, brass is more vibrant and patinates naturally over time. Every panel is unique in as much as they will each patinate differently, providing depth and character.”

Brass, an alloy of copper, is robust, lightweight and highly corrosion resistant. It can be supplied in various formats, including rainscreen cladding, expanded mesh and more traditional shingles and seamed cladding.

John Champion, managing director of facade specialist James & Taylor, says there are two camps of architects when it comes to the aesthetics of using brass: those who are attracted by the element of “bling” it adds to the building in its freshly milled state, and those who specify it because of the way it weathers. Over time, the shiny yellow golden colour of the raw milled brass oxidises, and like other copper alloys, after the initial matting, takes on a greenish brown tone. Slowly, this turns greyish brown before evolving into a dark brown-anthracite colour, unlike copper which goes black (see pictures). This starts happening as soon as it is exposed to the elements and the full effect can be complete in just over a year.

KME, a supplier of semi-finished copper and copper alloy products, produces Tecu Brass specially for use on facades. Martin Quest, architectural projects product consultant, says it began offering brass and bronze for cladding following requests from architects who wanted to use copper, but wanted to hold back the development of the green patination. “We didn’t want to artificially stop this process. By introducing alloys of copper they respond differently, and are a natural deviation from the weathered surfaces.”

According to Quest, there has been a big uptake in the alloys since they were introduced four or five years ago. “In the UK it has been a lot quicker compared to Europe. Architects are more open-minded here when choosing materials. Also, we haven’t really had a long history of using copper in the UK since the war so we’re not so fixed on it.”

Being an alloy of copper, brass can be worked and formed in the same ways. For cladding applications it is normally supplied as a mix of 85% copper and 15% zinc. One way to alter its normal yellow hue is to vary this ratio. On this project, the designers used two grades, one with 15% zinc for the penthouses on the street elevation, and one with a higher percentage on the rear to create a lighter tone and provide a variation in the weathered surface.

But there are other tricks to altering the colour. James & Taylor recently supplied a version of its Eyetech mesh cladding system for the facade of the Queen Mary BioEnterprise Innovation Centre in London. Designed by architect NBBJ, this acts as a veil around the building, but rather than using the expanded aluminium on projects such as the Young Vic theatre, it opted for brass. But it was felt that standard brass would be too yellow and wouldn’t blend in with the red brick of the surrounding buildings, says NBBJ senior associate Ingo Braun. Instead KME, which supplied the brass, altered the temperature at which the brass was smelted to give a different hue. “It comes out slightly reddish rather than yellow, so it weathers to a more reddish brown colour, which it was felt would blend in more with the surroundings,” says Quest.

Using brass in this way was expensive and so had to be used in quite thin gauges. This meant the apertures in the mesh were about half the size of those used on the aluminium mesh of the Young Vic and it also needed careful supporting.

Brass is typically 5-10% more expensive than copper, but, says KME’s Quest, if someone already has the budget to use copper then this usually isn’t enough to dissuade them. Lead times are typically six to eight weeks, but the fluctuating prices for raw copper can be an issue. “Sometimes it can mean that when customers come to placing an order they can find the price has shot up and they can no longer afford it.”

Fancy something a bit brasher?

The golden lustre of freshly milled brass doesn’t last long. But, for designers who want to retain a bit of shine, there are other options. One is to lacquer the brass to prevent it oxidising. This has a downside – lacquers degrade when exposed to ultraviolet light and so need to be reapplied over time, which can be costly.

Another option is to use an alloy of copper and aluminium such as KME’s Tecu Gold or Luvata’s Nordic Royal. The latter, which is similar to the metal used in euro coins, has recently been used for the first time in the UK on a lakeside shelter designed by Studio Weave. The roof sides and underside of the shelter will retain their golden colour and simply lose some of their sheen as the oxide layer thickens with exposure to the elements.