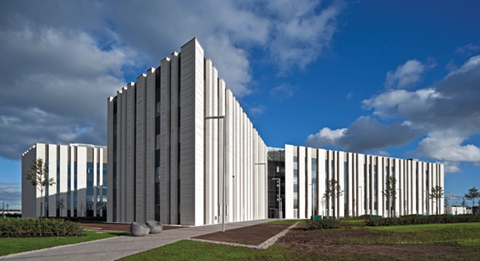 The police have rarely been thought of as purveyors of great architecture. For obvious reasons police stations tend to favour discretion and defensiveness over gloss and ostentation. Even Scotland Yard, arguably the most famous police building in the world, is, in its current incarnation at least, a dystopian mortuary-slab bunker that probably spreads as much terror as it valiantly seeks to repress.

But now, in Glasgow, the police are poised to set the design record straight. BMJ Architects and Ryder Architecture’s £82m Scottish Crime Campus is a groundbreaking venture for several reasons.

For a start, it will be the first time that a variety of police and judicial agencies are housed under the same roof within a purpose-built, state-of-the-art headquarters. The tenants include the newly amalgamated Police Scotland force and its forensic services, the Crown Office and Procurator Fiscal (loosely the equivalent of England and Wales’ Crown Prosecution Service), as well as Scottish outposts of HM Revenue & Customs and the recently relaunched National Crime Agency, our fledgling and distinctly more emaciated version of the FBI. There is certainly no equivalent of judicial collaboration on this scale in England and, as the design team tentatively suggest, quite possibly across Europe either.

By reinterpreting the concept of the dna barcode as an architectural language, we’re able to give identity to the building
Gordon Murray, Ryder

But the architecture has equally grand ambitions. Ryder has attempted to design a building that retains the defensive rigour of police architecture while humanising it with an inventive conceptual design approach. Moreover, the architecture also had to respond to the unique set of design conditions imposed by the multiple occupants, and address the varying requirements for collaboration and segregation.

But perhaps most intriguingly of all, at least from a political perspective, is the fact that the Scottish Crime Campus is being presented as one of the first built products of the Scottish government’s new architecture policy. That a government has an architecture policy in the first place will come as a surprise to many, but it is a particularly pertinent issue at a time when the shrinking of Cabe is still fresh in the memory and when Sir Terry Farrell has recently been appointed to test the waters for a similar approach at Westminster. What better building than a police headquarters to gauge the merits of how and if design itself should be policed? 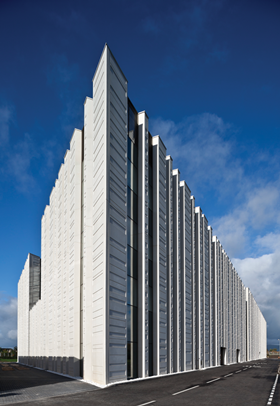 The facade is inspired by the DNA barcode

The Scottish Crime Campus is located on a former disused steelworks site in Gartcosh, eight miles east of Glasgow. The steelworks closed in 1986, leaving the site largely derelict in an open clearing some distance from the closest houses and offering fine views of the Lanarkshire hills. All of which combined to create a perfect location for the high-security environment a police HQ would require.

But while the location was ideal, there was not much for the architects to read from in terms of context in order to kick-start their design. This led to a uniquely appropriate architectural concept, as Ryder partner and University of Strathclyde professor Gordon Murray explains: “The building is inspired by the DNA double helix converted into a barcode [a common way of expressing the gene sequence]. DNA is at the heart of the forensic work carried out in the labs inside as it is the key to discovering someone’s identity. By reinterpreting this concept as an architectural language, we’re able to give identity to the plan, facade and the building as a whole.”

In line with this concept, the building is conceived as four wings arranged around a central atrium, a configuration that mirrors the legs of a chromosome that wrap around protein cells to form the double helix. This establishes a series of jagged, diagonal geometries throughout the building, the boldest of which, a single block splayed at an oblique angle to the other three, is aligned to the axis line between the campus and the adjacent train station.

But it is on the outside that the full force of the DNA analogy comes into view. Each facade is a towering four-storey wall laser-sliced at its summit to form a continuous roofline across the entire building. The facades are also sliced vertically and subdivided into either solid precast U-section concrete shafts or continuous curtain-wall bays, each one again extending across the full height of the building. Three different widths of concrete shaft are employed, the seemingly random dispersal of which creates the chromosome “barcode” effect.

The barcode motif is one that architects have plundered mercilessly over the last decade or so, with depressing results very often. But here it assumes integrity by being anchored to a credible design concept and expressed with a simplicity and force that provides a strong sense of identity in a contextually barren post-industrial environment.

Murray speaks of wanting the building to appear “rooted and secure”, aspirations that are entirely appropriate to the function and convincingly realised by the architecture. 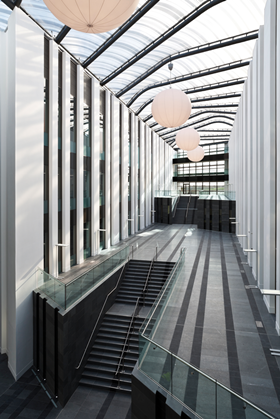 Deep reveals accentuate mass and solidity and cast thick shadows onto the luminous shafts of white concrete (as well as providing solar shade). And the concrete itself is as honed and smooth as Portland stone, its grooved horizontal indentations reminiscent of classical rustication, yet also contributing to the impression of the building as a stratified geological formation rising out of the landscape.

With its scale and uniformity, the effect is inevitably monolithic and severe, and the ensemble is weakened slightly by the flimsy capping detail just visible along the roofline. But overwhelmingly this is a powerfully and dramatically realised architecture that cleverly employs sculptural form and fluid elevational rhythm to reinterpret and enrich the “secure fortress” aesthetic traditionally associated with police architecture.

The facade design continues into the atrium, with the only principal difference being the shallower window reveals. The dynamic, interlocking plan of the atrium sucks the four blocks together and revels in the splayed, diagonal geometries established by the DNA concept. These are most dramatically expressed in the stack of overhead bridges that span one end of the space, providing both practical and symbolic links and also expressing the primacy of the entrance axis.

With the use of concrete, the material finish is again consistent with the outside. The two main differences here are the dark slate cladding applied to the walls and floor of the lowest storey and the undulating ETFE roof. While the curvature of the roof is a jarring departure on a building that has taken such pains to maintain orthogonal rigour, its linear solar frit once again evokes the barcode analogy and the slate base is reminiscent of the geological patterns on the exterior.

With the exception of the forensic labs and a suite of witness interview rooms on the ground floor, office accommodation is surprisingly conventional. In order to foster collaboration between the various agencies, the building’s first two storeys comprise mainly communal areas such as cafe space and meeting rooms that will be open to all employees. The impression of four segregated buildings is again diluted by the presence of one primary vertical circulation core rather than four placed in the individual blocks. Murray also points out that the diagonal layout of the blocks enables them to be extended relatively easily in the future.

Two final ingredients helped create the Scottish Crime Campus: policy and procurement. As one of largest capital works projects since the Scottish parliament building, the complex is inevitably a demonstration of the devolved government’s political priorities as well as a symbolic statement of intent regarding the administration’s wider approach as to how (they believe) political policy can shape both the construction market and the urban environment. 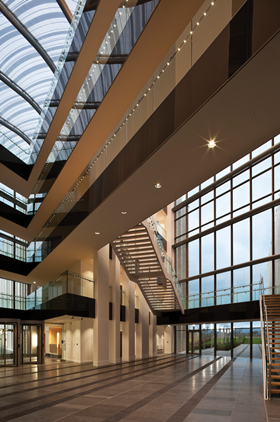 The atrium is spanned by bridges that link the four blocks. It also preserves views out to the surrounding landscape

The crime campus, which recently won a GO (Government Opportunities) Excellence in Public Procurement Award, was one of the first major projects procured through Public Contracts Scotland, the Scottish government’s new centralised procurement portal. Murray maintains that right from the pre-qualification questionnaire, the procurement route “was design-led”. Furthermore, in order to deliver such a complex project for multiple agencies, the procurement process, which adopted an innovative “four-contract” strategy that allowed various works to be undertaken by specialist contractors best suited to their execution, had to be as “well designed” as the building.

But for those not involved in delivering the project, perhaps the biggest interest will be that the campus is one of the first fruits of the Scottish government’s recently introduced architecture policy. This espouses similar mantras to those articulated by Cabe, such as creating better places and promoting good design. But it is remarkable for actually forming the basis of government policy as opposed to, as was the case with Cabe, merely providing expert but disposable consultant advice.

So, does the Scottish Crime Campus set a good example of how architectural policy can be delivered in practice? Unsurprisingly, the answer, according to the Scottish government’s principal architect Sandy Robinson, is an unequivocal yes. “Design costs are a fraction of overall project costs. Design is often far more about the quality of co-ordination rather than expensive finishes or materials. We’re not here to tell architects what or how to design, but to maintain a framework that ensures that people and places are at the heart of architecture.”

Nobody would argue with such altruistic ambitions but as ever the proof is in the pudding. The sculpted keep that is the Scottish Crime Campus sets a promising precedent for how architecture and politics can, for once, happily co-exist.

This article was originally published in print with the headline “A Positive ID”.