Shored up: The RNLI's lifeboat centre in Poole

Before the Royal National Lifeboat Institute could begin construction on its All-weather Lifeboat Centre in Poole Harbour, Dorset, it first had to find a way to manage the flood risk of its quayside location 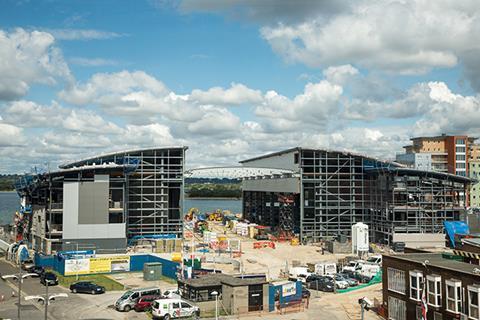 All charities provide an invaluable civic service but with the third longest coastline in western Europe and the 12th longest in the world, the United Kingdom and her inhabitants are especially indebted to one charity in particular. The Royal National Lifeboat Institute (RNLI) was founded in 1824 to save lives at sea. To date it has rescued more than 140,000 people, with the last three years counting as the busiest in the charity’s 190-year history.

This recent acceleration in workload has set the RNLI a number of land-based, as well as seaborne, challenges. The RNLI has a fleet of 346 operational lifeboats based in 246 lifeboat stations across the UK and Ireland. The most recent addition to the RNLI’s fleet is the Shannon-class lifeboat, the most technologically advanced lifeboat the RNLI has ever produced.

As the technological specifications of the Shannon and other similar vessels advance, the RNLI has found that they have an ever smaller pool of specialist suppliers and boat builders to manufacture and maintain their increasingly state-of-the-art fleet. And yet the charity has calculated that it needs to build at least six Shannon-class or equivalent lifeboats every year as well as maintain its remaining fleet.

So the RNLI has come up with a radical solution, to build a brand new £14.5m facility that for the first time will provide the charity with its very own world-class combined engineering, production and maintenance facilities. The new All-weather Lifeboat Centre (ALC) is now under construction at a quayside site at the RNLI’s headquarters in Poole, Dorset and is scheduled to be fully operational in 2019. 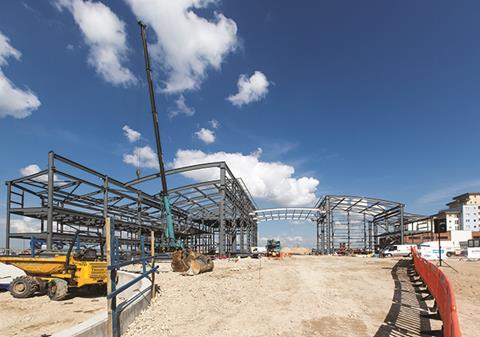 The three-span portal frame under construction

With its radical dual production and maintenance role, Len Salter, managing director of contractors Bouygues UK Construction Central South (of which contractor Leadbitter is part), which is building the facility, describes it as being “as efficient as a Toyota car manufacturing plant”. With combined facilities for building and spray-painting hulls; maintaining and repairing boats as well as two boat-lifting 5-tonne hoists; storage for diesel and petrol tanks plus the requirement that the ground level and quay wall be raised by approximately 1.5m for flood defence purposes, it is easy to anticipate the huge technical challenges such a highly specialised and bespoke project entails.

But the real novel aspect of this construction is hidden from view. A radical construction arrangement includes piles that do not incorporate pile caps and new foundations built above the original ground level.

Leadbitter, owned by French contractor Bouygues, won the contract to build ALC after a two-stage tender competition. Preliminary enabling works were initially carried out by Bam Construction and involved demolition of the former shipyard previously located on the site. This included the recycling of large concrete crane bases found on the site.

Leadbitter’s biggest challenge initially was one that has had an enormous impact on the construction of the facility in general and its unusual piling and foundation technique in particular. The site is located directly on Poole harbour and has been prone to serious flooding in the past. A local strategic flood risk assessment therefore stated that both the site ground level and its surrounding quay wall had to be raised before the facility was built. 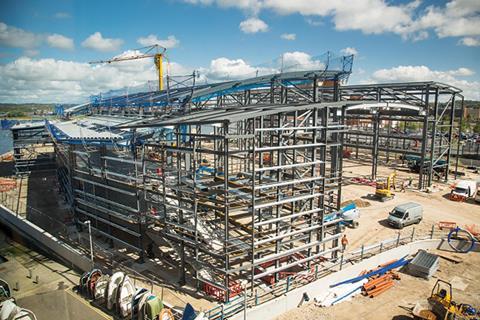 This required the quay wall to be raised by 1m and ground levels across the site to increase by 1.4m. With the quay wall this was achieved by rebuilding the wall using cap and beam construction on a new sheet piled wall. But arguably the more significant challenge involved raising the ground level across the entire site. The additional ground material required for this purpose comprised reused crushed aggregate from the former shipyard and 15,000m³ of sand imported onto the site. At one point this mountain of imported sand stood up to 4m high before being laid across the site.

But as the site was located by the sea, the sand couldn’t simply be spread across the ground. Proximity to the sea ensured that the soils underneath the site had been stratified by a spongy peat which potentially formed an unstable base for the new sand. In order to ensure that the new sand achieved sufficient settlement on the ground, the subsurface peat layer had to be dried.
This process, known as surcharging, essentially involved squeezing the water out of the ground via wicks inserted into through the sand and into the peat layer below. Once this process was completed, the piling could begin.

Over 2,000 Vibro Concrete Columns (VCCs) were laid across the site. Vibrating piles of this kind are particularly suited for sites such as this that contain weak alluvial soils and peats where traditional high-impact methods of piling may aggravate more fragile ground conditions. The only area where this method deviated was along the quay wall where pre-auger piles were used. VCCs, a ground improvement technique, transfer loads to the sands which are approximately 4m to 7m below the original ground level.

The piles were laid out in a 2m grid but a complex logistics plan was established that enabled the piles to be laid incrementally around the mounds of sand and crushed concrete intermittently dispersed across the site.

Also, extensive ground radar surveys were carried out to ensure that the piles avoided below-ground obstructions that might have been substructural remnants of the site’s former shipbuilding infrastructure.

Once the integrity of the surcharging process had been confirmed, the piles were then covered. But it is here where the construction process breaks even further from convention. Very unusually, no pile caps were installed above the piles. This was because the piles did not directly support the foundations in the conventional manner.

Instead they support further layers of imported sand and dredged material onto which the foundations are built. This is to spread the incredibly heavy boat-imposed loads the ground will eventually have to bear across as many piles as possible. Wheel point loads of up to 60 tonnes have been specified for the ALC which is comparable to the loading accommodated in airports.

These load-transferring foundations are configured differently depending on whether they are located underneath the new buildings or its central courtyard. Under the buildings, the VCCs are covered by a load transfer platform consisting of dredged material and site won crushed material with the reinforced concrete pad foundations cast above. The top of the ground-bearing floor slab is set approximately 1.5m above the original ground level and top of the VCCs. Under the central courtyard area, the VCCs are topped by two geotextile layers before the load transfer thickness is placed; this assists with the transfer of loads where there is no ground floor slab. 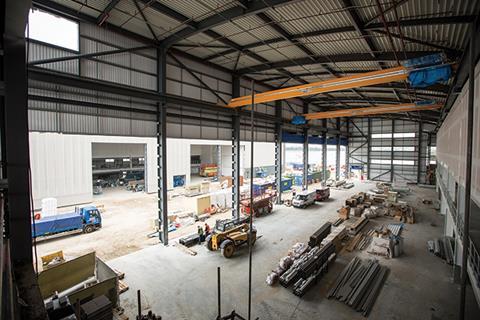 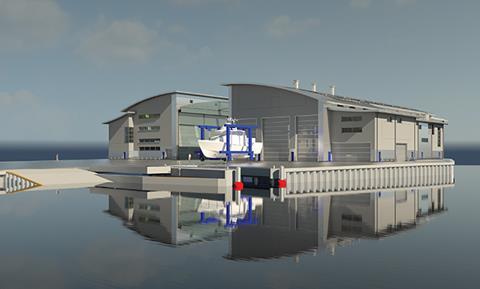 A visualisation of the completed scheme

Above ground the building proceeds in a more conventional manner. The ALC comprises a 3-span steel portal frame that houses two barrel-roof building volumes separated by a covered central courtyard. The buildings are clad in composite steel and aluminium, and covered by a Kalzip standing seam roof.

The extraordinary additional structural capability this requires has ensured that the building’s steel sections alone weigh 12,000 tonnes. They also incorporate proprietary ties and connections as the steel is too thick and dense to be directly drilled into.

Both halls also incorporate mezzanine levels to avoid deployment of the device traditionally used to access the upper components of larger boats, a ladder. Other facilities will include hull spray booths, boat refit areas, administrative offices, standby generators and an extensive underground infrastructure that ranges from data, power and water supply to fuel provision, all of which had to be accommodated within the facility’s complex foundations configuration. Mechanical services are also extensive and includes specialist plant such as dust extract from the spray booths.

Most of the constructional ingenuity of the new ALC, particularly its pioneering foundations, will be hidden from view when it completes. But the RNLI’s new facility already looks set to assume all the technical complexity and resourcefulness of the advanced fleet of lifeboats it is soon set to house.