Sketch of the week: Gehry buildings

This week’s #buildingdoodle sketch is by Bryan Avery, princpal of Avery Associates Architects 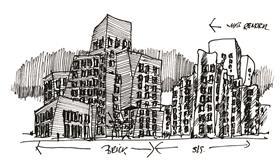 The sketch shows Dusseldorf’s Gehry buildings, which run alongside the Rhine river in the German city’s harbour district. Avery said: “This is an extraordinary composition. It has three genetically similar objects, two of which are large, brutish and ugly, but you don’t see them because between them there’s a pretty building, clearly related to the other two, but dancing happily in a shimmering dress that just captivates the eye.”

To submit your sketches for publication please email building@ubm.com or post via Twitter using the hashtag #buildingdoodle