Faced with the task of adding an extra 11 storeys to its structure, the engineering team working on London’s South Bank Tower have found a way to extend its height without additional foundations or a dramatic redesign 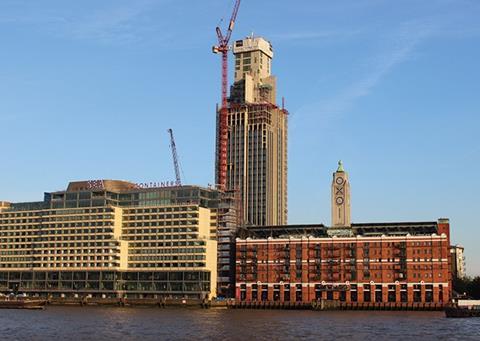 How do you add an extra 11 storeys onto a 30-storey tower block without substantially increasing existing structure or adding any additional foundations? This is the question that structural engineers AKTII have ingeniously answered at South Bank Tower in London’s Southwark.

The South Bank Tower was originally called King’s Reach Tower when it was initially completed in 1972. Designed by pre-eminent 1960s and 70s high-rise architect Richard Seifert, who also designed London’s Centre Point, it was built by what was then known as John Laing Construction.

The 111m-high office block was typical of the podium-and-slab design that characterised much of post-war high-rise building in the UK and elsewhere. The tower itself was a concrete frame with externally expressed precast concrete columns. This arrangement makes it similar to Seifert’s other, much more famous work, the former NatWest Tower across the river in the City of London, although with its flabby proportions the South Bank Tower was a much dumpier effort.

When plans to redevelop the tower were first presented by developer CIT in 2011, the proposals were to add an additional five storeys, increasing its height to around 129m with new retail units at its base and the addition of 173 new flats. 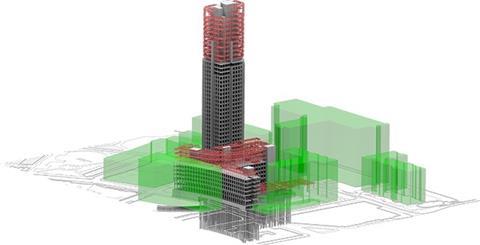 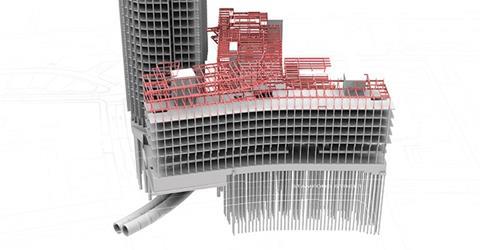 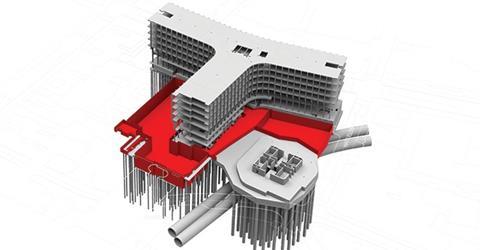 But by the middle of last year, new permission was granted to add a further six storeys and eight flats, taking the tower’s new full height to 155m and creating a 41-storey tower comprised of 11 additional storeys. In construction terms, how did this come about?

According to Albert Williamson-Taylor, co-founder of AKT II, the very first thing the engineers did before even proposing solutions was to understand the existing building and structure. Taylor strongly maintains that this is a critical analytical process pertinent to all strands of design, whether it be architecture or engineering.

“We were able to obtain a set of ‘as built’ drawings, including reinforcement information,” he says. “Following an extensive review and complex forensic analysis based on the information at hand, we undertook testing and model simulations to understand the building, its materials, the present condition of its components and how it performed structurally.

“Force directions through the structure were identified, which helped to inform our understanding of the resiliencies of each individual component. New load paths were also identified via this process, as redundancies and resilience within the various structural components were identified and then exploited.”

The existing structure included a central load-bearing concrete core and precast concrete columns along the tower’s perimeter. There were no internal columns and floors were comprised of waffle slab construction. The engineers noted that both existing floors and columns incorporated high levels of stiffness. 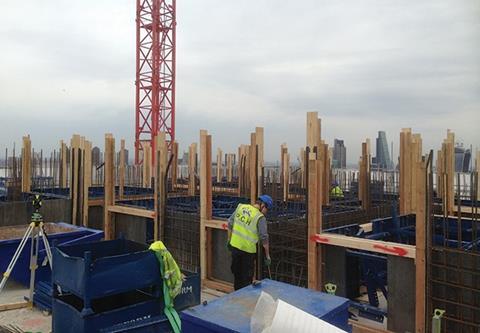 The engineering solution involved capitalising on this stiffness by building a new 11-storey reinforced concrete core on top of the existing core and transmitting all deadload from the new core and structure down through the existing one. To minimise loads, the new upper section of the building consists of steel structure acting compositely with lightweight concrete floors. Also, the additional deadload actually improves the stability of the new taller building by essentially pre-stressing the existing core.

But while deadload from the new structure is essentially dumped on the existing core, stability loading is handled by different, equally innovative means. Williamson-Taylor refers to “new load paths” being established. These are represented by a dramatic series of six new concrete slip-formed blade or wing walls that radiate out from the new upper core section and connect it to the existing perimeter concrete columns. The result is that these columns now handle stability loading for the new structure while the central core absorbs deadloading.

Williamson-Taylor reveals that this innovative dual-loading structural solution actually made the new core lighter than it otherwise would have been, again minimising new loading on the existing core below. Another significant structural alteration on the renovated building includes the addition of three new floors to the formerly six-storey podium. The tower is also being re-clad, although the defining projecting profile of the perimeter columns will remain.

Williamson-Taylor concludes by pointing out that no strengthening was required on the foundations, explaining that they were “reassessed to ensure there was sufficient capacity to accommodate these extra loads”. 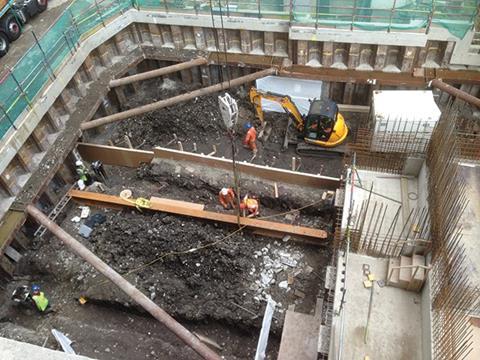 Substructure works on the new basement within the enlarged podium

The lack of additional foundations or the need for a thicker existing core might lead one to believe that that the original building was over-structured. This is an accusation that is not exactly alien to Seifert buildings. When the 183m, 47-storey NatWest Tower opened in 1980 it was the tallest cantilevered building in the world. But this came at a steep price. Its core is so thick that despite it being almost twice the height of the neighbouring 104m, 25-storey 99 Bishopsgate Tower, it offers 1,000m² less internal area.

But Williamson-Taylor categorically refutes the notion that the South Bank Tower was over-structured, stressing that it was “appropriately designed for the building and engineering codes of the time”. So to what then does he attribute the startling efficiency of the new structural solution and the lack of additional sub or superstructure on the original tower?

“No structural element should ever have only one single purpose, it’s about fully understanding the physicality of the existing building and developing an engineering solution that identifies and exploits structural resilience and redundancy within it.

“Also without the work of a team committed to a design-led approach that combined architectural vision and engineering expertise in equal measure, the re-modelling of an existing building of this kind would simply not have been possible.” 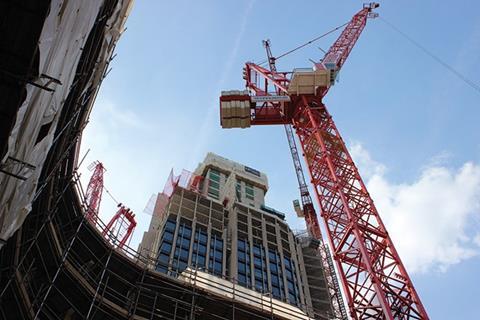 The tower viewed from the enlarged podium