Athens’ vast £500m Stavros Niarchos Foundation Cultural Centre is being crowned with a 10,000m2 ferrocement canopy, designed by Expedition Engineering. Why did the UK practice settled on this unusual choice of material? 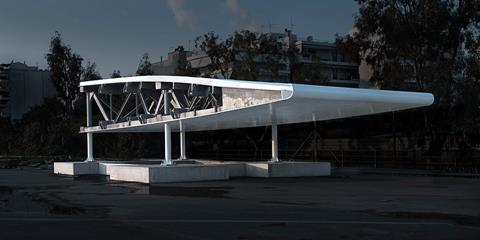 Roof canopies don’t come much larger than the one being built at the Stavros Niarchos Foundation Cultural Centre (SNFCC) in Athens. Measuring a stupendous 100m x 100m, the structure could very nearly accommodate the entire footprint of Buckingham Palace on its surface. This is just as well as the roof is part of what director Martin Hirko of employer’s representative Faithful + Gould calls one of the biggest single privately-funded cultural projects in Europe.

The sprawling complex includes the new National Library of Greece and a National Opera House complete with a 28,000m² auditorium. Both are situated within a brand new 42-acre public park containing around 1,000 trees and located about three miles south of the centre of Athens on a former car park for the 2004 Olympic Games. The development also aims to be the first public building in Greece to gain LEED certification.

As one might expect, a development of this scale has thrown up its fair share of engineering challenges. Not only does the complex sit within an earthquake zone but the design concept called for the majority of the building to be submerged under a 14m-high artificial hill. Construction began in 2011 and is expected to complete in 2015. 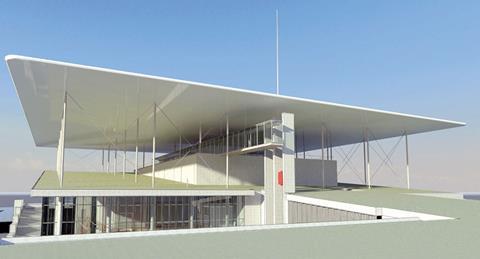 Luckily for the precipitous Greek economy, the mammoth £500m project is being funded entirely privately by the foundation established in memory of the billionaire Greek shipping tycoon from whom it takes its name. Renzo Piano has designed the scheme but UK involvement is present in the shape of Faithful + Gould, which has provided project management services; Arup, which is responsible for the rooftop photovoltaics, which will generate a peak energy output of 1.5MW; and Expedition Engineering, which has designed the building’s ambitious canopy structure.

It is this structure that is of particular interest - not just for its scale, but also in terms of innovation. Uniquely, the canopy has been constructed almost entirely from ferrocement, which has been used as both structure and finish. Ferrocement is a material more commonly associated with boats or water tanks, and even on the relatively few occasions when it has been applied to a building, it tends to be used as cladding rather than structure.

Therefore its use on a structure of this scale is virtually unprecedented. But, as Expedition associate director Tim Hurstwyn explains, ferrocement proved to be the ideal solution for the various challenges that the design team had set for the roof. “The canopy acts like an ‘umbrella’ component - the architect had envisaged it like a cloud hovering over the complex below but largely separate from it physically and structurally. Therefore the canopy had to be lightweight but with a sense of solidity to it. The architect also didn’t want any joints - the surface had to completely smooth and continuous, rather like a Cadillac!” 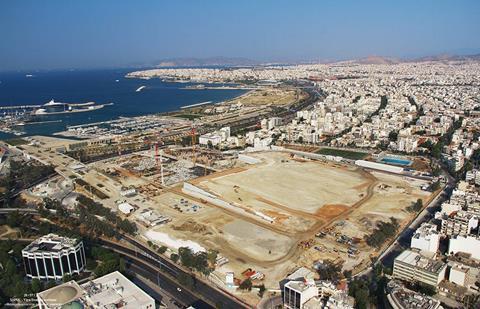 Expedition director Andrew Weir offers two other key early constraints. “Also, by the time we came to work on the canopy, the structure of the building underneath had already been fixed so the roof had to be designed within the confines of the exiting base structure below.

“And, as the building is in a seismic activity zone, it is entirely supported on giant base isolators. These comprise bearings placed on the foundations that essentially enable the building to slide if an earthquake were to strike, thereby avoiding absorbing the horizontal force of the tremor.”

At almost 3m wide, the base isolators at SNFCC are among the largest anywhere outside Japan, and it is only the second time the system has been used in Greece. Various material options were explored to satisfy this diverse range of requirements, with steel consistently emerging as a preferred choice. But these ideas were always eventually abandoned, largely because none of them were capable of satisfying the requirements for concealed joints. It was partially on this basis that ferrocement was eventually selected. 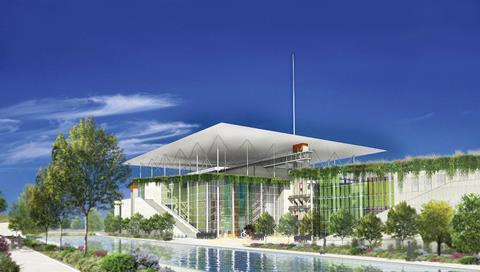 A visualisation of the completed complex

Ferrocement is a thin, compound material that can be easily curved for multiple relatively lightweight applications, hence its common use on boat hulls. It is formed by a cement mixture being pumped into a layered mesh of woven steel and rebar rods. It therefore has a far higher percentage of reinforcement than standard reinforced concrete but, as Hurstwyn points out, is incredibly “strong, airtight, lightweight and thin, with a high degree of formability, and more dynamic than concrete”.

At SNFCC, the canopy is comprised of a ferrocement skin on its soffit and roof with a steel diagonal frame separating the two. Steel therefore still accounts for some of the structure within the roof, but it is invisible externally and plays a secondary structural role to that of the ferrocement. “We did consider casting the internal support framework in ferrocement too,” explains Hurstwyn, “but steel proved more efficient for carrying the bracing loads.”

The underside of each ferrocement plane has steel rebar ribs running in two directions and varying in thickness from 25mm to 55mm. The roof itself has a maximum depth of 4.5m at its centre, which tapers to a thin profile of about 100mm at its edges across a span of about 50m in all four directions of the canopy square. This in itself indicates the high degree of formability inherent in ferrocement, as does the neat concealed gutter detail incorporated into the canopy’s outer edges, forming a seamless visual trim.

Architect Renzo Piano envisaged the SNFCC rising out of the ground like a dislodged piece of the earth’s crust. The canopy represents a cloud hovering over its highest point

The canopy itself comprised ferrocement panels measuring 3.2m x 6.9m and clamped to an internal steel bracing system with spider brackets. The first step of their construction is to lay the mesh, around which the skin is formed. The upright steel rib channels come next, placed within moulds into which cement is pumped. The panels are then spliced together with a mortar fill, which bonds them to form a giant, composite entity measuring 10,000m².

Both Weir and Hurstyn maintain that the quality of the splicing will be “crucial” in order to deliver the seamless, unjointed finish required. Once bonded together, the canopy will then be painted white, which further erodes all visual trace of the joints, as well as helping to deliver the architectural “cloud” analogy. Additionally, had ferrocement rather than steel also been used the internal bracing system, then additonal splicing would have been necessary around all the bolted spider connections between the skin and the frame.

Inevitably with such an innovative material application, there have been technical challenges. According to Hurstyn, the use of ferrocement on this kind of scale was “completely uncodified” and a huge amount of research had to be undertaken so that the design team and more pointedly the contractors were confident that the material would perform as expected. The local contractors used were equally unfamiliar with the building application of ferrocement.

This involved building a number of full-scale prototypes and employing the ferrocement roof system on a visitor pavilion and cafe already built on the site, which was essentially deployed as a guinea pig for what was being proposed on a much larger scale next door. A number of splicing tests were also conducted.

Preventing sag and deflection proved to be among the biggest challenges, as Hurstyn explains. “Pre-setting of the roof is crucial, as it covers such a large area and is formed from a thin, hollow composite; one end could sag before the other is finished. So we have had to implement a strictly timed assembly programme that ensures evenly dispersed load over the area being constructed.” 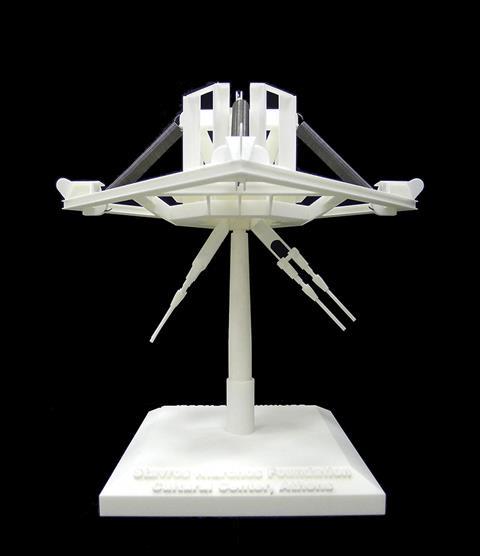 Other methods were more low-tech - bags of sand were commonly used to measure deflection rates. Wind loading tests were also conducted, as were - incredibly for Athens - snow loading tests. “Athens doesn’t get much snow,” grins Weir, “but on the rare occasions when it does, you can imagine a huge dump of snow on the roof because it covers such a large area. Also, prevailing wind direction in Athens would mean that the snow is likely to blown to one end of the roof rather than evenly dispersed. We had to be confident the canopy could support this.”

How the canopy is supported is the last but hugely important part of the roof’s construction. The canopy sits on 30 steel columns arranged on a 15m grid. Due to the sloping ground, the columns range from 10m to 18m in height. The braced outer ring of columns supports a precipitous 12.5m cantilever around the canopy’s edge. But even more ambitious is the soaring 60m column-free span at the centre of the canopy, left open to accommodate the opera house auditorium located here in the building below and punctuated only by a towering carbon fibre mast feature that extends 20m above the roof. 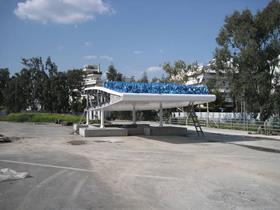 Bags of sand test loading and deflection on the canopy

The column heads comprise an innovative concealed splayed detail that acts like a giant suspension system for the canopy. A spring damper system within the heads ensures that the canopy can move vertically to accommodate vertical loads. In an earthquake these will protect the canopy from collapse from vertical seismic forces.

Hurstyn also reveals that in order to further mitigate against sagging, the temporary works framework that will support the roof during construction will be set slightly above the required finished level in order to let gravity gradually pull the roof down into its correct position above the columns headers. 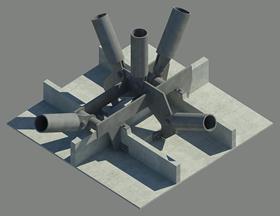 The project is not yet complete, but already each strand of the design team has a view on what the SNFCC’s enduring legacy will be. For Hirko, it will be one of philanthropy, durability and collaboration and he describes the unique lump sum procurement route adopted as key to isolating the risk and delivering the efficiencies essential for a project of this scale to work.

But inevitably for the engineers, the roof remains the star of the show. “As with all structures it’s about finding the right material for the job,” explains Hurstwyn, “but this had the added challenge of taking something relatively untested from the domestic scale to the industrial scale.

“We certainly hope this building will represent a serious step-change in the industry which proves that ferrocement can be applied on this kind of scale and ensure that from here onwards, it is considered a legitimate construction material.”

This article was published in print with the headline Greek unorthodox