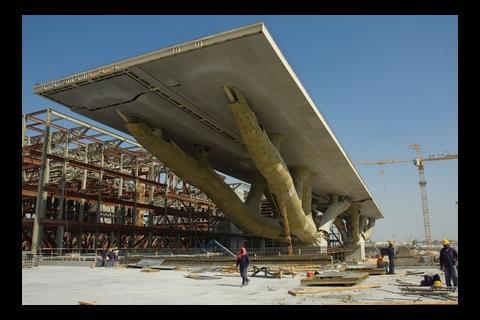 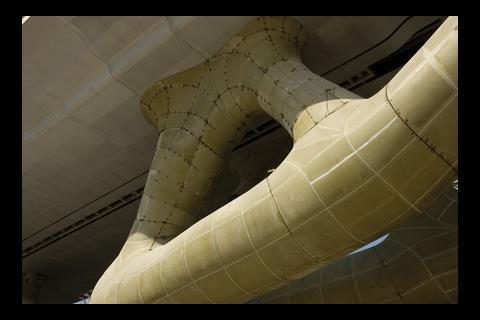 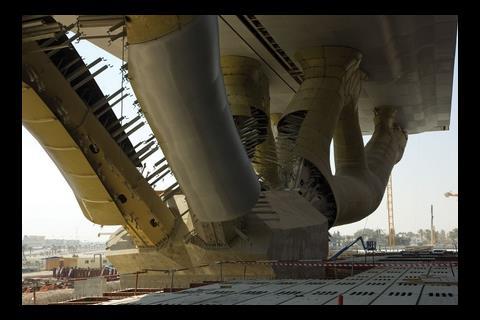 The sidra “trees” grow out of enormous concrete foundations. The main structural elements are clad with specially shaped steel panels that give them its organic appearance 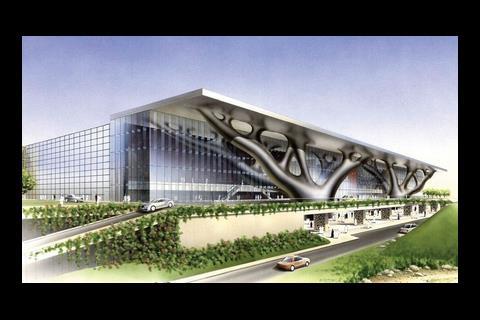 Visualisation showing how the trees will make a grand entrance to the centre. A glass facade slots between the front and rear branches 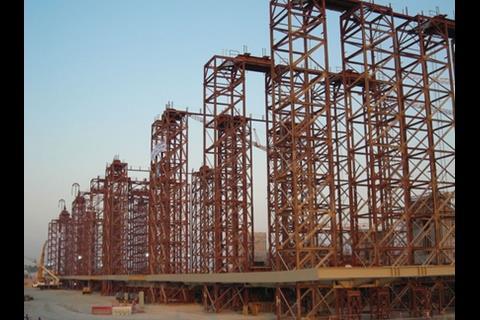 The steel deck was built on the ground in two pieces and jacked into position, as this was safer and minimised temporary works. 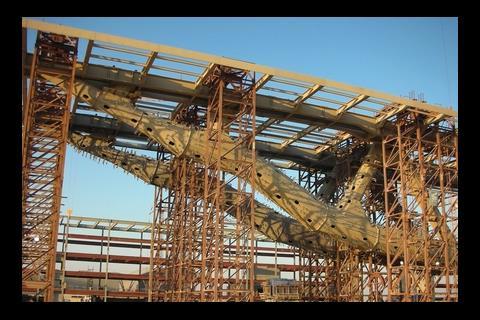 The branches were also built on the ground in sections and jacked up. 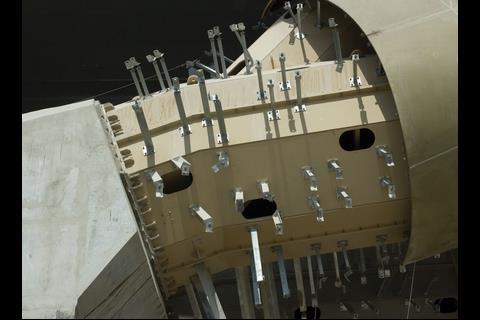 Creating massive organic shapes out of metal is one thing. Getting them to support thousands of tonnes of structure is quite another. Thomas Lane reports on the building of the Qatar National Convention Centre

Robert Obbard is standing outside the door of his site hut looking at a concrete roof deck a quarter of a kilometre long and 30m wide, held aloft by two perfectly natural looking, but massively oversized, trees. ”I think this is the most complicated piece of steelwork I’ve ever seen,” he says.

Given that Obbard has been in the structural steel business since the sixties and was responsible for Swiss Re, three Canary Wharf towers and a smattering of Calatrava bridges, this is quite a statement. “If anyone presented this to me in the UK I’d say ‘you’ve got to be joking – how are you going to pay for it?’” he continues. “Here, of course, it’s different.”

“Here” is Qatar, the Middle East’s market of the moment. Those branches that writhe organically out of two huge concrete bases are modelled on the sidra, an evergreen that occupies “a special position in the hearts of the Qatari people”. At least that’s the opinion of the project’s client, the Qatar Foundation, which has adopted it as its logo.

The idea is that the sidra will form an appropriate and impressive entrance to the 40,000m2 Qatar National Convention Centre which is being built behind them. This bit of the job is so specialised that it has been let as a self-contained package to Belgian steelwork specialist Victor Buyck, which is building it, and to consulting engineer Buro Happold, responsible for the structural design.

The sheer scale of the job, coupled with the organic shapes of the structure, make it a fiendish one to pull off. “It’s conceptually and technically complicated and difficult as it has a freeform, curvilinear surface,” says Obbard. His job has been made even more problematic by the need to make all the components for the trees and the deck they support in a specially built plant in Malaysia, so everything has had to fit into 12m-long shipping containers.

The two trees grow out of two concrete bases, positioned a third of the way along the facade. Each has four main branches that are about 7m in diameter at the base, and 4m at the top. A pair extends towards the far end of the deck; the other inclines towards the centre section. A glass facade will be inserted between the branches, suspended from the deck above, so half will be on the outside and the rest inside.

The deck has to take considerable loads. The extreme angle of the branches means that something like 6,000 tonnes of the structure wants to fall outwards and pull the deck apart. It also has to be stiff: any movement at all and that glass facade will crack …

According to Obbard, building the structure conventionally from the ground up was going to be too difficult because all the work would have to be done at height.

If anyone presented this to me in the UK, I’d say ‘you’ve got to be joking – how are you going to pay for it?’ Here, of course, it’s different

“To assemble the roof 30m in the air would have cost a fortune,” he says. “We would have needed 104 support towers.” Instead the team opted to build everything on the ground and jack it into position, which meant that “only” 46 towers were required. Bizarrely, the foundations for the structure were built after the roof deck and trees were constructed.

The roof deck was the first element to be constructed, built in two big sections on the ground. To get around the problem of fitting structural elements inside a shipping container, they were constructed from plate steel sections bolted together on site. The massive tensile forces in the roof were tackled using 76 Macalloy bars: these are a high-tensile reinforcements that can be quickly connected together by an effective coupling mechanism.

The temporary towers were erected around the roof sections, and strand jacks were fitted at the top. The two roof sections were then jacked into position, where they could act as a lifting frame for the branches. The ends of the deck were positioned 625mm higher than the centre to allow for the weight of the branches. The deck was then topped with 200mm of concrete, and cladding was fixed underneath.

Working out how to make the branches was also challenging, as creating organic shapes that curve naturally yet hold up thousands of tonnes of structure is not easy. According to Brian Cole, Buro Happold’s engineer in charge of the project, there was little to go on. “The architect had drawn the geometry of the branches quite crudely so part of our work was to smooth that out and process the design for all the elements of the branches.”

They opted to create a primary structure to take the loads and clad it with panels. Making the panels out of a composite material such as grp was suggested, but rejected by the client. “It wanted it done in steel,” says Obbard.

Like the roof deck, the primary structure of the branches was made from plate steel up to 60mm thick. It was octagonal in section and had to be big enough for maintenance crews to crawl inside. Small sections at the ends of the branches were fabricated as whole units, further down as two halves and the larger sections near the base made as four sections so they would fit inside the containers. These were bolted together on the ground, and adjustable metal struts or “stools” were fixed to the structure ready for the cladding panels. These structural sections were strand-jacked into their final position under the roof deck.

Cole describes installing the panels as an “enormous challenge”. There were 4,700 of them, 70% with a single curvature but 30% with a double. Additionally, each was unique. “The difference between some of the panels was virtually undetectable,” adds Obbard. Ensuring the right stool was in the right place and at the right angle on the primary structure, with the right panel fitted to it, was a massive logistics operation. Software was developed by Buro Happold to get the geometry right. “The panels were done by digitally transferring the design to Victor Buyck’s machines in Malaysia,” says Cole. They were formed from 6mm-thick weathering steel and have ribs on the rear to help them hold their shape. These were fitted to the stools, which were adjusted so each panel was flush with its neighbour then welded together for a seamless finish.

The trees are nearing completion, so the next stage is to paint them the right shade of grey prior to the installation of the glass curtain wall. “I reckon it will be one of the wonders of the world when it’s finished,” says Cole.