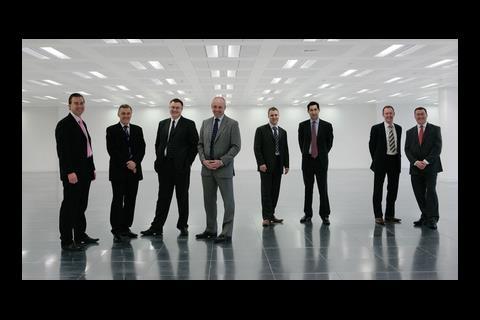 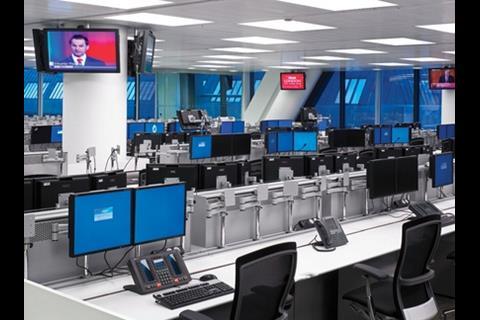 8build’s £5m fit-out for Macquarie bank in the City

8build was formed by senior managers at ISG who spent years observing the follies and failings of the traditional industry – and set out to solve them with their own company.

Katie Puckett finds out more about their thinking

There can’t be many wage slaves who haven’t dreamed of setting up their own business, even if it’s only for a wistful five minutes on a wet Monday morning.

The founders of fit-out contractor 8build are among the few who have actually gone and done it. In September 2005, Nigel Bellamy, Steve Oakford and Mick Mannion started out with a borrowed office in the City and an ambition to do things a bit differently.

Now in their third year, they have already smashed their five-year turnover target of £25m by £7m and were voted entrepreneurs of the year at the Building awards in May. They are on site at a £10m office fit-out for British Land at 338 Euston Road, their biggest job so far, and have just secured a £40m fit-out for a company in Canary Wharf.

The secret to their success is a mix of worldly experience, industry contacts, and a well-honed strategy based on the principles of Egan and Latham; but its origins lie in general disgruntlement. Bellamy and Oakford reckon they spent about four years talking about all the things that irritated them about the construction industry, and then a year thrashing out a business plan that would set them to rights.

“We just added up all the frustrations we experienced, analysed each one, thought how it could be done better and worked it into a philosophy from there,” says Bellamy, the shorter and more understated of the two.

“It was a risk. We were highly paid people in senior positions; we could have kept in that comfort zone and had a nice life. Or we could have done something different.”

If they’d waited three months longer they would have been due “big bonuses” from their employer. Why not hang on? “If you do that, then you end up sticking around for your Christmas bonus and it goes on,” says Bellamy. “If you're going to do it, you’ve got to do it. It shouldn’t be about money.”

Instead, they mortgaged their houses and worked for a year without pay to fund the entire thing themselves.

We wanted to work with nice people … they know us with all our faults and we all cover each other.

Of course, the fact that they were highly paid people in senior positions meant they were well connected. In 1989, Bellamy and Oakford were part of the team that set up Stanhope’s fit-out business, which later became ISG InteriorExterior, and they spent 16 years building it up from nothing to 500 staff. They regularly worked with fellow founder Mannion in his role as client representative for British Land, the blue-chip developer that gave 8build its first job.

“I think it was a great help that they knew us so well,” says Oakford. “Mick used to be their rep and we were the team who delivered it, so as far as they were concerned it was: carry on, we trust you.”

The three founders set about attracting an experienced management team, used to heading much larger projects than any the firm has secured so far. This was a deliberate – if expensive – strategy to gain immediate credibility. There are eight directors, including Bellamy and Oakford, all of whom have worked together for many years. The directors were attracted partly by the

no-hassle philosophy, and partly by substantial equity stakes in the firm. “You need a strategy to attract the best people,” says Oakford. “If you try to do it with salary packages, it’s a tough marketplace.”

“We’re not greedy, we’re trying to give something back,” adds Bellamy. “Many companies are founded by one or two guys who hold on to everything as long as they possibly can. We’ve done the complete opposite of that. The guys have come in

with shares, they’re personally motivated, it’s their business as well as ours. ”Hiring experienced staff wasn’t the only significant initial outlay. “The days of two guys starting up without an awful lot of back-up and systems and procedures in place are long gone,” says Oakford. “You have to demonstrate high levels of competence as a business from day one. In the modern construction industry, you have to have an awful lot of accreditation to be a contractor.”

8build’s list of credentials include the ISO 9001 quality management standard, CHAS for health and safety and the government's Constructionline prequalification scheme. “When you’re tendering, there’s always a question about whether you have ISO 9001, and you have to be able to say you have.”

Putting a plan into action

8build sum up their big idea as “lean construction”. With its central ethos of partnering, reducing risk and therefore paperwork, this draws on the Latham and Egan reports in the nineties. However, 8build had the advantage of a completely clean slate to put it into action.

We added up all the frustrations we experienced, analysed each one and thought how it could be done better

8build will do things the traditional way if the client wants, or allow it to choose just some elements of lean construction. Oakford says every client has used some aspects.

The “leanest” example to date has been a £7.5m job in Victoria for a FTSE 100 energy company, fitting out its head office and dealing facilities. Bellamy says most of the items on their list were taken up: a slimmed down management team, partnering agreements with subcontractors, fortnightly payments and no retention, no onerous contract conditions, just a standard JCT. On certain items, such as services, the client’s design team has negotiated with the suppliers and 8build has reduced its mark-up to recognise the work they’ve done. As an example of how much money can be saved, one subcontractor has reduced its prelims and mark-up from 15% to 12.5%.

To keep overheads down, 8build employs no estimators, so all the pricing is done by financial management surveyors who stay with the project throughout. There are no project planners either – 8build has invested in software so project managers can produce all the programmes. Tender pricing is meticulous – subbies are chased for details so they can begin as soon as the job is won without going back to the market. “We price the final account at tender stage, so if someone hasn’t done as comprehensive a job their price may be lower,” concedes Bellamy. “There’s always that danger but we’ve got a philosophy to maintain.”

Another part of the philosophy is 8build’s social conscience. It has gone carbon neutral, it is part of the Inspire scheme in Hackney which gives work experience to children who are interested in construction, and it takes at least two graduates a year on its training scheme. It’s also about to start on a £151,000 not-for-profit project for the Salvation Army.

8build’s founders don’t know where the future will take them. They had had enough of working for shareholders’ targets and are enjoying the freedom of being their own bosses. “No matter how much science you try to apply, if you follow the opportunities as they come up it takes you where it’s going to take you,” says Oakford.

Bellamy says they’ve turned down work rather than risk disappointing a client. “The honest approach wins through in the end. We have no borrowings, no other company that has an interest, no overdrafts, we’re cash positive and we’re already trading profitably. We have no shareholder to satisfy, or banks that have to be repaid every month. We’re our own masters really. We don’t need to scattergun the industry.”

“We wanted to have a bit more fun; we thought the old way of working was very staid,” says Bellamy. “We wanted to work with nice people and we’ve got a nice team ethos going – all the people here are very experienced, they know us with all our faults and we all cover each other.”

Oakford continues: “You reach that stage in life when you say, ‘if we’re going to do something, now is the time to do it’; you either do it or you don’t. I didn’t want to get to the end of my career and look back and say, ‘What if we’d given that a go …’”