‘They don’t want me here’: Points-based immigration in construction

The government’s new points-based immigration system looks set to put an end to years of construction’s reliance on a non-UK workforce. And with migrant workers now wary of a less welcoming environment, many are already heading elsewhere. Tom Lowe reports on the likely fallout for the industry 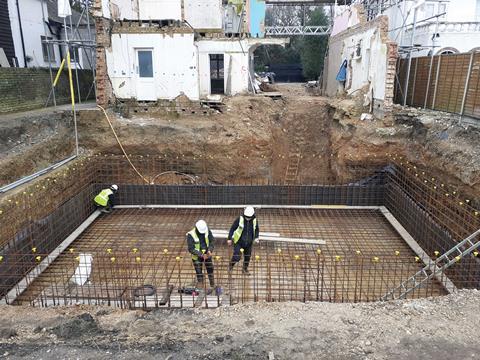 Four Romanian workers are standing in a waterlogged pit on a cold February morning in east London. Stepping across a steel mesh cage covering the ground, Alin, Rica, Johel and Mihaita are building the basement of what will become a £2m house in upmarket Wanstead. Speaking to each other in Romanian, they are, for now at least, a familiar sight in London’s construction industry, where 28% of the workforce are EU nationals.

“They’re like family,” says Azad Azam, managing director of Design Plan Build (DPB) the contractor working on the scheme. “They’re really good guys, and they’re loyal. We socialise together, play football together.” Last week Alin, 32, was driven to hospital by a DPB colleague after falling ill. “We were with him all day,” says Azam. 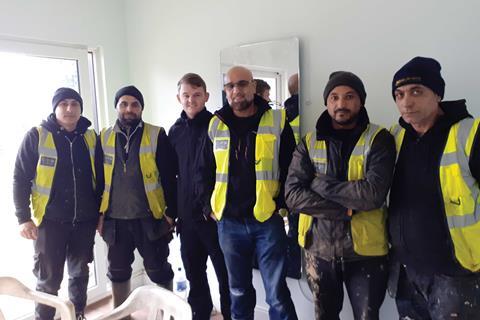 Johel, Rica, Mihaita and Alin with Design Plan Build owner Azad Azam (centre, to the right of Ben Dalton, the architectural designer on the job)

Many of Azam’s team moved to the UK from eastern Europe before the general election and had been planning to settle here. Now, with the Conservative landslide win at the ballot box, the UK’s departure from the EU confirmed and an uncompromising new border policy announced, those plans have started to look a lot less certain.

Although Alin, Rica, Johel and Mihaita have all applied for settled or pre-settled status, in 10 months’ time, workers like them will not be able to come and work in the UK. With an annual salary of less than £23,000 each, they are well below the threshold of £25,600 needed to earn 20 points in the new points-based immigration system. They will not get the 20 points given to those with a skilled job, since the government does not consider their roles skilled. All but one would fail to get the 10 points earned for speaking English.

Neither would they be guaranteed to get the 20 points earned by being on the government’s list of “shortage occupations”. As a site manager Alin would qualify, taking him to 50 of the 70 points needed to be granted a visa. But Johel, Mihaita, who are labourers, and Rica, who is a steel and formworking specialist, would not. 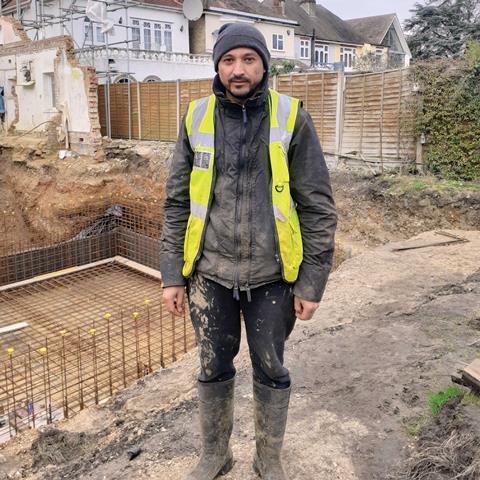 Construction firms are now in a race against time to adapt to the new rules by the time the transition period ends on 31 December. Some in the industry have expressed alarm, such as Mark Reynolds, skills lead at the Construction Leadership Council, with the Mace chief executive saying the new rules are likely to “make it harder for the UK construction sector to deliver the homes and infrastructure we so desperately need”. Civil Engineering Contractors Association chief executive Alasdair Reisner admits “there are reasons for optimism” but has called for a “guarantee that employers in the infrastructure sector will be able to recruit new entrants at a sufficient rate to deliver the forthcoming infrastructure revolution”.

While the upheaval the new system will cause firms in construction and other sectors has been widely reported, the people most directly affected are the EU nationals themselves. Millions of EU workers and their families across the country are making arrangements to stay, changing their minds and heading back or going elsewhere in Europe. Those that are already here have the option of applying for settled status, which gives them the right to stay, though it does not grant full citizenship. Recent arrivals, who have been here for less than five years, can apply for pre-settled status, which comes with greater restrictions but with the promise of being eligible for full settled status once they have lived in the country for five years. EU nationals can apply for full citizenship 12 months after receiving settled status.

The mass deportations some EU nationals feared have not materialised, but for many the necessity to apply for a new status in a country which formerly welcomed them without barriers has made them wary

Over three million EU nationals living in the UK have now applied. Applicants must prove their identity, provide documents proving they live in the UK, and declare any criminal convictions. Over 90% have had their applications granted and now have the right to remain. Just six have been rejected, on grounds of criminality. Home secretary Priti Patel called the scheme the “biggest of its kind in British history,” with caseworkers processing 20,000 applications a day. The mass deportations some EU nationals feared have not materialised, but for many the necessity to apply for a new status in a country which formerly welcomed them without barriers has made them wary.

For Alin, 32, the effect on his future plans has been profound. Originally from a small town in Romania, he moved here five years ago to work for DPB. His wife Mariana and two children had stayed in Romania with the intention of joining him when the time was right. Just before Christmas, Azam had found a job for Mariana at a local hotel, arranged a flat for the couple and their family, and had helped Alin apply for the right to permanent residency in the UK, which was granted. With a family home ready to move into, and a secure job, Alin should have had a lot to look forward to.

But then Mariana changed her mind. For her, the message from the Conservative Party’s landslide election victory on the other side of Europe was loud and clear. Alin may have been granted settled status, but he did not have UK citizenship, could not vote, and in many respects was a second class citizen in a country apparently gripped by xenophobia. Mariana decided it was better for her and her children to hedge their bets in Romania rather than risk everything to live in the UK, and so Alin never moved into his flat.

For many like Mariana, the UK is no longer a country where EU migrants can feel welcome. Alin’s brother, who has lived and worked in the UK for three years, has already moved to Spain, saying before he left: “They don’t want me here, so I’ll go and work somewhere else.”

Figures from the Office for National Statistics show Alin’s brother’s decision to leave is part of a growing trend. Some 151,000 EU nationals left the UK in the year to June 2019, the highest on record and double the number who left in 2013. Meanwhile, net migration from the EU has fallen by 141,000 since the 2016 referendum, and now stands at the lowest level since 2003. At the current rate, net EU migration will dip into the negative within the next five years. 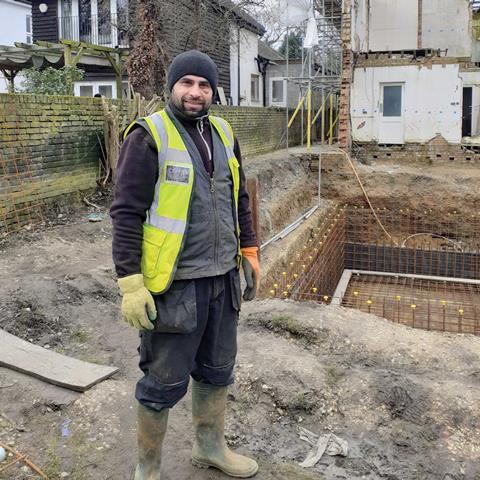 While larger firms are more likely to have the resources to adapt, this is a major headache for small and medium-sized contractors like the one run by Azam. EU nationals comprise the entire building workforce of DPB, a £1.3m-turnover firm specialising in housing schemes. Business is going well – the firm recently completed a £4m job building nine houses in Basildon, and Azam expects turnover to increase to £2.5m this year.

But the decline of immigration from the EU has already started to cast a shadow over the business. Last year Azam was offered a contract on a large residential project which the client wanted to be completed within a year. To deliver on that timescale, he needed to double the size of his team, so after job postings in the local job centre went unanswered, he called up his recruitment contacts in Romania. But he encountered a new problem: “They didn’t want to come,” he says. “They said ‘why would we come over when we can go to other European countries, and they’re more welcoming?’”

Previously the strength of the pound had been more than enough to make up for the British weather or any local hostility. Since the referendum, which has seen sterling slump against both the Euro and the Romanian Leu, UK wages have become somewhat less alluring. And it seems that many potential migrants simply no longer see the UK as a safe and reliable place to come and work. According to Alin, many potential migrants in Romania have been put off from coming to the UK over uncertainty of what they’re status would be here: “There’s rumours going round over there that if you leave, you won’t be able to return, that doors will be closing, you’re all going to be kicked out.”

A deeply unsettling reminder that, as immigrants, nothing can be taken for granted

Azam’s late father, who moved to the UK from Pakistan in the 1970s, never felt fully secure in the UK, telling his son: “There’ll come a day when we’ll be told to leave.” Even after living here for decades, the fear of being suddenly uprooted and deported never left him. The Windrush scandal, when some people were wrongly detained, threatened with deportation, and, in at least 83 cases, wrongly deported from the UK by the Home Office, was, for many people of non-British heritage, a deeply unsettling reminder that, as immigrants, nothing can be taken for granted.

We want to stay

Yet for Alin and his Romanian colleagues at DPB, staying in the UK is still their preferred option. All four are from Focsani, a small town at the foot of the Carpathian mountains about two hours’ drive from the Romanian capital of Bucharest. Over the last two decades the population has declined from over 100,000 in a 2002 census to under 80,000. “There’s nothing there,” says Alin. “No money, no good health services, no good schools.” 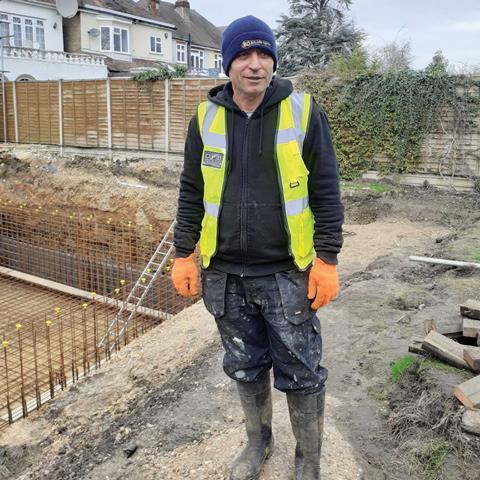 Rica, 58, like Alin, has a family back in Focsani which he plans to bring to the UK. His two sons, aged 15 and 16, both excellent football players and avid Arsenal fans, are doing well in school and want to come to the UK when they finish their studies in September. Johel, 41, has a 16-year-old son he too plans to bring to the UK in September along with his wife Gina. Mihaita, 27, wants to bring his mother over from Focsani to live with him in the UK, but in the meantime sends her £600 a month out of his salary.

The government is currently considering a proposal being drawn up by several industry bodies, spearheaded by the Construction Industry Training Board, which would aim to maintain access to EU workers within the new points-based immigration system. Under the plans, the Home Office would allocate a set amount of visas to a clearing house which would bring in workers and then contract them out to firms. Such a scheme would throw a lifeline to contractors concerned about their ability to source sufficient staff without freedom of movement. 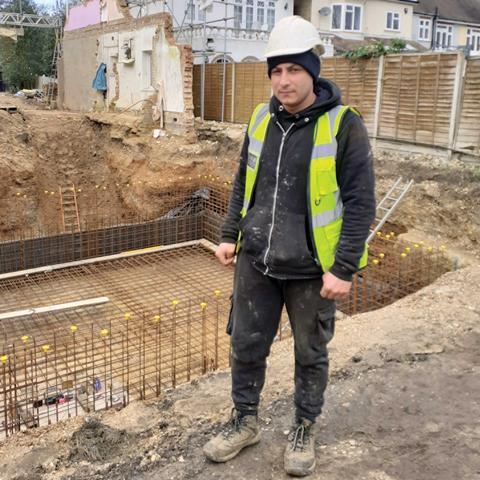 The site in Wanstead where DPB’s team are working is in a constituency whose Labour MP, John Cryer, campaigned to leave the EU. A short walk down the road is a traditional English tea shop, an unapologetically nostalgic throwback to an idealised 1950s Britain, complete with rows of bunting, pictures of a youthful Queen Elizabeth II, and a resident dog. Once, this idyllic vision of post-war British life may have played a part in making a life in the UK an attractive concept for people on the continent. These days, it has the opposite connotation.

The danger now for the Home Office is that it may find that migrant labour is not a tap that can be simply turned on and off. There is a risk that a foreign labour influx that has formerly been readily – and, to many leave voters, too voluminously – free flowing, could dry up even when restrictions are lifted. And it would be at just the moment that the government launches the most ambitious infrastructure and housebuilding programme for decades.