Toulouse School of Economics: An education

How do you get lots of natural light into a university building without it getting too hot? Thomas Lane finds out how to shut out the sultry Toulouse sun using medieval building materials and fresh air 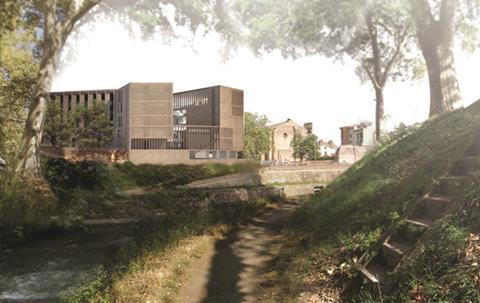 A brief for a low-energy building with lots of natural lighting in a very sunny place makes for a meaty design challenge. On one hand, lots of sun makes it easy to maximise daylight in the building. On the other, keeping the building cool is difficult and energy intensive. This is even more difficult if the site is in a historic setting, as using solar shading or double skin facades to protect it from the sun may not be an option.

The building in question is the Toulouse School of Economics. A hot, sunny French city near the Spanish border, Toulouse is known as the “pink city” after the colour of the brick buildings reflecting the golden sunlight. Most of these were built using thin Roman brick, and the school’s central location means the same brick is the only option for the cladding.

In December 2009, Grafton Architects won the competition to design the educational establishment in collaboration with services engineer BDSP. The two firms have collaborated closely to work up the environmental strategy for the project.

At present, the client occupies a building that regularly overheats in the summer and it is anxious not to repeat the experience. “Strict thermal comfort and daylight were the most important things we had to focus on,” explains Ivan Jovanovic, the BDSP engineer looking after the project. “The facade needs to balance the daylighting and cooling needs, which are diametrically opposed.”

Minimising energy use was also an important driver, he adds. The aspiration is a demanding 50kWh/m2/yr for heating, cooling and lighting with the expectation it will be 75kWh/m2 in the office areas.

Mechanical cooling will also feature, to ensure that a comfortable temperature is maintained at all times. Energy use will be minimised by using heat pumps to heat or cool the building, taking advantage of water from a nearby canal.

The brief was even more challenging because of the bulk of the structure - 10,000m2 - and site configuration, which made it difficult to channel sufficient daylight and natural ventilation into the building. The solution was to divide it into three irregular blocks, joined at the middle. The plan looks like six crooked fingers - with spaces between the blocks used as shaded courtyards, echoing those typical of medieval Toulouse.

Dividing the building up in this way took care of the daylighting and natural ventilation requirements. But it created a new challenge, because the facades would face in different directions. “The building doesn’t look that complex when you look at it on paper,” says Jovanovic. “But because of the courtyards it means there will be 14 different types of facade, depending on orientation and treatment.”

BDSP had to find a way of maximising daylight while minimising solar gain that would work regardless of facade orientation. The answer was to create three different glazing scenarios, which could be used across the whole building. The areas with the most sun will get less glazing, with 30% of the facade glazed, more shaded areas will get 50% and the fully-shaded areas, 70%.

Solar shading will still be needed for the most exposed sections. These will be vertical brick sections 800mm deep, to minimise visual impact. Grafton wanted these to be 400mm, but this wasn’t deep enough to shade the sun.

BDSP decided that a daylight factor of 2% was sufficient, in a bid to keep the window area down. This is low by UK standards, but Jovanovic points out that Toulouse is much brighter than Britain, so the building should not be gloomy inside.

The next stage was to model each of the facades, to see how much sun would fall on them during the hottest season. Based on the results, a glazing ratio for the three facade zones was developed. Exposed, south-facing facades will feature shaded glazing of mostly 30%, whereas north-facing facades that face into the courtyards will feature mostly 70% glazing.

The design was tweaked to satisfy client and architectural requirements - so, if more daylighting was needed in an area, the amount of glazing was increased, even if this would increase energy use. Jovanovic says the final configuration is very close to the energy-efficient optimum scenario modelled by BDSP.

Most of the building will comprise cellular offices, so BDSP wanted to include windows with top and bottom lights, operated by a building management system (BMS). This would allow cooling night air to circulate though convection.

Visually, however, this was going to be too fiddly. Instead, each office will feature a window split vertically to create two side-hung panes. The smaller pane will be 300mm wide and will be operated by the BMS. The other pane will be wider and opened manually. Jovanovic says air will still circulate and claims natural ventilation will keep the building cool for 75% of the year.

THE CLADDING IN DETAIL

The windows will be conventional double-glazing units, housed in thermally broken aluminium frames. The windows will be openable and feature two side-hung opening lights. Low-emissivity coatings will be used on each pane, with one coating helping to keep heat in the building and the other helping to reflect heat from the sun. The glass U-value is 1.2W/m2/K and the overall U-value for the window is 1.6 Wm2/K. G-values are more critical for this type of application - here the G-value will be 0.5.

The brickwork will be the traditional Toulouse variety, the Roman brick, which typically has dimensions of 420mm x 50mm. According to Grafton Architects, many buildings constructed in Toulouse in the eighties and nineties feature brick slips. This building will feature proper 100mm deep bricks that are made locally in moulds. The bricks will be of a reddish hue, but with some variation. A lime mortar will be used and will contain some cement, which will make bricklaying easier.