Will the chancellor see construction as a special case in next month’s Budget?

The construction industry has set out its case for a wide range of measures to boost companies facing “extremely challenging times” and help to drive the economy ahead of the chancellor’s Budget in four weeks’ time. 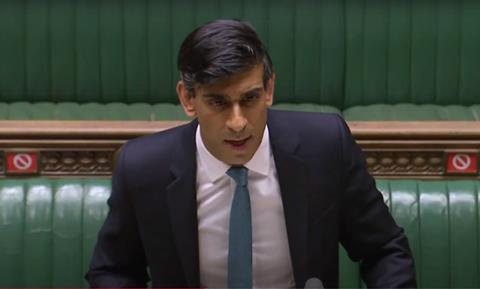 The letter acknowledged that government guidance had enabled construction sites to remain open during much of the pandemic, and that it had provided “ongoing assistance to our businesses and workers”.

However, the CLC warned that the financial impact of project delays, lower productivity on sites and contractual disputes meant that “without further financial support, many companies will become insolvent”.

In addition to businesses burdened by covid-19 rules, it said they are also feeling the impact of Brexit and preparing for the rule changes on IR35 and the Construction Industry Scheme.

The CLC, alive to the current strain on the public purse, said it recognised the difficult decisions facing the chancellor and so had decided to focus on interventions that would immediately drive economic growth and market confidence.

According to Graham Watts, the CLC’s co-chair of its Building Safety Workstream, the requests have been fine-tuned in discussions between the CLC and ministers. “The way the CLC has been working over the last year is a really close relationship with government,” Watts added.

“Each of those proposals has been worked up in discussion with [government] officials, so nothing comes as a surprise and it means that I think it’s going to land more sensibly than it might do if it was just a lobbying group knocking on the door.”

Below is a closer look at key CLC proposals and how they might be viewed by the Treasury in the run-up to the Budget on 3 March.

Industry case to Treasury: Why key interventions are needed

The CLC’s letter is upfront about construction’s importance to the wider economy, pointing out early on that the industry contributes 8% of the UK’s GDP, employs over 10% of its workforce and that, for every £1 spent, the industry – made up largely of SMEs – contributes nearly £3 of value to the whole economy. Therefore, the argument follows, spending on its priorities should be seen as an investment in a nation struggling to get back on its feet.

Costing £525bn over 20 years, which works out at an eye-watering £26bn a year, the national retrofit strategy is by far the biggest single request in the letter. It would also require the existing workforce to be “more than doubled” to 500,000, with new workers undergoing an “intensive” training programme alongside piloting and field trials.

The programme would seek to make the UK’s 28 million homes, which currently account for 20% of the UK’s carbon emissions, more energy-efficient by installing improvements such as insulation and heat pumps.

Despite the price tag, Watts said the government would have to commit to it sooner or later if it wanted to reach its target of hitting net zero by 2050.

He said: “There has to be a retrofit strategy and the government will have to do something about that, otherwise it’s going to have to acknowledge that it can’t meet its commitments … none of these things are going to come cheap.”

But 2050 is still a long way off and, despite the economic benefits which the CLC claims it will bring, the government may feel that the existing Green Homes Grant will do for now.

Expansion of the Building Safety Fund

Having simmered away since the fire at Grenfell Tower in 2017, the cladding scandal erupted again this week. A rebellion of 34 Tory MPs over the issue prompted housing minister Christopher Pincher to promise a solution.

A cross-party consensus has formed that the current £1.6bn fund set up to cover the cost of remediating the UK’s dangerous cladding is not nearly enough. According to Watts, the true sum could be as high as £15bn.

Watts, whose work at the CLC is focused on building safety, said that he had been in discussions with officials from the Ministry of Housing, Communities and Local Government on the issue “every week for the last several months”.

He said that MHCLG “know full well the extent of the issue and they know that there’s not enough money in the current fund to remediate all the buildings with unsafe cladding on them, even over 18 metres, so we’re pushing against not necessarily an open door but an understanding that what we are asking for is not ridiculous. It’s necessary.”

Considering the pressure which the government is now under, this commitment seems like a no-brainer. Not taking the opportunity to decisively address the issue would be too damaging for ministers to consider.

Given the way the housing market has boomed over the past year in defiance of an economic catastrophe which has seen other sectors, such as hospitality, almost brought to a standstill, this policy could be the least likely to come off.

Introduced in July last year, the holiday has contributed to a surge in the housing market which saw property website Rightmove record its busiest-ever start to the new year last month, with site visits 30% up on the same period in 2020, before the pandemic.

Arcadis head of strategic research and insight Simon Rawlinson said he thought the likelihood of ministers opting for an extension was “minimal”, but it would have a positive impact if they did: “The argument for the extension of a holiday is that the trickle-down effects around the wider consumer economy are quite considerable in terms of what people spend when they move.”

He added that ministers will be wary of creating a repeat of the 2008 stamp duty holiday, which resulted in a sharp fall in housing transactions when it came to an end.

Construction Products Association economics director Noble Francis said the policy makes sense in the short term: “It not only increases transactions in the general housing market but it also boosts new housebuilding and residential repair, maintenance and improvements work, which often tends to occur within the first six to nine  months of purchasing a property.”

Nevertheless, further support for a still-thriving housing market is likely to be lower down the list of government priorities than it was last year.

With Sunak scrambling to find ways to replenish the public coffers, the Budget might seem like a counter-intuitive time to announce tax breaks. The government has already confirmed that the Reverse VAT charge will go ahead on 1 March, with the IR35 tax set to follow in April and an exemption on red diesel tax in 2022.

With the government championing construction as the driver of the post-covid recovery, however, there is a chance that the Treasury might reconsider.

“Reverse charge VAT is highly problematic for SME builders,” said Francis. “Given rises in labour and materials costs in the last few months, their margins have already been hit, even in sectors where activity levels are relatively high.”

He said that a simple six-month delay to the tax would not be enough, adding that Sunak should “withdraw its introduction, or it needs a longer-term delay and for government to work with industry to ensure that business models change over time”.

Watts suggested it was unlikely that ministers would consider scrapping the tax as an option, but he said he would not be “at all surprised” if there was some movement on its date of introduction.

With construction’s EU workforce falling by more than a quarter in the 12 months to the third quarter of last year, ramping up apprenticeships could be not only an obvious option for Sunak but a policy that could save the industry from disaster.

According to Watts, it is “perhaps the most important” of the requests in the CLC’s letter.

Construction Industry Training Board (CITB) head of policy and external affaird Mike Hobday said that the government had been working with the CITB and the industry via the CLC to ”retain existing apprentices and safeguard construction apprenticeships for the future”.

While this may not sound like the “extension” of apprenticeship incentives asked for by the CLC in its letter, the government may find that further falls in EU construction workers could require something to be done to avert major long term hikes in project costs and delivery times.

With a climbdown on the new points based immigration system looking unlikely, added support for apprenticeships could be a more realistic option for the government to address labour shortages over the coming years.