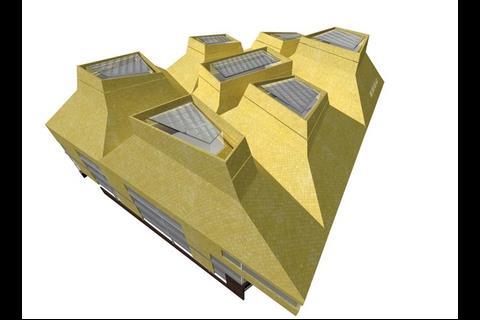 Changing the angle of one side of a roof “turret” had a knock-on effect on the rest of the roof design; a parametric model helped streamline the process of making changes 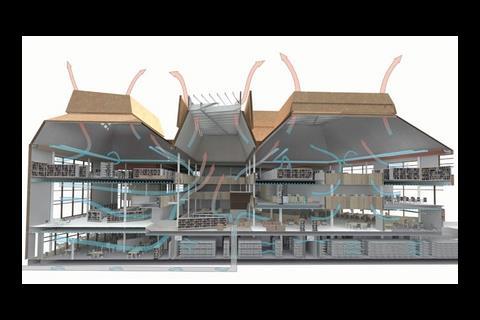 The Worcester Library and History Centre’s geometrically complex roof needed to bring light into the building as well as get air out. Luckily, a powerful parametric model came to the rescue, as Stephen Kennett discovered

‘We knew that if we wanted to win a project of this magnitude, we had to do something extraordinary,” says Matt Vaudin, a partner in architect Feilden Clegg Bradley Studios. The project in question being the £60m Worcester Library and History Centre PFI scheme, which has just started on site next to the River Severn. It’s the first building in the UK to bring a public and university library, a records office, an archaeology service and a council services access “hub” under one roof. And it is the roof itself with its gold alloy shingles and seven funnels-cum-rooflights that really sets the building apart. And as well as giving the structure its identity, the roof plays a vital role in its environmental performance.

Feilden Clegg Bradley’s design brought together several ideas it had been developing on other projects, most notably the National Trust headquarters in Swindon and the civic offices for Runnymede council, which used deep floor plates and were predominantly roof lit and naturally ventilated. For the Worcester project it threw in the idea of using cross-laminated timber for part of the structure for greater sustainability along with biomass for heating and riverwater for cooling. But the most innovative bit of the design was the process by which the structure of the roof was devised.

“We came up quite early with the idea of the roof having these prominent cones,” says Vaudin. “The idea started with wanting to maximise the size of the rooflights to get daylight down into the space and we also needed to think about how to get air out of the building.”

The geometry of the roof is complex. The easiest way to think of it is as seven truncated pyramids (see left). On top of each of these sit auxiliary pyramids which act as baffles. The lengths of the bases of these secondary pyramids, and the angle of their faces, all vary. The complexity is compounded by the way the bases of the baffles do not sit on the same plane …

At the early stages of the design the location of the funnels was largely dictated by the layout of the building below, while their volume was governed by the need to create a reservoir of warm, stale air that was big enough to create the stack effect necessary for natural ventilation.

“At this stage the design of the roof wasn’t set in stone,” says Vaudin. “But we did begin to think about how we might optimise the structure of the roof and how the contractor was going to build it.”

The architect then realised that each time the roof design was tweaked it would have an effect on the underlying support structure, as well the size of the rooflights, which could result in insufficient daylight coming in to the floors below and compromise the ventilation. There was another important consideration: a minimum space had to be maintained between the glazing and the baffles to allow for maintenance access.

At this point, the architect reached for a very large computer. Or rather it handed its plans to Richard Priest, an architectural software engineer, who built a parametric model of the roof using a program called GenerativeComponents, which is a plug-in for MicroStation.

Rather than sending the design changes to be checked by the structural engineers to tell us if it would work, we could do it ourselves

Priest’s programme allowed the architect to alter, say, the angle of one of the faces of the cones or its height; it then automatically rejigged the geometry of the roof to accommodate the changes with no input needed from the designers. It also incorporated the formulae used by the structural engineer, which meant that it could determine if a change would push the laminated timber structure beyond its limits. “It meant that rather than producing the design changes and sending them off for checking by the structural engineers, we could do it for ourselves,” says Priest.

The program also monitored what impact the changes would have on the size of the rooflights, determined if the daylighting would be sufficient and optimised the size and position of the fins to avoid glare and solar gain. Finally, it would calculate whether the volume of the cones was large enough to make the ventilation work.

“It gave us real freedom with the design without getting bogged down by the rules,” says Vaudin who estimates it has shaved about two months off the design process.

All this work was initially being done to produce visualisations for the bid stage of the project, but once the bid was won the model was developed to produce construction information.

One of the issues it solved was the way the baffles should sit on the truncated pyramids. The parametric model automatically generated the four corner points where they meet. “We found that the baffle surfaces under many design solutions tend to twist out of plane, which was not obvious on paper or even some manual 3D modelling,” says Priest. “This may not have been evident until construction but we were able to quickly see this issue and redesign them accordingly.”

The program automatically generates the accurate build-up of baffles and the position and size of the structure used to attach these to the main cones, saving time.

The design team was also able to eliminate 250 tonnes of steel from the roof simply by being able to quickly model forms and optimise the structure.

The project is due for completion in 2011 and the aim is to achieve a BREEAM “excellent” rating. But Vaudin says there is scope to go for “outstanding”. “For this you can apply for innovation credits. At first we thought about putting forward the river cooling system but actually the parametric model we’ve used is probably more innovative than that.”