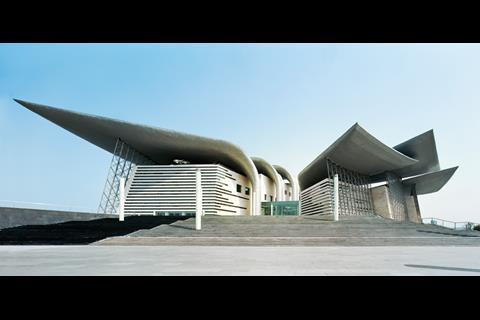 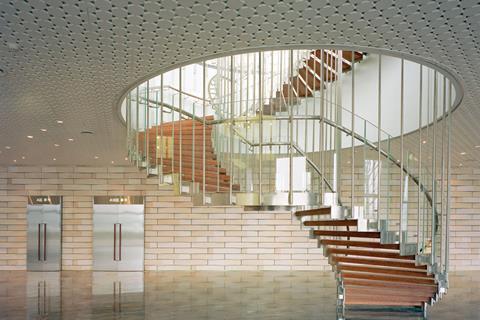 A suspended glass and steel staircase hangs from an upper gallery 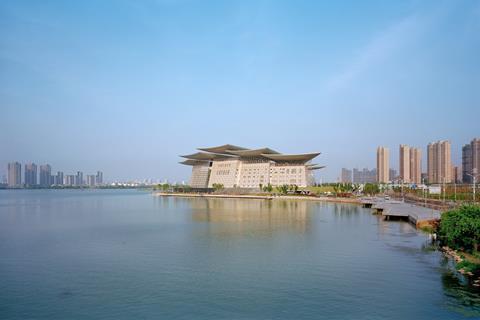 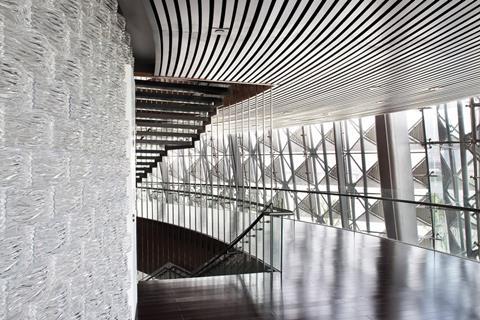 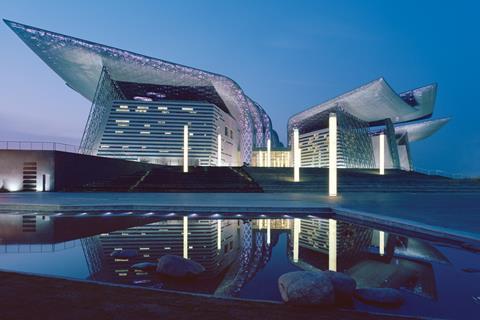 The building is lit up to spectacular effect at night 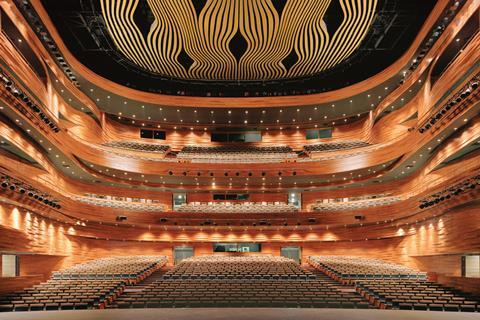 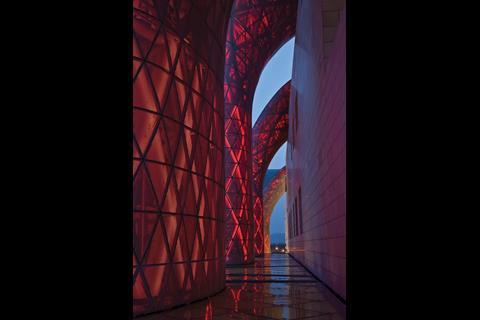 LEDs are embedded into the diagrid spaceframe that forms the wings 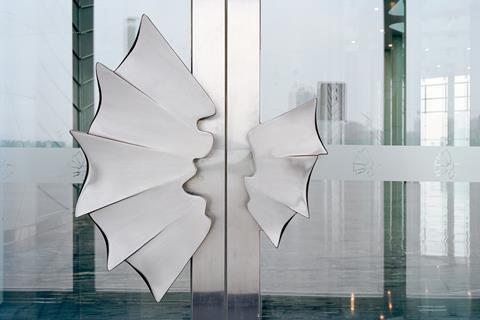 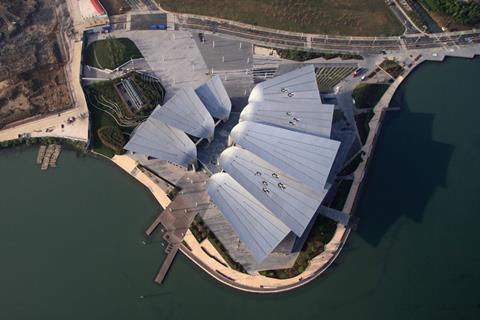 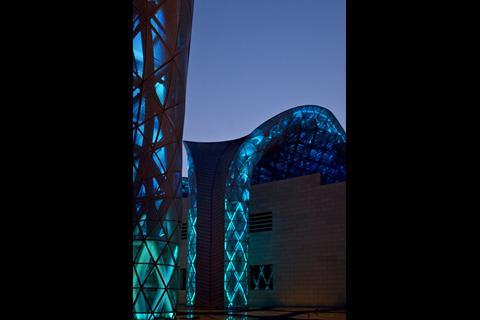 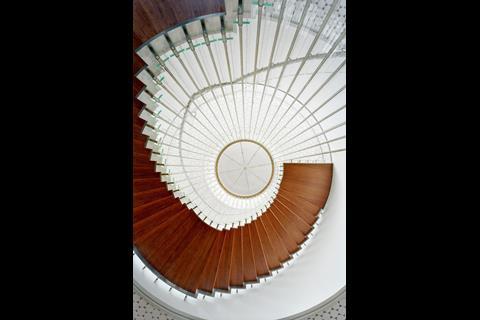 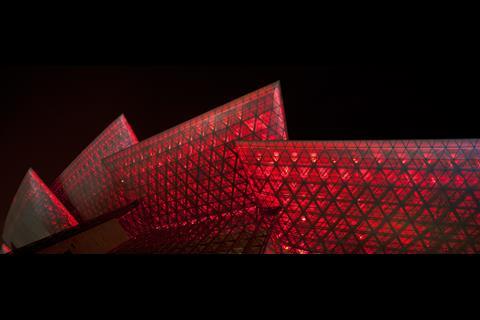 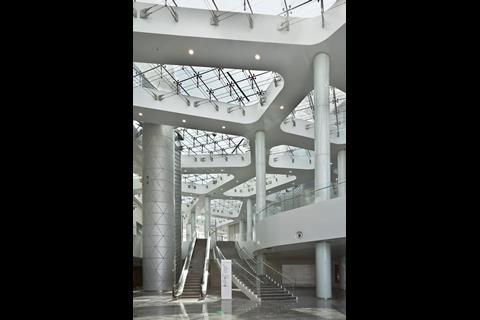 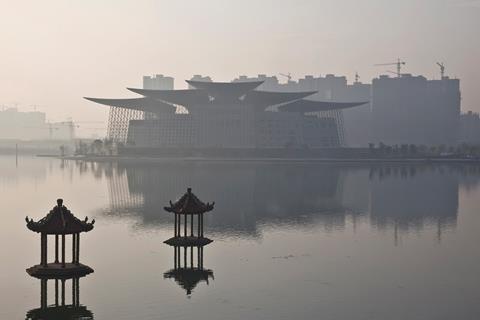 It is one of the ironies of modern society that while the role of symbolism in western architecture has gradually declined, the use of the term “iconic” - once a reference to architecture’s use of signs and symbols to convey meaning - has flourished. However, in several eastern cultures figurative symbolism still forms the absolute cornerstone of architecture and civilisation.

Few countries embrace this practice with as much passion as China. Here, it is buildings as well as pictures that tell a story. From the ancient curved temple roofs built to deflect evil spirits to Herzog & de Meuron’s celebrated “Bird’s Nest” stadium for the 2008 Beijing Olympics, buildings in China have for centuries been configured as metaphors for sacred cultural emblems and ritual. And on the banks of Lake Lihu in the Jiangsu province city of Wuxi, a futuristic new example of this age-old tradition has just been completed.

Wuxi Grand Theatre is a £100m, 78,000m2 performance venue whose vast, winged roof is shaped like a butterfly, the Chinese symbol for love. Butterfly Lovers is also a much-loved Chinese opera and was the first performance staged at the new venue when it opened in May.

However, despite its revered position in Chinese culture, the butterfly was not the only metaphor used to generate the theatre’s distinctive form. “I have always been fascinated by natural, organic structures,” explains Professor Pekka Salminen, founder of PES Architects, the Finnish practice behind the project, “especially the intricate beauty of their primary and secondary structures. I had picked up a leaf in my office garden and this, through subsequent sketches and model-making, became the inspiration for the design.”

As the theatre’s swooping, sculpted silhouette emerges through the mists of the lake that surrounds it, the power and poetry with which these dual metaphors are realised becomes clear. With its curving roof, overhanging eaves and sloping walls, the theatre assumes the chamfered, birdcage-like aspect of a traditional Chinese temple. Yet its giant dancing wings extend irrepressibly like an insect poised in flight. The spectacular peninsula setting completes a visual set-piece of scintillating drama. “It had to be dramatic,” insists Salminen. “We wanted the building to look like music.” 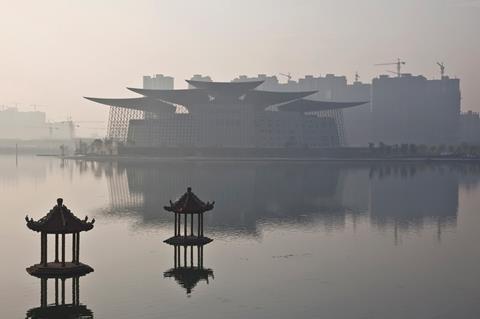 Like many Finnish architects, Salminen began his career as an engineer and his artistic ambitions here are achieved with a strict parametric precision, nowhere more so than on the roof. Eight sprawling wings, up to 50m high and 90m long, extend over two limestone-clad auditorium blocks like a radiating concertina. Both the blocks and wings are separated by a spine-like foyer bisecting the heart of the building, a skeletal expression of the primary and secondary structures that so intrigue Salminen. Five wings to one side cover the main 1,680-seat theatre, three wings to the other conceal a smaller 700-seat performance hall.

The wings begin vertically as diagrid steel funnels that sprout from a decked terrace before splaying horizontally above the auditoriums. They are formed by a giant tubular steel space frame truss which returns to the ground on the other side of the auditoriums via a cross-braced support wall, enclosing the building within like a metal cage. The wings then cantilever out to their full extent well beyond the building line.

I picked up a leaf in my office garden and this, through subsequent sketches and model-making, became the inspiration for the design

The organic theme at the heart of the design concept is further emphasised by the outer face of the wings being clad in diagonally laid Kalzip aluminium strips, which spread across the surface like a scaly, reptilian skin. A further 3m-wide perforated aluminium trim is applied to the edges of the wings, exposing the steel skeleton within; this is dramatically illuminated at night by thousands of embedded LEDs.

Each wing is also a different height, allowing it to slot above or underneath its neighbour like an oscillating shutter. The gap between the wings and the building below is occupied by a series of dynamic rooftop public terraces, each one framing dramatic letterbox views out to the lake and the city beyond. Salminen refers to the roof as the “fifth elevation” and its distinctive butterfly footprint can even be found on custom-designed door handles within the building.

Like all the world’s best opera houses and in a tradition that stems from the sumptuous foyers at Paris’ Palais Garnier, the drama begins well before the stage is even reached. The foyer is a series of lofty white, crystalline spaces, intricately crafted out of Corian, limestone and glass. Salminen says that “glass has been a key element of Finnish design since the fifties”, so it is fitting that it plays an enormous role throughout the public areas of the theatre. In the foyer, a forest of soaring circular columns, 75cm wide and up to 9m high, are covered in opaque glass sheets which are then dramatically illuminated by integrated LED lights at night. In a commendable gesture of visual continuity, these “light columns” are also used outside in the main entrance square and wistfully dotted along the edge of the lake.

A lakeside lobby also features a glistening glass wall comprised of 20,000 pieces of backlit glass blocks. Each block is etched with grooves to ape the ripples of the water outside. And from one of the gaping Corian oculi carved into the ceiling of an upper gallery drops a stunning glass staircase, hung like a chandelier by a ring of slender steel rods and meeting the floor below with the swerving, choreographed grace and delicacy of a ballerina’s pirouette.

The sophistication and intricacy of the detailing on these and other features throughout the interior reveal the engineer’s relish with which Salminen has clearly approached the project. Moreover, the imaginative use of glass and materiality pays homage to the intimacy and craftsmanship which is a hallmark of Finnish design. But there is one final space whose audacious use of materials reasserts Chinese as well as Finnish culture: the auditorium. 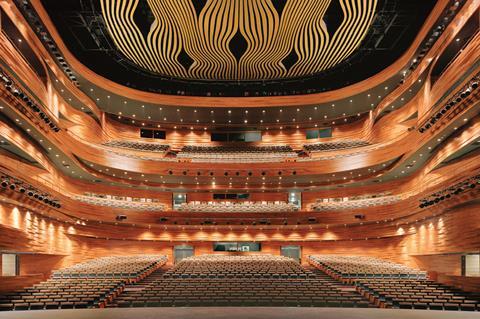 Like glass, wood plays a key role in Finnish design and is primarily responsible for the natural characteristics popularly associated with it. But bamboo is unequivocally Chinese. And it is 17,000 panels of 80mm-thick and 100mm-high bamboo that cover the walls of the spectacular auditorium at the heart of the theatre. These panels are up to 900mm long and are laid at staggered depths to form a curved, undulating surface optimised for acoustic performance.

The building represents a virile contemporary evocation of an ancient symbolic tradition, a spirited collusion between nature, art and engineering

Although bamboo is used extensively as a construction material in China (even for scaffolding) Salminen reveals that its use at Wuxi Grand Theatre is the “largest installation of its kind in the country”. Visually the bamboo is equally memorable. It swirls and surges along the walls like a series of rippling waves, constantly peeling away from its surface to encase the hall within a gushing, serrated crust that is a potent reminder of the earthy, naturalistic principles from which the building was forged.

The bamboo’s curvaceous form is complemented by that of the suspended ceiling above, a giant circular panel comprised of curving metal strips, all decadently gilded in gold leaf. Curved openings are formed within the strips in the manner of a Chinese opera mask. Bamboo is also present n the decked terraces that surround the theatre and adjoin the lake. Like the circular glass columns its use externally, as well as internally, enforces a sense of visual and conceptual continuity throughout the entire project.

It is impossible not to return to the symbolism from which the design concept of the Wuxi Grand Theatre grew when trying to summarise its significance. For the building itself can be read as a convenient metaphor too. It represents a virile contemporary evocation of an ancient symbolic tradition. It signifies a spirited collusion between nature, art and engineering. But perhaps most intriguingly of all, in celebrating the two cultures that forged it - the glacial craftsmanship of Finnish design and the didactic symbolism of Chinese iconography - it embodies the ubiquitous advance of a smaller, globalised world. 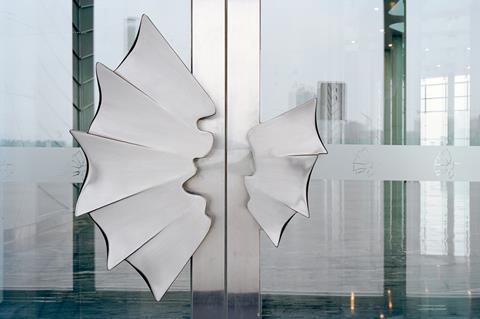 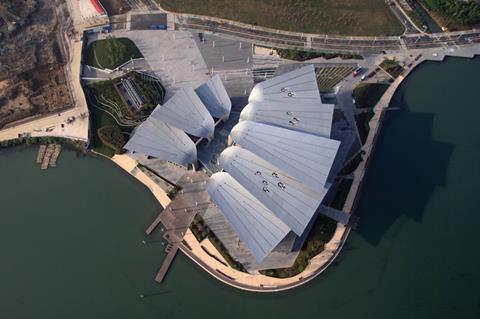