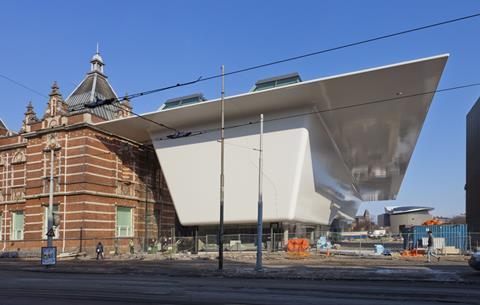 It is not only London that devises irreverent nicknames for its high-profile modern buildings; the practice appears to have caught on in Amsterdam too. The “Bathtub” is a new extension to the 117-year old Stedelijk Museum of Modern Art and occupies pride of place adjacent to the famous Van Gogh and Rijksmuseum in Amsterdam’s museum quarter. But as its unusual doppelganger implies, this is no ordinary museum.

The new Stedelijk extension is in fact the largest composite clad building in the world and the world’s largest synthetic structure. It incorporates a stupendous 100m-long plastic facade topped by an astonishingly precipitous 30m rooftop overhang that deflects up to 20cm in high winds. The building’s dramatically sloping walls, continuous rimmed roof and brilliant white enamel-like surface generated its “Bathtub” epithet.

Despite its international reputation for experimental flamboyance, in Holland itself Dutch architecture is renowned for its modesty and pragmatism. The architecture of Amsterdam city-centre is primarily historic with few albeit notable examples of radical modern intervention. Stedelijk breaks both precedents in a manner which museum spokesperson Marie-Jose Raven proudly describes as “bold, showy and un-Dutch.”

The building’s ground-breaking composite facade is a significant technical achievement. It is an achievement however grounded in two inherently practical concerns: accommodation and, ironically, conservation. The core intention of the project was two-fold. Raven describes the museum’s desire to “double its size” as a key requirement of the extension’s brief. With the new wing providing an additional 10,000m2 of space, all of which offers full climatic control for the first time, this requirement has now been robustly satisfied.

As project architect and Bentham Crouwel Architects (BCA) partner Joost Voss also explains, the second and more important requirement from a design perspective was to provide a “seamless” facade. “In order to respect the original 1895 building, the new building had to be completely different. The style of the original building is one of very intricate and elaborate decoration. So we tried to create the complete opposite by proposing a large, smooth single volume with a seamless surface without any joints.”

This focus on contrast rather than harmony is certainly a radical approach to the perennial question of how to integrate new buildings with old.

Intriguingly, it is also one that is diametrically opposed to the approach taken at a comparable UK museum extension that opened last year. At London’s National Maritime Museum extension the new wing maintains a passive visual deference that allows it to virtually dissolve into its historic neighbours. At Stedelijk, the only contextual concession of this kind is the height of the new building exactly matching that of the old.

Aesthetics aside, the next challenge was how to conceive a 100m x 25m “seamless” facade in a practical and economic way. The seamless facade also presented a major potential environmental problem: thermal expansion.

The junctions between conventional modular construction panels would have enabled the building envelope to expand and contract in line with the rise and fall of external temperatures. In Amsterdam, these range roughly from -20°C to 35°C. However, for aesthetic reasons, a seamless facade could not credibly incorporate joints of this kind. Therefore a material with negligible thermal expansion properties had to be found.

After rejecting glass and aluminium because of their thermal properties, a unique composite solution was eventually devised. But even this presented challenges. A composite solution had never previously been employed on a building of this size. And the reinforcing fibreglass often used in composite construction materials retained thermal expansion qualities that were too high. Therefore specialist fibre manufacturer Teijin developed a pioneering composite arrangement that incorporated a finely balanced mix of fibres and resin optimised to produce minimal thermal expansion. 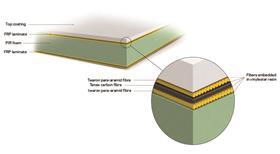 The facade is essentially formed by a sandwich structure that incorporates a layer of Tenax carbon fibre placed between two layers of reinforcing Twaron aramid fibre. All three laminate layers are embedded with vinylester resin. The natural thermal expansion properties of resin are counteracted by the negative thermal expansion coefficient of the fibres. The arrangement is repeated on either side of the external wall with PIR foam insulation between the two leaves of fibre laminates and plastering and paintwork applied to the inner and outer surfaces.

The result is a composite facade that despite being “seamless” enjoys thermal expansion properties that are 2.5 times lower than aluminium or glass fibre composites. It is also estimated that the new 3,000m2 Stedelijk facade will only expand by 1mm for every centigrade increase in temperature.

Teijin representative Dr Danny Wilms Floet describes the unique fibre properties of the facade as the perfect technical solution to realise the architects’ aesthetic ambitions of a smooth, un-jointed facade. “Aramid fibre is incredibly rigid and six times stronger than steel. It is also used for protection against loads and impact in a wide number of everyday applications.

These include cycle helmets, bullet proof vests, digital optical wires, tyres, brake pads, yacht hulls and offshore oil rigs. It also has a high-resistance against wear and tear and is easily repairable when damaged. But the Stedelijk is the first time it has ever been used on a building facade.”

So pioneering was its application that Teijin even contributed to the Stedelijk extension budget and became a project sponsor. Its use at the museum was also incorporated into their research and development programme.

Despite being “seamless”, the composite facade is of course constructed from several individual panels. A total of 185 were installed, all of which varied in size and configuration with the largest measuring a whopping 15m x 3.5m. After extensive wind and quality testing on prototypes, the panels were constructed on a series of vast factory tables (each one larger than the biggest panel) to ensure that they were perfectly flat. Floet describes this as the biggest challenge of the production process: “Composites can be moulded into any shape so curves are not a problem. But the eye can pick up even the slightest deviation on a flat surface so the tables helped ensure that the panels were as flat as possible.”

The panels were produced by a standard composite construction system known as “vacuum injection moulding.” The insulation and fibre layers are progressively stacked into a sandwich before being wrapped in film to create an airtight vacuum. They are then attached by tubes to vats of vinylester resin which, when the valves are opened, allows external air pressure to force the resin into the “sandwich” eventually creating a single, hardened, moulded unit. 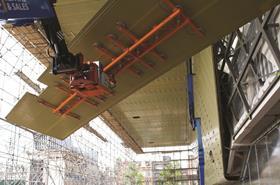 The prefabricated panels were then transported by a convoy of trucks to the construction site for installation. Specially configured forklifts hung them onto a steel fixing frame that had been wrapped around the new wing. Up to 15 hooks were applied to the inner face of each panel which were then fixed to almost 1,800 mounting points located across the steel frame.
In order to achieve the super-flat facade, laser mapping was used to identify mounting points that had been positioned beyond the 3mm tolerance zone stipulated. Thin plastic caps were then applied to the offending mounting points which shifted them infinitesimally forward or backward. This ensured the sub-millimetre accuracy required to perfectly align the panels and deliver the crucial super-flat facade.

Each panel was laid on the steel frame with a 50mm gap between the outer laminate skins, exposing the PIR insulation foam running continuously underneath. A strip of aramid fibre reinforced laminate was then glued into the gaps. This ultimately bonded all 185 panels into one gigantic composite unit with no visible joints. The fibre reinforced bonding strips ensured that the negligible thermal expansion properties were maintained across the full extent of facade.

Tellingly Holland Composites, the manufacturer that produced the panels, were initially established as yacht builders. With its smooth white surface and sharp aqua-dynamic lines the visual similarities between the Stedelijk and the hull of a boat are obvious. The nautical comparison does not stop there - the final task of painting the facade was completed by specialist yacht painters employing the same synchronised continuous spray method used when painting large boats.

Despite initial appearances, even the glossy white paintwork pays conceptual homage to the historic building behind it, albeit in a contemporary way. In the late thirties, the Stedelijk was the world’s first major art gallery to paint its interiors entirely white, initiating a practice that is now de rigueur at art institutions across the world today.

The start of something

Floet maintains that the Stedelijk’s revolutionary cladding has provided “a valuable new perspective from which to assess the huge potential of composite fibres as a construction material.” While composite construction has been employed elsewhere, it is the size and unique nature of the Stedelijk project that sets a precedent. Furthermore, Floet is keen to point out that it was the “intrinsic properties of fibre that made it the natural cladding solution for the project.”

Voos thinks the use of composite construction at the Stedelijk holds interesting parallels with other forms of manufacture and could set a new course for the way in which buildings and materials are produced: “If you look at the other consumer products on which carbon fibres are used, such as racing cars and helmets, there is a huge amount of standardisation and repetition. Buildings are normally the opposite, they are highly customised, one-off products. However, Stedelijk’s unique character proves that you can combine the two.”

But Voos’s most ambitious comments, and arguably the Stedelijk’s most powerful technological legacy, concern what composite materials could do in the future. “The one area of construction where they haven’t been extensively explored yet is on actual building structure. Applying composite materials structurally, now that’s the real next step.” 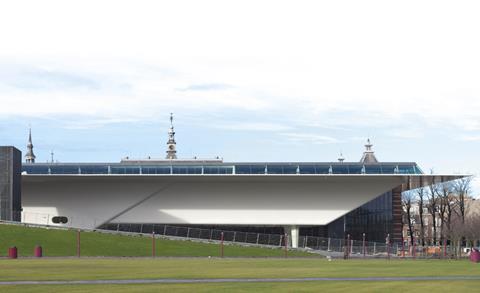