You can have a say in how CRASH is run

As a long-standing patron of CRASH, the managing director at British Gypsum Mike Chaldecott believes he’s found an efficient form of charitable giving for his company 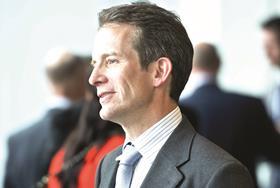 That’s different about supporting CRASH as opposed to other charities? This is a question that Mike Chaldecott, managing director at British Gypsum, is well qualified to answer - his company has been a CRASH patron for about 15 years.

“With CRASH you can offer a more serious committment,” says Mike. “It’s lovely to do charity work for cancer charities, of course, but with CRASH you can get people throughout the company really involved. They can get in and close,”

To illustrate the point Mike highlights the example of two British Gypsum employees who co-ordinate the supply of discounted materials to sites CRASH is supporting all over the UK. “It’s a challenge, these projects need materials yesterday. These ladies on our team are able to operate efficiently and make sure everything is delivered on time. They really drive it, they go above and beyond.”

Other staff from all departments in British Gypsum have got involved in fundraising. Last year the company took on the challenge of raising £100,000 in 100 days by participating in a variety of events. The money raised was split between CRASH and Macmillan Cancer Support. Mike says it proved a great team building exercise, where members of staff revealed their many talents. 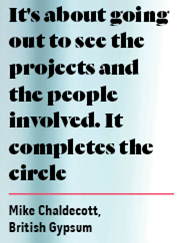 And on a personal level Mike enjoys actually seeing the results of his colleagues’ efforts: “It’s not just about donating money or materials, it’s also about going out to see the projects and the people involved - places like the centre near Victoria Coach Station or The Crypt in Leeds. It completes a circle.”

Mike clearly feels a sense of being a part of the charity and has become involved in its governance by joining the board. He points out that for business people this can be really satisfying: “You can have a real say in how it’s going. Patrons can be on the charity’s board, where you are able to guide it, make sure the funding is used well, makes sure it is being ambitious but at the same time not taking on too much.”

One thing he is keen to point out is that construction companies don’t have to be as big as British Gypsum to be a patron. “Not everyone can perhaps donate huge sums of money but companies can help in different ways. By lending the services of your architects or QSs or supplying plasterboard or boilers you can really make a difference. And see the people who benefit.”