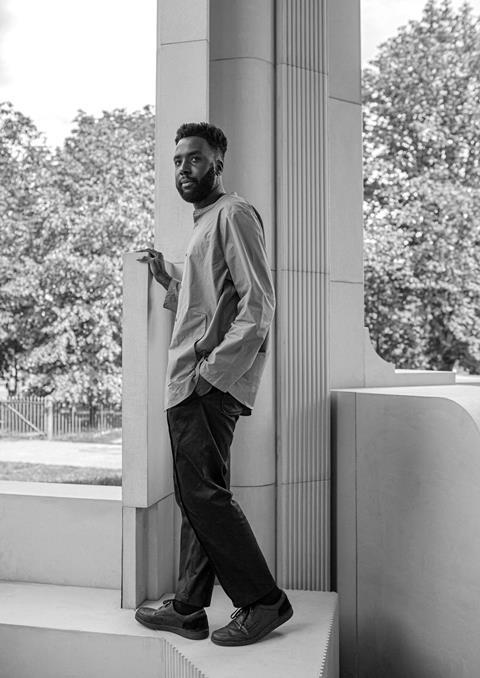 Chris Laing at the Serpentine Pavilion designed by Counterspace’s Sumayya Vally, whose transparency he considers a good example of architecture that works well for deaf people

Imagine embarking on an architecture degree where there are no agreed words for concepts as fundamental as cantilever, section or plan. It sounds impossible, but that is the task facing any young deaf sign language user who wants to become an architect.

There are simply no commonly accepted signs for most of the terms that architects and other construction professionals rely on. When a deaf person wishes to study, work or just express an interest in the built environment, they and their interpreter have to make up their own signs as they go along.

This laborious ad hoc approach also means that, if they encounter another deaf professional, they cannot easily understand each other when they talk about the masterplan, boundary or ventilation unless they spell out each word, letter by letter.

When the barriers are this great, it is hardly surprising there are so few deaf architects (or other consultants and contractors) in the UK, or indeed anywhere. Chris Laing, a 29-year-old architectural assistant at Haworth Tompkins, knows of only three fully qualified deaf architects in the UK, and he has one other deaf friend in the profession, Adolfs Kristapsons from Pilbrow & Partners, who is also a part II architectural assistant. The pair studied separately – Laing at Kingston University and the Royal College of Art (RCA), Kristapsons at Central St Martins – and were introduced by an interpreter.

Together they are determined to break the cycle of repeatedly making new signs, and have begun a project called Signstrokes to create a British Sign Language (BSL) lexicon for the built environment.

With Dr Kate Rowley from the UCL Deafness Cognition and Language Research Centre, Laing and Kristapsons held a workshop to brainstorm ideas for 120 terms they had identified as essential for architecture, planning and construction. Over the course of three hours a group of lay deaf people and interpreters agreed signs for thirty of the terms.

These are now being uploaded as gifs to the @Signstrokes Instagram account. Laing and Kristapsons will create the final 90 signs using what they have learnt about the process of forming language. The point of having lay people – aside from the scarcity of deaf architects – was to ensure the signs were easy for anyone to understand.

“It’s not a simple process to create signs,” explains Laing , talking to Building through an interpreter via Zoom. “You have to consider hand shape and movement as well as signing space.”

As our interpreter explains when Laing’s screen freezes yet again, BSL is a 3D language. Using video is more frustrating than one might imagine.

Laing gives the word “gentrification” as an example. At the workshop, they talked about its meaning and began with two signs: a finger curling under the nose for “posh” and two hands moving forward to indicate “taking over”. Finding a way to join the movements smoothly was tricky, but eventually they turned two phrases, “posh people” and “taking over”, into a single word.

Rowley taught Laing and Kristapsons about creating families of related terms based on the same basic hand shape, something they did for “elevation”, “section” and “envelope”, for instance. If they can establish a set of root linguistic forms with logical rules, the hope is that the lexicon will evolve alongside the profession.

Laing demonstrates another word, “cantilever”. It looks like what it is, with one hand pivoting over the other at the wrist – the visual equivalent of onomatopoeia. But visually determinant signs are not always helpful. For example, the sign for “roof” mimics a traditional pitched roof – misleading if you are designing a flat-roofed building or engaging in stylistic debate.

Sadly, Signstrokes cannot be rolled out in other countries. There are as many as 300 different sign languages around the world and, while social media tools like Instagram are leading to some standardisation and borrowing – the sign for bamboo is taken from Chinese Sign Language and the sign for Notre-Dame from French – that can only go so far. For instance, American Sign Language (ASL) is so completely different from BSL that in ASL the alphabet is signed with one hand whereas BSL uses both.

Laing gives the word ‘gentrification’ as an example. they began with a finger curling under the nose for ‘posh’ and two hands moving forward to indicate ‘taking over’

Laing, who was born deaf, grew up using BSL which his hearing family – his midwife mother and two younger brothers in Mitcham, south London – learnt too. He describes it as his first language and explains that reading long chunks of written text in English – his second language – is hard work.

There are 151,000 BSL users in the UK, a fraction of the country’s 11 million deaf and hard-of-hearing people but still a considerable number. Almost half say BSL is their favoured language. In a kind of deaf uprising between 2000 and 2003, street protests forced the government to recognise BSL as a language in its own right.

Since that high point, things have regressed, with funding cut for deaf schools and clubs. The community continues to campaign for more rights and support. In Laing’s masters thesis – which proposed a BSL pavilion on the South Bank and was shortlisted for the RCA’s spatial justice prize – he describes deaf people as suffering systemic discrimination in the workplace, education and wider society.

Other obstacles to engagement

It can be quite lonely. “There are less resources and fewer points where you can engage with colleagues and peers in practice,” says Laing, who counts himself lucky to have met Kristapsons.

The events and exhibitions that form the cultural and educational lifeblood of architecture rarely come with BSL interpretation, so deaf people have to book their own. The same goes for public consultations, because even written descriptions accompanying exhibits ideally need signed interpretation.

“And take the internships that lots of people apply for,” says Laing. “It’s a straightforward process for my hearing peers because they can just attend an interview, whereas I have to factor in the need for an interpreter.” He can apply to a government fund called Access to Work to pay for this, but confirmation can take eight weeks – by which time the place has usually been taken by someone else.

His experience at Haworth Tompkins, where he is working on residential projects such as Fish Island Village in Hackney, north-east London, has been positive, with many colleagues trying to learn basic signing after Laing led some workshops. “I usually have an interpreter with me but if there’s none present we use visual prompts, notes and gestures,” he explains.

Laing has wanted to be an architect since he was eight – he thinks his focus on the visual sparked a fascination with how spaces work – but did not come across a deaf architect until he was at secondary school. That encounter inspired him – but not enough to take the plunge. “They were white and had white privilege, which I didn’t have as a black young person,” he recalls. “I thought there can’t be black deaf architects out there. You need to be able to see a route.”

Despite being a BSL user, he went to a school that focused on “oralism” – speech and lipreading rather than signing – which made studying subjects such as maths and physics particularly tricky. Instead he found himself drawn to art, photography and IT as A-level subjects, which led him to an interior architecture course at the University for the Creative Arts in Canterbury.

It was only after graduating that he met a black deaf architect for the first time, an encounter that reignited his longing to become an architect and propelled him to apply for his part I at Kingston despite the huge linguistic challenges.

He and Kristapsons are trying to improve things for the next generation. Alongside Signstrokes, Laing is setting up the Deaf Architecture Front (DAF), a networking and activist group.

He wants to see a new role of deaf architectural consultant to ensure deaf people’s needs are taken into account from the start of a project. “The current inclusive design guidelines are not fit for purpose,” he says. “They are focused on hearing loops and there’s very little understanding of people who use sign language.”

DAF will also advocate for DeafSpace, an inclusive design concept that originated in the US about 15 years ago. Laing hopes allies in the profession will begin to make it standard practice to design open-plan spaces with 360º views – so that deaf people can immediately see where everything is – as well as curved walls so you can see what or who is round the corner.

Specifying wooden rather than concrete floors allows you to feel through vibration if something is happening behind you, while mirrors can serve a similar purpose. Glass doors, even if they are partly opaque for privacy, allow you to see if someone is knocking. And arranging meeting spaces and lounges in the round so that everyone can see the person signing or speaking is another essential design feature for deaf people.

The current inclusive design guidelines are not fit for purpose. They are focused on hearing loops and there’s very little understanding of people who use sign language

“One of my favourite buildings is the Mac in Belfast because everything in regard to access has been considered,” says Laing. “It was designed by Hackett Hall McKnight with Richard Dougherty on the team. He is deaf and understands the importance of materials, configurations and textures. It’s not just about how something looks but how it feels. Texture guides the eye, and varying textures means that spaces visually communicate different modes.”

After his graduation at the Royal Albert Hall this summer, Laing celebrated with a visit to the Serpentine Pavilion (where he is pictured here), designed by Sumayya Vally of Counterspace, whose transparency he felt was an example of good DeafSpace practice.

As his career progresses, Laing hopes to design cultural and public buildings himself, as well as hospitals and housing – all typologies that often fail the DeafSpace test. Alongside that, he hopes to teach, consult and campaign. It is a tall order, but the Signstrokes project is an important first step on the ambitious path he has set for himself.