The construction sector is still thriving but according to economic indicators there was a fall in activity in services and manufacturing. Decline in some sectors has led to questions on the strength of the economic recovery. Michael Dall discusses the highlights of Barbour ABI’s monthly Economics & Construction Market Review

The macroeconomic signals have been mixed over the past month with the purchasing managers’ index (PMI) indicators for services and manufacturing falling in May, but construction increasing.

The PMI indicators are still above 50, the level that indicates expansion in the sector, but the decline in particular sectors has led some to question the durability of economic growth.

While debate remains about the momentum within the economy more widely, the level of inflation fell into negative territory, prompting many to comment on the potential impacts of deflation.

The level of inflation was -0.1% in May and this was largely attributable to continued falls in year-on-year oil and food prices. However, even once these volatile elements are stripped out, the level of “core CPI” has also been falling in recent months and at 0.8% is at the lowest level since March 2001.

The level of business investment is starting to increase, according to the Office for National Statistics (ONS), which is encouraging given the recent tendency of economic growth to be focused on consumer spending. However, this investment has been concentrated on intellectual property and transport equipment while investment in property continues to decline.

The latest figures from the ONS show that the construction sector in the UK shrank by 0.8% between March and April 2015.

It is clear that the housing sector is the main component of growth within the industry. New private housing increased by 4.5% between March and April 2015 and 16.6% from the corresponding month in 2014. At the same time, new public housing increased by 9.4% and 3.6% respectively. Output in the private commercial sector fell by 0.2% between March and April, and by 5.2% in April 2014.

Infrastructure decreased by 2.2% but is 9.7% higher than April 2014. This highlights that the growth patterns within the industry are broadly reliant on housing, although the yearly increase in infrastructure output is encouraging.

The ONS/Barbour ABI New Orders for Q1 2015 showed that total order levels increased by 0.4% between Q4 2014 and Q1 2015 and were 8% higher than a year ago. Yearly growth was recorded in the private housing sector, infrastructure, industrial and commercial sectors indicating a broadening growth in new orders.

The CPA/Barbour ABI Index which measures the level of contracts a warded using January 2010 as its base month recorded a reading of 138 for May (see CPA/Barbour ABI index, right). This shows no change from the previous month and continues to support the view that overall activity in the industry remains strong. The readings for private housing increased in the month, after falling over recent months. However, commercial offices decreased to a reading of 115, down from 129 in April.

According to Barbour ABI data on all contract activity, May witnessed an increase in construction activity levels with the value of new contracts awarded £5.6bn, based on a three-month rolling average. This is a 1.4% increase from April and a 7% increase on the value recorded in May 2014. The number of construction projects within the UK in May decreased by 9.3% on April, and were 14.9% lower than May 2014.

The majority of the contracts awarded in May by value were in the South-east, accounting for 34% of the UK total. This is followed by the North-west with 13% of contract value awarded and London with 12% of value (see locations of contracts awarded). The strong performance from the South-east is primarily due to the award of the £1.3bn contract to construct the Rampion Offshore wind farm off the Sussex coastline.

Another renewable energy project in Cumbria, the Dong Walney offshore windfarm extension, was a major contributor in the large proportion of the contract value in the North-west in May. This was valued at £330m and is set to provide 330MW of electricity output, with the capacity of the entire scheme 750 MW. The largest individual project in London in May was the mixed-use Leicester Square project, which is to redevelop the Odeon site providing a hotel, cinema and residential units. The value of this project is £150m.

Infrastructure had the highest proportion of contracts awarded by value in May with 41% of the total value of projects awarded. The two major offshore renewable contracts contributed to the sector showing presence in May. Residential had a strong month in May, accounting for 21% of the value awarded. The largest contract awarded was a 291-unit residential development on Blackpool Road in Preston valued at £29m. 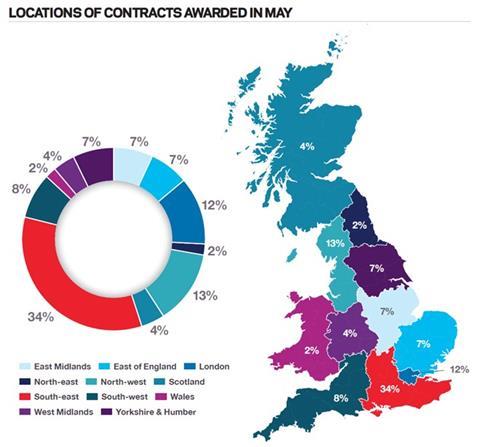 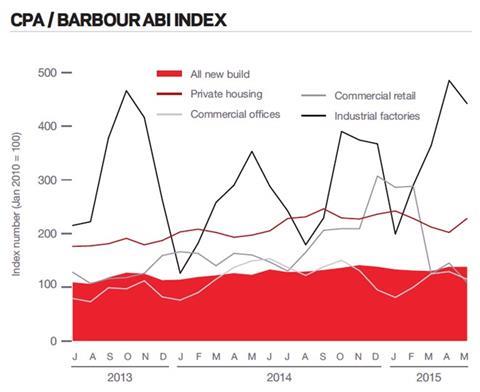 The uncertainty surrounding the general election outcome led to a monthly decline in both residential units and values but growth is still evident over the longer term.

Activity in the residential sector decreased in May with the total number of units awarded 12,060, based on a three-month rolling average. This is an 11.4% decrease compared with April but is 10.2% higher than May 2014, indicating that the residential sector is still performing strongly over the longer term.

The value of projects associated with residential contracts awarded increased by 0.3% between April and May based on a three-month rolling average, but is 6.9% lower than May 2014. Taken together these statistics suggest a slowdown in recent months after strong performance recently.

Yorkshire & Humber is the main hub of activity in the residential sector this month, accounting for 15.7% of the value of contracts awarded, an increase of 10.3% from May last year (see Value of contracts and Type of projects awarded, right). The South-east had the next highest share with 13.3% of the total value, an increase of 1.4% from May 2014. 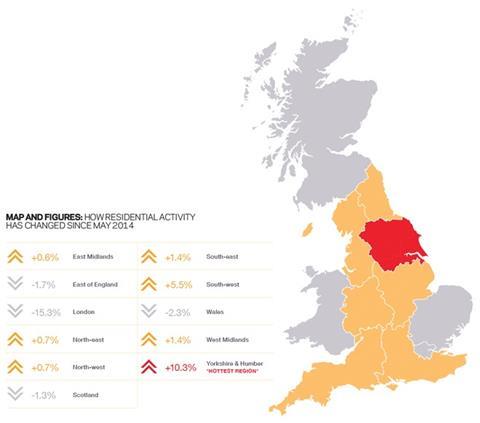 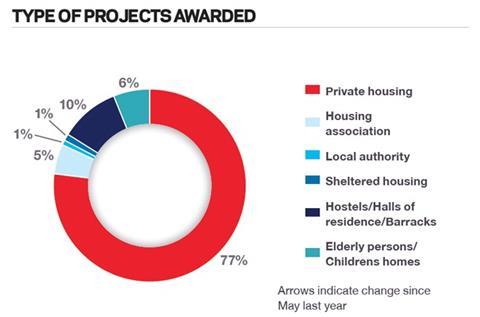 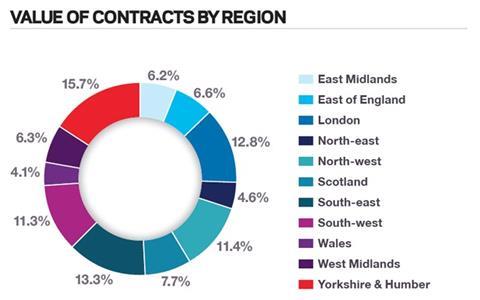