The next release of GDP figures should see the UK pass pre-recession levels of output and the closely watched Markit/CIPS PMI indicators continue to be consistently above 50, the number which marks growth in activity.

Labour productivity levels within the UK continue to puzzle economists as they are still significantly below the levels of 2008 with no obvious reasons proffered for this. Latest data shows that output per worker is 3.8% lower than the start of 2008 despite output being almost back to 2008 levels.

This month, there was positive news on the levels of business investment in the economy with the ONS reporting that in the first three months of the year it was 10.6% higher than the same period in 2013. Other news of note this month on the UK economy includes:

The issue of house prices continue to dominate the economic debate with the Bank of England introducing the Financial Policy Committee’s measures designed to ensure there is no repeat of excess lending experienced in the past. This, alongside a continuing export gap and the productivity puzzle, remain key challenges for the UK economy. It is Barbour ABI’s view that the near term outlook for the UK economy is good but that addressing these fundamental issues will be vital in ensuring sustainable economic growth.

Comparing output levels with May last year showed an increase of 3.5%. It is further evidence of the improving performance of the sector in the long term and its impact on wider economic growth.

It is clear that the housing sector is the main component of growth within the industry. The private housing growth was flat between April and May 2014 but was 16.8% higher than the corresponding month in 2013 (see Contracting Activity by Sector, below). At the same time public housing was 5.2% higher in May from April and was 29.3% higher than last year.

Output in the private commercial sector fell by 3.6% between April and May, and is 2.9% lower than May 2013. Infrastructure was flat month-on-month but was 7.1% lower than May 2013. This highlights growth patterns within the industry are reliant on housing and wider improvements are needed to ensure a robust recovery.

The CPA/Barbour ABI index which measures the level of contracts awarded using January 2010 as its base month recorded a reading of 133 for June, as shown in the Business Barometer section this week (also see graph below). This is an increase from the previous month and supports the view that overall activity in the industry is strong. The readings for private housing remained strong. The reading for commercial offices continued its recent rise with a figure of 153 this month and commercial retail reported a figure of 147.

According to Barbour ABI data on all contract activity, June witnessed a slight decrease in construction levels with the value of new contracts awarded at £5.2bn, based on a three month rolling average. This is a marginal 0.7% decrease from May though it is a 10.5% increase on the value recorded in June 2013, an indication of a stronger summer for construction this year. The number of construction projects within the UK in June increased 11% on May, and is 34.9% higher than June 2013.

The majority of the contracts awarded in June by value were in London, which accounted for 17% of the UK total (see map alongside chart below). The main reason for this was the £100m redevelopment of the International Broadcast Centre at the Olympic park which was awarded this month and the £70m contract for a residential development at North Wharf Gardens in Paddington Basin.

The South-east, Scotland and the North-west each had 13% of the value of contracts awarded in June. In the South-east the major project this month was the student accommodation development at Brighton & Hove College valued at £73.4m. In Scotland the largest project was the Macallan Distillery Redevelopment in Grampian which was valued at £100m. In the North-west, the largest project was the award of the Smart Motorway project on the M60/62 which was valued at £184m.

Residential had the highest proportion of contracts awarded by value in June with 30% of the total. This demonstrates the continuing strength of the residential sector within the industry. Infrastructure (24%) and commercial and retail and education (both 13%) were the next highest sectors this month by value of contracts awarded. 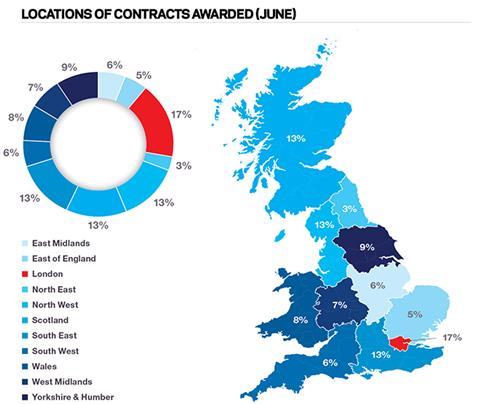 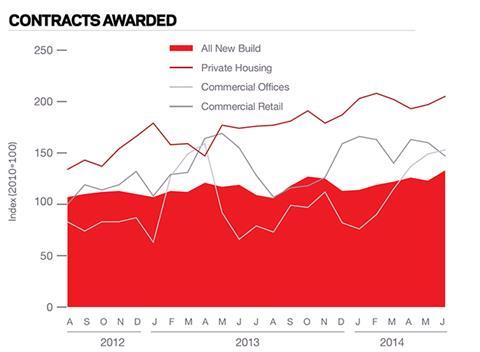 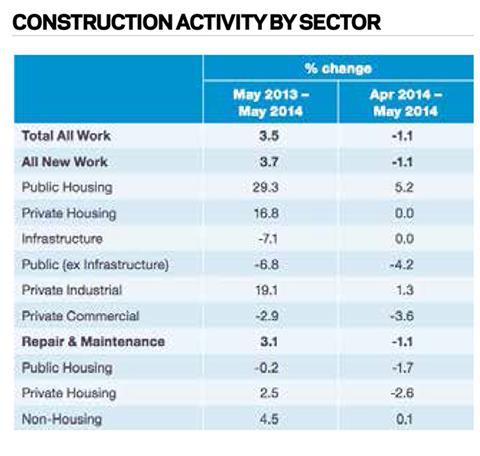 Contracts awarded in the residential sector totalled £1.67bn, based on a three month rolling average (see bar graph below). This is a 7.6% decrease compared with May and is 0.6% lower than June 2013, indicating that after significant growth since the start of 2013, this pattern of growth is slowing. The number of units associated with residential contracts awarded decreased by 7.6% between May and June, based on a three month rolling average, but were 5.4% higher than June 2013, confirming the longer term increase in residential units in the sector.

London is the main location of activity in the residential sector this month, accounting for 21% of the value of contracts awarded, although this was a decrease of 1.9% from the same month last year (see below). London’s prominence was primarily due to the award for North Wharf Gardens at Paddington Basin valued at £70m and the £65m Cartwright Gardens student accommodation development at the University of London. The South-east and the North-west were the next most popular locations for residential contracts this month accounting for 17.9% and 15.1% of contracts awarded respectively.

The types of projects awarded in the residential sector were dominated by private housing and hostels/halls of residence (see opposite, top right). Private housing accounted for 44% this month, down 39% from the corresponding month last year. This is primarily due to the large value of hostels/halls of residence this month which accounted for 42% of the contract value, an increase of 39% on June 2013. 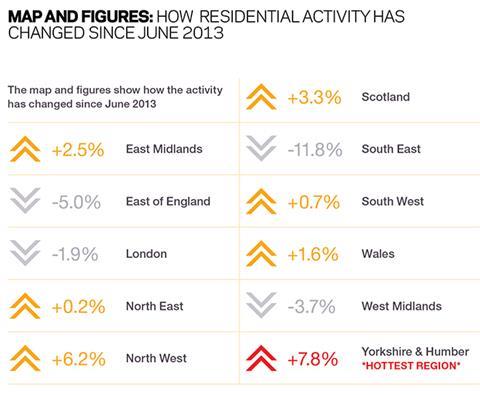 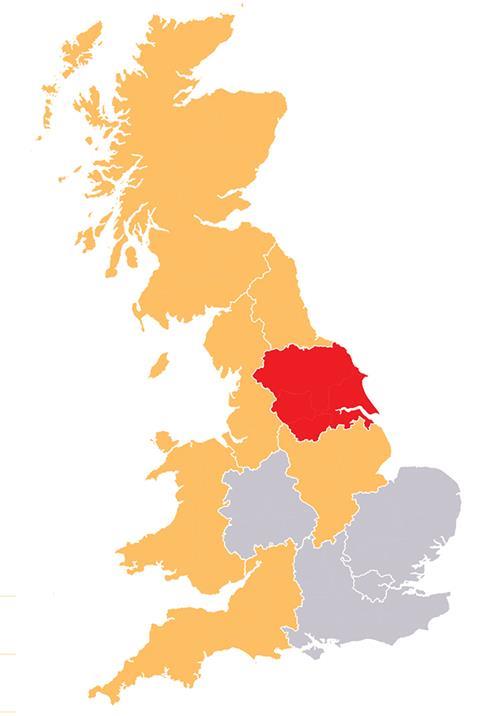 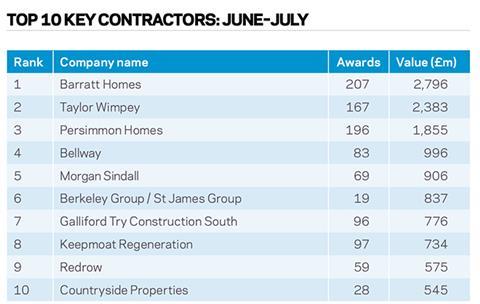 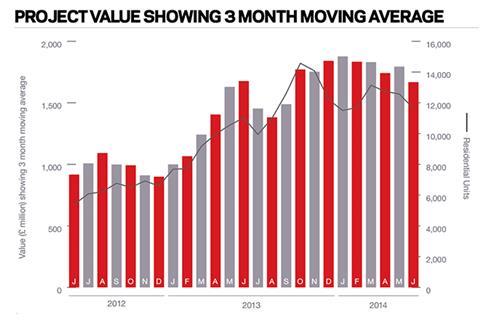