Green Deal: One year on

The Green Deal is one year old this week but the celebrations are, to put it mildly, subdued. We look back on a year of disappointments for the energy efficiency retrofit market 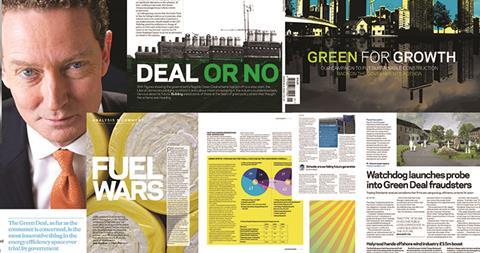 The Green Deal launched - with much fanfare - a year ago this week. As energy minister Greg Barker wrote in Building in March 2012, this was a scheme that was going to create “a new market [that] will drive the transformation of our housing stock over the next two decades, unlock innovation, bring new entrants in to the sector and unleash much greater competition”.

Barker had hoped the introduction of the Green Deal, with its innovative payment mechanism under which the loan for energy efficiency measures is paid back through a customer’s energy bill, would fundamentally alter the way the energy efficiency retrofit market worked. This was not just “another government initiative” he said, predicting thousands of jobs created and 10,000 “Green Deals” signed by the end of 2013.

But a year on very few people have signed up to Green Deal finance. There were just 1,119 Green Deal plans signed last year, a little more than a tenth of Barker’s prediction, forcing the minister to admit last week his prediction had been “spectacularly wrong”.

In his defence the minister points to Department of Energy and Climate Change (DECC) research that indicates that of the thousands of Green Deal assessments that have been completed - 129,842 to be precise - 81% do result in people undertaking or planning energy retrofit work. His case is that while the use of Green Deal finance has been low, the introduction of the system has, through requiring property assessments, spurred on a huge amount of work that otherwise would never have been undertaken. So is that really true? And even if it is, is that level of work enough to meet the government’s carbon reduction goals and support the embattled retrofit industry?

The failure of Green Deal finance to take off has been well documented. Experts say consumers have been put off by the complexity of the system and the cost of finance itself, which is more expensive than secured borrowing against your home, an option available for many considering whether to take up the Green Deal.

Even if you accept that finance should not be the measure of success and measures installed should be, it’s falling short

The question of whether the Green Deal’s introduction has been the catalyst for work paid for privately is impossible to answer definitively, because the department does not collect data on non-government funded work. 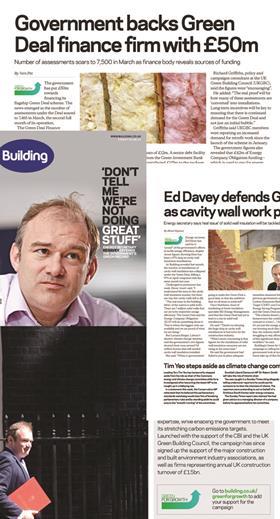 Nevertheless a closer look at the DECC research reveals that the thousands of Green Deal assessments may not really be stimulating the energy efficiency market in the way the government is implying. Of the 78% of customers undertaking Green Deal assessments who said they have already done, or were doing, work to their homes, 38% were funding it either through the government’s ECO scheme or with grants from a local authority. A variety of other grant regimes and incentives represent much of the other work. Vitally, only 24% were contributing any money to it at all. So, it seems that for the most part assessments are driving people to take up existing government subsidy schemes, meaning the Green Deal assessment process is helping people who would be helped anyway, not finding “new” customers for this work.

Certainly Green Deal firms have had mixed experience with turning assessments into work. Richard Griffiths, Parity Projects business development manager, is a supporter of the Green Deal and says assessments have been a “catalyst for serious retrofit work”. He says: “We have had people who come to us because they have had a Green Deal assessment and recognised that that has not given the detail they need, so have come to us to get a masterplan done for the house.”

When Building speaks to Andrew Mellor, director of environment at PRP Architects, he is visiting a homeowner of one of the practice’s research projects. His experience clearly supports the contention that the public are simply being driven into the arms of existing subsidy programmes by Green Deal assessments. “This very lady installed hot water cylinder installation and loft insulation after having a Green Deal assessment, but she got them for free,” he says.

He adds that the industry must take a share of the blame for the scheme’s shortcomings, with customers finding ways to fund improvements despite getting little help. “This lady was given very bad advice about where she could get funding … People don’t necessarily understand the finance side of it,” he adds.

In any event this use of other government subsidy schemes to bolster the Green Deal’s performance could be about to be curtailed - the government announced in December that it was cutting utilities’ targets under the ECO by 33%, and work through that scheme has dropped dramatically since then.

John Egan is a former chair of Enact, a firm that signed up early to be one of 22 Green Deal pioneers only to enter administration in June 2013. His experience is that the minister’s claim that 81%of people who undergo an assessment get some work done “sounds completely false”.

What’s more, he argues that being a Green Deal provider actually made Enact less competitive. He says Enact incurred “significant overheads” in becoming a provider, meaning smaller firms that were not part of the Green Deal system were often able to undercut him.

Damage to the market

Certainly the failure of Green Deal finance, which had major firms such as Carillion lined up behind it to undertake the work, has been a blow to national builders. Carillion, for example, is cutting around 1,000 jobs in part because of the slow start to the market. Rob Lambe, managing director at Willmott Dixon Energy Services, says he “doesn’t believe” that the minister’s assertions give a “true sense of what’s happening in the market”.

Lambe says much of the work going on in the » » market is for low-cost measures anyway, which was not why the Green Deal was set up.

“Green Deal finance doesn’t work when you are talking about a low cost measure; it works when you’re doing thousands of pounds worth of work. So, to talk about the number of people who have done something themselves is to distort the purpose of the Green Deal, which was to allow people to do higher cost work,” he says.

While the government hasn’t set a specific carbon reduction target for the Green Deal, retrofit has long been seen as a cost effective win in meeting the country’s overarching target of reducing emissions by 50% by 2050. But John Alker, director of policy at the UK Green Building Council, says that “by anybody’s standards” the Green Deal is not performing the role it should do. “Even if you accept that finance should not be the measure of success and measures installed should be, it’s falling short,” he says.

In the longer term I would be more hopeful, beyond 2015-16, when I believe the pressure around fuel poverty and carbon reduction will become increasingly importantGovernment ministers and officials are keen to emphasise that the Green Deal is a long-term programme, and say that to judge it by its short-term figures is unfair. A number of options to bolster the incentives to take up the finance are now under consideration following December’s Autumn Statement, with changes and tweaks due later this year [see below].

In the longer term I would be more hopeful, beyond 2015-16, when I believe the pressure around fuel poverty and carbon reduction will become increasingly important

Mellor says that if the Green Deal is to be saved, the finance options need to be more attractive - the interest rate on Green Deal finance is between 8% and 10% - and the communication to customers from firms needs to improve. “It is absolutely the industry [that needs to improve]; it’s a business opportunity,”
he says.

Lambe is more downbeat. He says that being “realistic” many of the firm’s programmes are likely to get scaled back. He adds: “We’ve got to accept that that return is not going to be there in the short term. In the longer term I would be more hopeful, beyond 2015-16, when I believe the pressures around fuel poverty and carbon reduction will become increasingly important.”
The Green Deal certainly seems to have a future, though the extent of reform under a Labour government remains unclear. But although there are now 125 Green Deal providers the first year of operation has seen firms quitting the sector and those that remain chasing small volumes of work. For the larger providers there may be other related market areas, such as domestic renewable energy, that they can turn their attention to. Smaller companies may end up in a similar situation to Enact.

But after so much was promised, the government’s decision to slash the ECO has left market confidence in the Green Deal at a low ebb. Next time ministers ask construction firms to invest in a new green market opportunity they may find a lot fewer willing participants.

How can the Green Deal be improved?

At the end of November last year the government announced it would introduce a stamp duty rebate of £1,000 for homebuyers installing energy efficiency measures under the Green Deal, adding that this could increase to as much as £4,000 for the installation of solid wall insulation. The Department of Energy and Climate Change said the scheme would be available to all people moving house including those who don’t pay stamp duty, helping around 60,000 homes a year, over three years. The government is set to publish a consultation on the plans next month, with the
changes set to come into effect in March.

Just last week energy minister Greg Barker said the government was considering relaxing the Green Deal’s golden rule, which states the cost of the measures and finance must not exceed the savings on the consumer’s energy bills. This was in response to feedback telling him many consumers were willing to accept a higher repayment to pay off the loan faster, even if that meant an increase in energy bills. In such a case, Barker said, home owners might have to accept that they would have to pay off the loan in full before moving house to prevent it being passed on to the subsequent occupants. So far, however, there has been no official statement from DECC on the issue.

In autumn last year Labour announced that if elected to government in 2015, it would replace the Green Deal with a similar Energy Saver scheme. Then earlier this month shadow energy minister Jonathan Reynolds told Building that Labour would seek ways to bring down interest rates on the new scheme, such as using the government’s balance sheet to underwrite loans made through the scheme.

At the end of November last year a DECC statement said that it was introducing a series of measures to simplify the Green Deal. These included opening up access to Energy Performance Certificate data, so that companies can more easily identify properties which will benefit most from energy efficiency improvements and adding more measures to the list of those that can be supported under the Green Deal. In addition, DECC said that it would work with the industry to find ways to reduce the cost of insurance requirements attached to Green Deal measures and change legislation to make it clearer that landlords and tenants can benefit from the Green Deal. DECC has said that some of the changes would happen this month, with others planned for the first half of 2014.