The residential sector continued to drive construction’s growth in May. Here are highlights from Barbour ABI’s latest monthly Economic & Construction Market Review, plus a focus on the commercial and retail sector

The detailed GDP results showed that all major components of the economy improved in Q1 this year compared with Q1 of 2013. However, it is only the service sector which is back above its pre-recession peak. Since Q1 2013 there have been increases in the GDP figures in services of 2.9%, in production of 2.5%, manufacturing of 3.5% and construction of 5.4%.
Unemployment fell again in the three months to April, and is now 6.6% compared with a peak of 8.4% in December 2011. The total number of people unemployed now stands at 2.16 million, down 161,000 on the previous quarter.

However, the level of government debt as a percentage of GDP is still significantly higher than pre-recession levels. Public sector net debt now stands at 75.6% of GDP in April 2014 whereas in January 2008 it was 35.7%.

This month, the National Institute of Economic & Social Research predicted that the UK has now exceeded pre-recession level of activity by 0.2% in May. The IMF also gave a much improved outlook for the UK economy during its annual inspection visit commenting that “good macroeconomic performance is expected to persist.” Other news of note this month on the UK economy includes:

The housing sector is the main component of growth within the industry. Private housing ouput increased by 2.5% between March and April 2014

The issue of house prices continues to dominate the economic debate with business secretary Vince Cable urging the Bank of England to intervene to ensure market stability. This, alongside a continuing export gap and comparatively low levels of business investment remain key challenges for the UK economy. It is Barbour ABI’s view that that near term outlook for the UK economy is good but that addressing these fundamental issues will be vital in ensuring sustainable economic growth.

Comparing construction output levels with April last year showed an increase of 4.6%. It is further evidence of the improving performance of the sector and its impact on wider economic growth.

It is clear that the housing sector is the main component of growth within the industry. Private housing ouput increased by 2.5% between March and April 2014 and 16.6% from the corresponding month in 2013.

At the same time public housing output, while down from March 2014, was 26.3% higher than last year. Output in the private commercial sector fell by 0.9% between March and April, though it is 1% higher than April 2013. Infrastructure increased by 0.6% month-on-month but was 7.6% lower than April 2013. This highlights that the growth patterns within the industry are reliant on housing and broader improvements are needed to ensure a robust recovery.

The ONS/Barbour ABI New Orders for Q1 2014 showed that total order levels declined by 6.3% between Q4 2013 and Q1 2014 but were 7.6% higher than a year ago (see new orders graph). The housing and industrial sectors both showed increases from last year but order levels in commercial and infrastructure were less than a year ago. This data, combined with the latest ONS construction output figures, provides further evidence of the focus on the residential sector in construction.

According to Barbour ABI data on all contract activity, May witnessed an increase in construction levels with the value of new contracts awarded £5.3bn, based on a three month rolling average (see contracts awarded graph). This is a 5.3% increase from April but a 3.7% decrease on the value recorded in May 2013, an indication that the recent levels of growth in construction contract values is slowing. The number of construction projects within the UK in May increased 0.6% on last month, and is 9.6% higher than May 2013.
The largest region for contract awards in May by value was London, which accounted for 24% of the UK total (see locations chart). The main reasons for this were the £300m of commercial development at Selfridges and the contract for residential development known as The Hyde on Edgware Road, which has a value of £200m. Scotland was the next most prominent region, accounting for 13% of the construction contracts awarded in May with major projects including a £50m waste recycling plant in Strathclyde and the £42m contract for Anderson High School in Shetland. 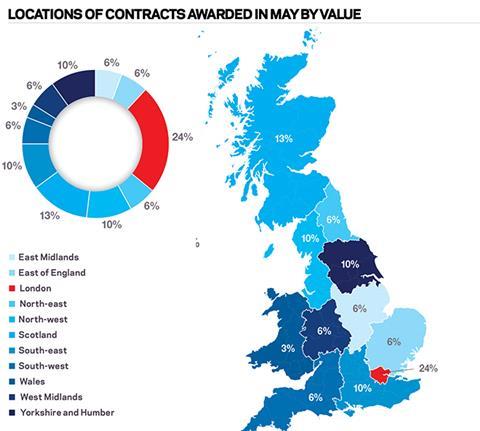 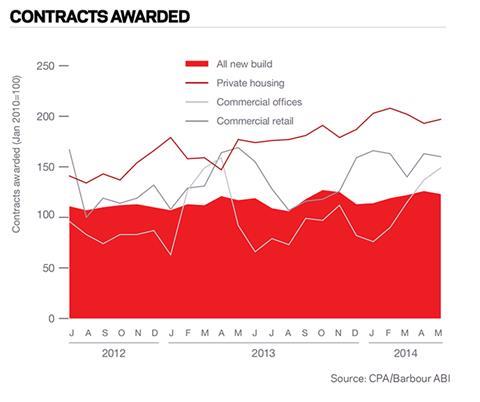 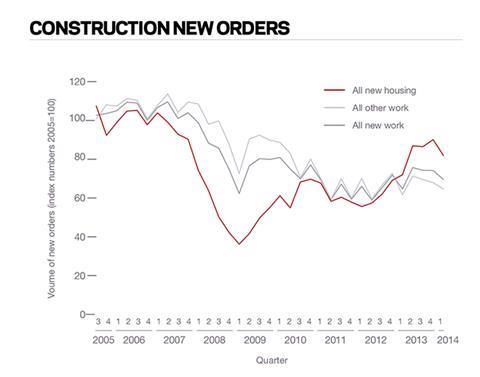 Spotlight on the commercial and retail sectors

The value of contracts awarded in the commercial and retail sector was £908m in May based on a three month rolling average. This is an 18.9% increase from April but a 10.1% decrease from the May 2013 figure. In the three months to May the value of contracts was 27% above the previous three months but 7.1% lower than the same period in 2013. The fact that there has been a monthly and quarterly increase in the value of commercial projects awarded is encouraging but the decreases on last year’s contract award values highlight some concerns over longer-term performance.

London was the main location of activity in the sector this month with 53.5% of the value of all contracts awarded, although this was 15.3% lower than May 2013 (see chart below). This is largely attributable to the Selfridges redevelopment project which aims to revamp the flagship Oxford Street store in London at a value of £300m. Another major London contract this month was the BSkyB campus Phase 2 at its headquarters in Isleworth which has a value of £62m. Yorkshire & the Humber was the next most significant location of activity accounting for 23.1% of contract value and this was primarily due to the award of the contract for Central Square development in Leeds worth £200m. 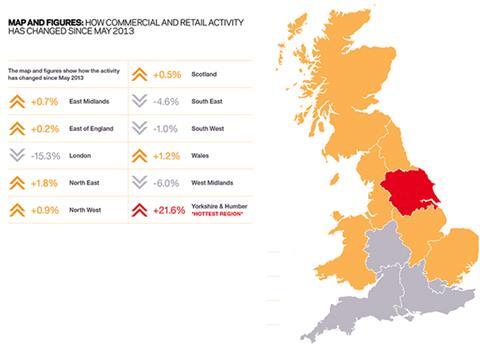 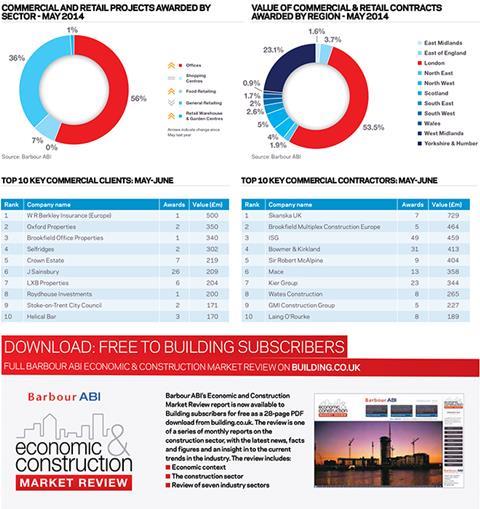