A night in the limelight 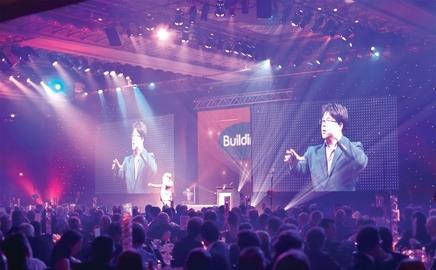 The Building Awards on 22 April was quite a party, and nobody had more to celebrate than Contractor of the Year Wates, top chief executive John McDonough and Tim Byles of Partnerships for Schools

An Olympic legend, a champion gymnast and one of the country’s top comedians joined more than 1,300 construction professionals to celebrate the 16th annual Building Awards at the Grosvenor House hotel in London. The prizes were handed out by comedian Michael McIntyre, who overcame an early hurdle when an indoor firework set the stage on fire, saying: “Has anyone got the phone number of the accident helpline? I’ve had an accident at work. You’re the editor of this magazine – you’re going down for this!”

Other attendees included Olympic gold medallist rower Sir Steve Redgrave and former gymnast Suzanne Dando, who received a strong response when she solicited a quote for some building work during her speech on behalf of the Prince’s Trust.

But the big winner of the night was Wates, which picked up the Major Contractor of the Year (over £300m) award for the second year in a row. The panel of judges praised the firm for achieving five years of consistent profit growth and highlighted projects including six 22-storey towers in Westminster and a £45m refurbishment of the former Allders building in Leeds’ city centre.

Another big win went to John McDonough of Carillion, named Chief Executive of the Year.

In his acceptance speech, the 58-year-old, who has been head of the firm since 2001, gave a rallying cry to the industry: “We’re going to have a tough three to five years, and in these tough times we need to reshape the industry again. It has a vital role to play in the low-carbon economy.

“There are some very good initiatives out there and it is something we should all get behind. Out of all these tough times come great companies, great people and a great industry.”

Also celebrating was Partnerships for Schools, which took home the Client of the Year award. Chief executive Tim Byles was also honoured as Personality of the Year.

Throughout the evening, winners voiced their enthusiasm for the industry and for their own projects. John Frankiewicz of Willmott Dixon, winners of the Wrap Awards for Sustainable Construction, said: “Sustainability is really where the agenda is – it’s so key now – and it’s the cornerstone of our strategy, so we’re really happy to win the award. It’s fantastic.”

Adam Turk of Polypipe Terrain, who scooped the Manufacturer of the Year gong, summed up the mood of elation: “Winning this award, and being described in the process as ‘a truly remarkable company’, is a very proud moment for our team.”

Meanwhile, the ceremony was visited by a group of construction workers who gathered outside to protest against blacklisting. Organised by the Blacklist Support Group, some of the protesters wore masks to hide their identities, although the giant inflatable rat they brought with them took no such precautions …