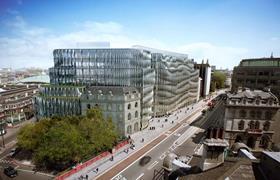 All 135 jobs have been lost at collapsed specialist contractor Airedale Mechanical and Electrical, administrator KPMG has confirmed.

The £66m-turnover Leeds-based firm is the largest building services firm to fall into administration since MJN Colston collapsed in February.

The firm, established in 1984, has worked with contractors Wates, Willmott Dixon and Galliford Try in recent months.

The company’s biggest job was a £10m M&E contract with Balfour Beatty for the 60 Holborn Viaduct (pictured) office development in London.

“The contractor, which is headquartered near Leeds Bradford Airport, Yeadon, and works on sites across the UK, has experienced a difficult trading environment in the last 18 months.

“A sale of the business was not feasible so after entering administration it ceased to trade and its 135 employees were made redundant.”

Airedale International Air Conditioning - also based in Leeds - has no association with Airedale Mechanical & Electrical and continues to trade normally.