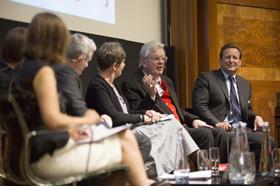 Architecture minister Ed Vaizey has again insisted it is up to the industry and not government to implement the findings of the Farrell Review.

The review, which was commissioned by Vaizey, came out in April and made 60 recommendations.

But Vaizey told a fringe meeting at the Conservative Party conference in Birmingham yesterday evening that it was not the job of government to enact its findings.

He said: “It’s very important that this review doesn’t become a lobbying exercise to government, saying that government has to do this or that. If you do that you’ve lost the point of the review. Developers should be very much part of this.

But he said the skills of planners in place-making had to improve and that architecture training had to be made more affordable and accessible.

Speaking at the same event, report author Terry Farrell said he and the team behind the report were “committed to following it through.” He added: “I was told by someone else who had conducted a similar review that the only way to make it stick would be to become a raving nutter.”

Farrell said he had received enthusiastic support to the findings from skills minister Nick Boles and that he was pressing the local government select committee to look at the issue. “I believe it has legs,” he added.