Global engineer posts strong results for the year to March 2016

Arup has posted a jump in revenue and pre-tax profit as staff numbers headed towards the 13,000 mark.

The firm did not break down revenue for individual regions but in a statement accompanying the results, its chairman Gregory Hodkinson said work in the US and Canada had strengthened.

He said the UK “also enjoyed a positive year despite uncertainty ahead of the EU referendum” – although reports last September said the firm was preparing to cut 10% of its 900-strong London buildings business due to a slowdown in the commercial sector caused by the Brexit vote.

Hodkinson added Arup had “successfully weather[ed] the property market slowdown in China, which remains one of our key strategic regions [and] we also saw modest growth in India, which continues to be a market of great interest”.

The firm said it had received 8,000 applications for just 275 UK graduate positions while it increased the amount of profit it shares with its employees by 53%. The highest paid director, who is not named, took home close to £1.1m last year which included £200,000 of “assignment related benefits”.

In the autumn, plans by the firm’s architecture arm Arup Associates for a 32-storey tower in the City of London (pictured) – which will see Peter Foggo’s 2 and 3 Finsbury Avenue Square at Broadgate demolished – were given the green light.

Foggo designed 2 and 3 Finsbury Avenue Square when he worked for Arup Associates. They opened in 1986 and, along with No1 which was listed at grade II in January 2015, were the earliest parts of the landmark City development.

The new skyscraper comprises a set of four tapered buildings rising up to 32-storeys in height and providing 62,000 sq m of office space to accommodate around 5,000 workers, 4,000 sq m of retail space and nearly 1,300 sq m of restaurant on the tower’s 13th level, which will also include a public roof terrace. Developer is British Land. 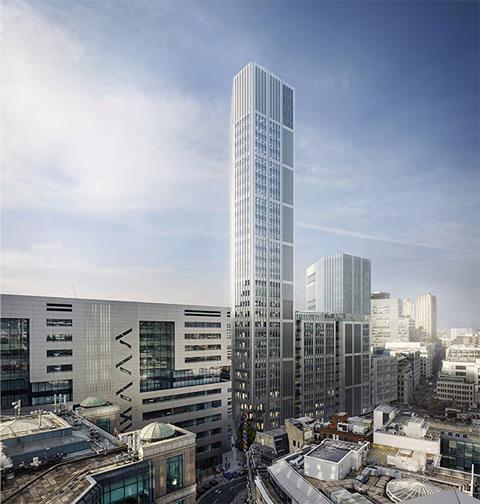