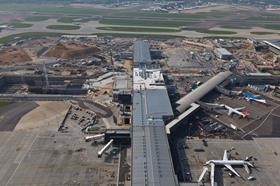 BAA has confirmed it is delaying the construction of the £2.5bn second phase of its Terminal 2 building at Heathrow in its latest five year business plan for the airport, published today.

The delay, revealed by Building in October last year, will see building work starting on the £2.5bn project at the end of the five year period, called the sixth quinquennium (Q6), which runs between 2014 and 2019.

However, the business plan reveals that Heathrow’s owners BAA do not now expect to complete the project until “late in Q7” – meaning it could be as late as 2024 before the building is complete.

In 2010 BAA said the building, which will add capacity for a further 10 million passengers a year and had originally been seen as the focus of the Q6 programme, would be complete by 2019.

The investment level laid out by the plan is at the bottom end of the £3-4bn which had been expected by contractors and consultants for the Q6 period.

In the document, published on the BAA website today, BAA confirmed it will seek to complete and open the first phase of Terminal 2 by 2014, enabling it to close Terminal 1.  It added “we will also commence design and delivery of a further phase of T2, for completion late in Q7, in order to be able to continue to provide high quality terminals into the future as passenger numbers grow.”

Other works over the period include the development of a new integrated baggage system; and the construction of new taxiways and stands which will allow Heathrow to accommodate more of the most modern aircraft. Overall the emphasis will be upon smaller changes which deliver a better passenger experience, improved resilience and keep costs down.

In a statement the airport operator said: “Our plans seek to strike the right balance between continuing to invest for passengers and keeping charges at a level that is affordable for airlines. The lower level of capital investment than in Q4 and Q5 will help to keep charges at an affordable level for airlines.”

The publication of the more modest plans follow the departure of BAAs high profile capital director Steve Morgan in October, after he said “The next quinquennium at BAA will largely be about asset replacement rather than major new projects. I didn’t want to spend the next few years watching the paint dry.”

The publication also follows continued uncertainty over Heathrow’s long-term future as the UK’s only hub airport, with London mayor Boris Johnson yesterday reaffirming his opposition to further expansion at Heathrow. Giving evidence to MPs on the Transport select committee Johnson said he wanted a new hub airport to be constructed to the east of the capital, a move which he accepted might result in the closure of Heathrow.

Colin Matthews, chief executive of Heathrow said: “We have invested billions of pounds in new facilities such as Terminal 5 in recent years and passengers say they have noticed the difference. Our plan for a further £3 billion of private-sector investment will further improve the airport for passengers. The plan represents good value for money for airlines and passengers and comes at no cost to taxpayers.”