Balfour axes up to 400 jobs in cost-cutting drive 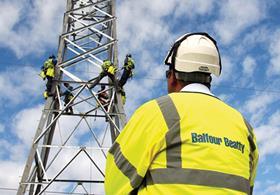 Balfour Beatty has already cut up to 400 back office jobs as part of its cost-cutting drive that began at the start of the year, chief executive Leo Quinn has said.

Quinn told analysts in the firm’s half-year results presentation yesterday that “three to four hundred” jobs had been cut so far and back office department budgets had been “halved”.

The cuts are focussed on Balfour’s back office functions - including finance, IT and legal - and “stripping out layers of senior management”, Quinn said, stressing the firm was “focussed on retaining frontline capability”.

Under Balfour’s ‘Build to Last’ turnaround programme, the firm is aiming to cut £100m of cost out of the business by the end of next year. Balfour said yesterday it had already made £25m of savings, in half-year results in which the firm slumped to a £150m pre-tax loss.

Building revealed last month that Balfour was consolidating its back office functions at group level, with its powerful UK construction arm, Construction Services UK, first to undergo the changes and lose some of its autonomy.

On the analysts’ call yesterday, Quinn also revealed the firm was considering scaling back its rail work, saying: “We need to find a way we can make a return there, or we won’t operate in those markets.”

“[We’ve been] looking at withdrawing from contracts we were making losses on. There’s no point in being a busy fool.”

In the power sector, he said Balfour would look to “renegotiate some of our contracts” to get better deals.

He also said the firm is setting up more “strategic partnerships” with suppliers to ensure “we’re reserving capacity for the future, rather than looking at short term gains.”

Quinn also advised that he did not expect the government’s planned introduction of a living wage to impact the business, unlike Interserve, which told investors yesterday the move could hit profit by up to £15m.

Quinn said: “We don’t see that having an impact. It’s not something we’re looking at. But if that changes we’ll let you know.”

Commeting further on ‘Build to Last’, Quinn said: “We’ve been around for 100 odd years. It’s my intention that we’ll be around for another 100. So we’re putting in the right foundations and building on it.”