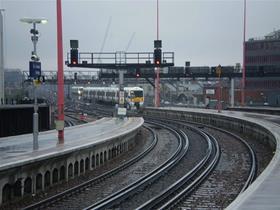 Balfour Beatty has pulled out of a £75m rail electrification scheme in the North West after saying it was “unlikely” to deliver the work “on time and to budget.”

The troubled contractor has dropped out of the remaining phases 3-7 on the programme, and confirmed it has stopped work on the Blackpool to Preston rail electrification scheme.

In its half-year results to 26 June 2015, Balfour said that after a review of its rail schemes in the North West, its “proposed alliance” with Network Rail “was unlikely to meet its stated objectives of delivering the scope of the work on time and to budget.

“In July, it was agreed with Network Rail that Balfour Beatty would not continue with the alliance framework for phases 3-7.”

A Network Rail spokesperson said: “By mutual agreement, Balfour Beatty will be leaving the partnership delivery of North West Electrification.

“This is the appropriate time following the completion of phase two between Manchester, Liverpool and Wigan.

“We will be retaining Balfour Beatty’s design services and a new contractor will be appointed shortly. A full transition plan is in place to ensure that this work continues.”