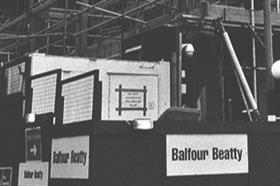 Balfour Beatty has paid down 45% of its gross debt in the last 12 months after using cash reserves to repay off a £253m convertible bond.

The country’s largest contractor has seen its debt shrink from £640m to £350m while other large contractors begin to creak under their debt load.

Interserve’s share price hit a new low of 22p today – a 56% fall in the past month after the share price stood at 50.5p on 5 November – as it continues to firefight its £650m net debt, while Kier launched a £264m rights issue on Friday to cut debts.

Convertible bonds are a type of bond which can be converted into a set number of shares in the issuing company – but pay out less interest than normal bonds. The firm said the bond had not been transferred into shares.