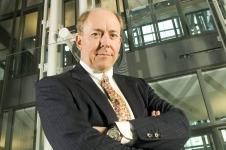 A £170m PFI hospital deal in Fife took Balfour Beatty to the top of the leader board in April, but the contractor’s total haul of £238.9m would only have been enough to secure third spot in the same month last year.

In further proof that the recession has sunk its teeth into the contracting sector, the overall volume of work won by the top 30 companies in April was 24% less than 2008. Compared with April 2007, when the industry was at the height of the boom, the total has dropped 36%, from £2.2bn to £1.4bn.

The year-on-year declines were marginally worse than those registered in March, which were 23% behind 2008 and 33% lower than 2007.

However, a look at the list that includes civils shows where the money can be found at the moment. April’s total of £2.7bn was 15% up on 2008 and 6% higher than 2007. The figures include huge wins, such as Costain’s £397.6m waste deal in Manchester, Carillion’s £223.5m win for the 5C satellite terminal at Heathrow and £250m-worth of framework deals won by Amey from Network Rail.

Howard Seymour, construction analyst at Numis Securities, said: “The focus from the government is increasingly on the big ticket items and if you look at the order books of the big boys they are all up, with the exception of Morgan Sindall.”

He said the trend for big public sector contracts would increasingly put the squeeze on small players. “This thing has started at the bottom and will slowly work its way up the ladder,” he said.

This information is compiled for Building by Barbour ABI. Call 0151-3533 500, email Info@ABIBuildingData.com or see www.barbour-abi.com

Barbour ABI’s figures include UK contracts with a value of £100,000 or above, and all work awarded by negotiation or competitive tender, including residential and civils work, unless stated otherwise.