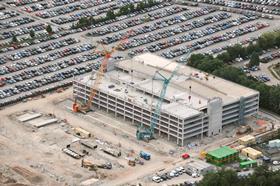 Bam has been appointed by Manchester Airports Group to build two multi-storey car parks at Manchester and Stansted airports, with both jobs worth a total of £60m.

At Stansted the firm’s south east operation will be building a design by Pascall + Watson for a 2,500-space car park on five upper levels, with completion expected next May.

Earlier this month Bam announced new regional directors would be heading up the contractor’s London and Midlands operations.

Rod Stiles, previously a director of Bam in the Midlands, has been appointed as regional director for London.

Stiles was replaced in the Midlands by David Ellis, who has also been appointed to the senior management team of Bam Construct UK.