Birmingham office scheme is the final phase of Ballymore’s 96,000m2 development in the city’s Snowhill area 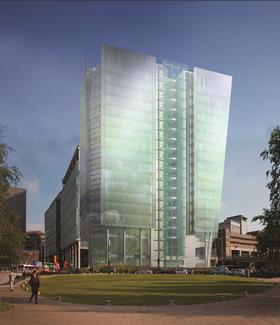 The scheme is the third and final phase of Ballymore’s 96,000m2 development in a core part of the Snowhill area of central Birmingham.

Birmingham’s Snowhill area is at the forefront of rapid commercial expansion across the city centre, with the city boosted by the planned arrival of HS2. Birmingham City council has earmarked Snowhill for £600m of development work in a 20-year masterplan for the area launched in February, with the aim of creating a Canary Wharf-style commercial district.

The Three Snowhill office building replaces a previous plan for the site by Ballymore to build a 137m-high, 43-storey residential tower and accompanying 25-storey five-star hotel, which won planning permission in 2007 but was mothballed in 2010 following the credit crunch.

Three Snowhill is targeting a BREEAM Excellent rating. WSP is structural engineer, Arup is MEP consultant, Gleeds is project surveyor and the project architect is Weedon.

Construction is expected to start in September and complete in the first quarter of 2018.

Ballymore project director Richard Probert said: “[Three Snowhill] is the final component in what has become a landmark gateway development for our city.”

Dave Ellis, Bam’s construction director said: “This is a signature project for Birmingham and its commercial appeal.”