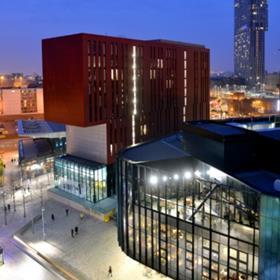 Bam has won the deal to build a tower block in Manchester as part of a mixed-use development called First Street.

Picked by developer Ask, Bam will start work on the 17-storey hotel and office building next year.

Planning was granted at the end of last week for the 5plus-designed tower block which features a hotel across the top six floors, with the rest of the development due to comprise office accommodation.

Kier had also been shortlisted on the project.

The First Street Estate is a £500m 17-acre scheme (pictured) in the centre of Manchester and is expected to deliver at least two million square feet of office, residential and leisure space once completed.

It is being developed by German firm Patrizia, an investment manager listed on the German stock exchange. Ramboll is the structural engineer on the project.

Earlier this year, Bam was drafted in to another Ask scheme – a £40m office block called 100 Embankment in the middle of Manchester which had been due to built by Carillion.

And it was brought in as the replacement contractor to finish off the £250m office scheme Carillion won back in 2016 at One Chamberlain Square at Argent’s Paradise Birmingham development.

The win comes on the back of news earlier this week the firm has won a high-profile deal to build the new UK headquarters of tech giant Facebook at Argent’s King’s Cross redevelopment.