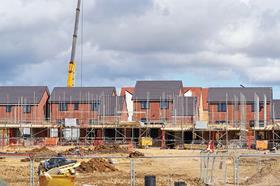 Berkeley and Redrow have been chosen by housing association Peabody to build a combined 1,800 homes in London, including at one of Arsenal Football Club’s former homes.

Berkeley will build 1,500 homes – 35% of which will be affordable - on a seven-hectare disused site in West Thamesmead that was home to the Premier League football club until 1913.

They will comprise homes for private sale and a range of retail, commercial and community facilities. The affordable properties will be delivered via funding from the Greater London Authority (GLA) through the Thamesmead Housing Zone Agreement.

It will be a short walk from Peabody’s £4bn, 11,500 home Thamesmead Waterfront scheme that will encompass one billion sq ft of commercial and leisure space. The housing association is currently looking for a development partner to work with on this project.

It said the scheme will be the first in a number of major developments it brings forward as part of the wider regeneration of Thamesmead, which is expected to deliver 20,000 new homes.

In Newham, Redrow will build 295 homes in Royal Docks, east London as part of a £125m scheme, again of which 35% will be affordable.

They will be a mix of studio, one, two and three bedroom apartments, which will be set across four buildings ranging in height from 5 to 13 storeys.

These will be set around a central courtyard that will be accessible to residents, with private amenity space for ground floor apartments and select top floor apartments.

The properties will be a five minute walk from Pontoon Docks DLR station, which provides links to central London and Stratford International. From 2018, Crossrail will begin serving nearby Custom House station.

Peabody has also taken on a site formerly owned by Brent council, which is next to Wembley Stadium in north-west London and provide 198 homes – all of which will be affordable.

Brendan Sarsfield, chief executive of Peabody, said it will do more joint venture and development partnerships in the future as it looks to ramp up its development pipeline beyond 2,500 homes per year.