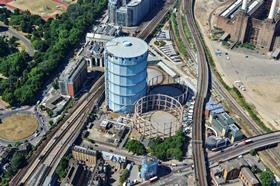 A £367m mixed-use development in Battersea, London has been given the green light by Wandsworth council.

The project is the first scheme by St William, a joint venture between National Grid and the Berkeley Group, to secure planning since the JV was launched in November 2014.

A total of 839 homes will be built on a five acre site of former gasworks located between Battersea Park and Battersea Power Station.

Designed by architects Squire and Partners, the master plan consists of 12 buildings ranging from two to 26 storeys in height as well as a new public square.

The site is due to be vacated in spring 2016 with construction set to begin soon after. The project is set to be completed by 2019.

The scheme will also include commercial, office, community and leisure space, and will be connected to the Westfield London shopping centre via a new bridge across the London Underground Central line.