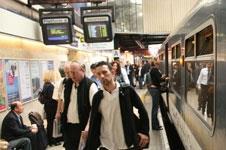 The completion of Blackfriars station, one of the main projects on the upgrade of the Thameslink rail line, has been put back four months until spring 2012

The cost of the scheme is thought to have risen £100m.

Network Rail is now under pressure to finish the station in time for London’s Olympic Games, which will begin at the end of July 2012.

A source at Balfour Beatty, the main contractor on the job, admitted that there had been issues with the design work. He said: “There have been significant problems with the design of the project and now they’re having difficulties agreeing a final target cost.”

Two separate sources said the cost had increased by about £100m.

Network Rail said the extra time would be needed because repair work on Blackfriars bridge, which will be the first in London to act as a train station, is proving to be more extensive than originally envisaged.

A spokesperson said: “The delay is a knock-on effect of that and completion of the project is later than expected, but we hope to be done in time for the Olympics.”

Network Rail declined to discuss the cost of the project.

Another source said the project had gone through extensive value engineering to reduce cost, but that contrary to speculation last year, the platform roof would still be included in the finished station.

The work involves lengthening platforms for 12-car trains, building a new roof over the bridge and extending the station across the Thames to create a station entrance on the south bank of the river.

The £5.5bn Thameslink upgrade is intended to improve services on the rail line, which runs between Bedford and Brighton, and which suffers from severe overcrowding.