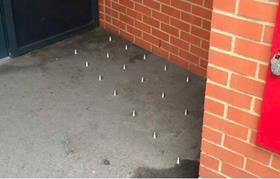 Conical metal studs installed on the ground outside a London housing development, seemingly in a bid to divert rough sleepers from the spot.

London mayor Boris Johnson has added his voice to condemnations of pavement “spikes” designed to deter rough-sleeping outside a luxury apartment development in the capital.

The measure – likened by some to pigeon deterrents installed on many central London monuments and window-ledges – was introduced outside a building in Southwark Bridge Road, south London, in recent weeks, the Guardian reported.

It said Johnson had called the measure “ugly, self-defeating, and stupid” and called on the developer to remove them after their presence gained attention on social media.

Katharine Sacks-Jones, head of policy and campaigns at homelessness charity Crisis, told the paper that such measures “would never tackle rough sleeping”.

Southwark council said it was investigating the installation but was constrained in its ability to respond unless there had been a breach of planning regulations.