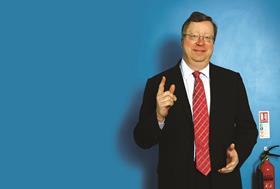 Cornerstone, the firm set up by former schools capital boss Tim Byles, has joined one of the teams bidding for the Ministry of Defence estate arm’s £400m private sector partner role.

The Telereal Trillium consortium, which includes KPMG and Mace, is one of three shortlisted teams bidding for the contract. The winning consortium will take charge of the DIO’s operations, including managing the £20bn defence estate, overseeing around £3bn in annual spending and rationalising about 4,000 sites around the country.

The strategic business partner will also be responsible for managing a suite of construction contracts worth around £9bn.

The other two shortlisted bidders are Serco, DTZ and Bechtel; and Capita, URS and PA Consulting.

As Building revealed last July, the DIO revised the £100m value of the contract, set out in the original OJEU, to £400m plus, depending on performance.

Speaking to Building this week, Telereal Trillium executive chairman Ian Ellis said Cornerstone had been brought on board as a “key adviser” to the Telereal Trillium-Mace-KPMG (TMK) consortium, with the role envisaged to continue if the TMK team wins the contract. Ellis said Cornerstone’s expertise in bringing public and private sectors together to create regeneration opportunities out of surplus public land and property would form a key part of TMK’s bid.

He said: “The DIO is looking for a proposal showing how you will improve the infrastructure for the military, but in doing so we’re very keen to talk about legacy and how, if you spend money, you make sure it is used to maximise other opportunities.”

Byles added: “The more efficient use of the estate, creating value in surplus assets, making sure that the investment in those surplus assets is appropriate for the further development of the communities in which they sit - that’s what we’re looking at.”

Byles said his experience running PfS - with its blend of public and private sector expertise - would help shape the TMK bid. The DIO is considering two options for its strategic business partner: an “insourced” model - with the winning consortium sending an executive team into the DIO to run its operations - or an incorporated model that will involve the creation of a new government-owned company, similar to PfS, that would be run by the winning consortium. Each consortium has been asked to submit a bid for both models.

Byles said: “DIO is trying to work out whether keeping the insourcing model or going to an incorporated model is the right thing to do. This is a journey to explore what are the best options.”

Byles said a priority for the successful consortium would be ensuring the £9bn suite of New Generation Estates contracts (NGEC) - which have been delayed by two years until 2014 - are “in place and working effectively and smoothly”. “Making sure the construction industry has good access to work flowing through is going to be crucial going forward,” he said.

Ellis added that although procurement on the majority of the New Generation Estates contracts was under way, this was not likely to lead to problems once the strategic business partner was appointed: “They’re very modern contracts so I don’t think they will cause us concern. The big role is ensuring they are managed efficiently.”

RACE FOR THE PRIZE

Three consortiums are in the running for the Defence Infrastructure Organisation’s strategic business partner role, with the contract valued at £400m-plus depending on performance. Bids are due to be submitted in June with an appointment expected before the end of the year. The winning consortium is expected to be in place by March 2014.

The full shortlist is: