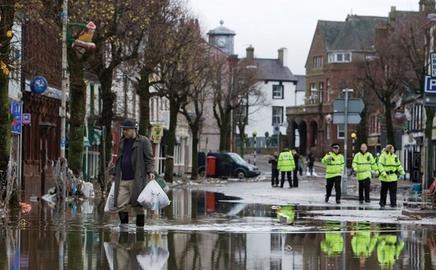 Consultant issues ‘national call’ for staff to carry out safety checks on 1,800 bridges in Cumbria

Capita Symonds has issued a national call to draft in up to 100 employees this week to inspect flood-damaged bridges in Cumbria.

The consultant, which has a partnership with Cumbria council, is managing a programme to inspect the county’s 1,800 bridges in the wake of last week’s floods, which washed away six crossings and damaged 1,300 homes.

Robin McCartney, associate director of Capita Symonds, said the firm would need 30-50 bridge engineers, and an equal number of other staff to ensure the process was managed safely, and had called all its offices to ask them to put people on standby.

He said: “At the moment we have some bridges closed because of structural damage, others because we don’t have sufficient information. We are planning to do the initial investigation before the end of the week and each bridge will open when we feel it’s safe.” He said the firm had received a “huge number” of offers of help from other businesses.

Experts say the cost of repairing Cumbria’s bridges could reach hundreds of millions of pounds. Some have called for the inspections to be extended to other parts of the country.

Ian Firth, chief operating officer at bridge specialist Flint Neill, said: “This has taught us a lesson. With old bridges built on soft ground, river scour is an issue. It would be sensible to have a rigorous inspection programme in areas prone to flooding.”

Meanwhile, the National Federation of Builders urged insurance firms to appoint local building firms for the clear-up. Marie Hill, regional director, said: “Many small firms are already struggling in the recession and in some parts of Cumbria, the floods have created major disruption. The clean up could provide a much needed shot in the arm for the local construction industry.”

Businesses around Cockermouth said they were concerned insurance providers would give work to national firms, as they did during the Carlisle floods of 2005. Lee Wilson, owner of Copeland & Allerdale Roofing Services, said: “The insurance providers tend to come in with the big boys who have reduced rates and it can be some time before local firms are allowed a piece of the work.”

These floods almost seem like a godsend for us. I employ four other men and we had been struggling in the credit crunch. I was finding it difficult to find work to keep hold of them all. But these floods should give us enough employment to tide us over. Hopefully we should be very busy in the next few months.

We’ve already been called out to two jobs to do some minor repairs – we’ve been working in the drizzle, everything is so wet. But half my workforce is stuck on the other side of the river, so with all the transport and bridge problems it makes it very hard. We’re having to travel 20 miles when usually it should be two.

Once people can get dehumidifiers in, we’re hoping that’s when the real work will begin. We’re just waiting for everything to dry out. We’ve never had floods like this – I’ve never seen it this bad.

Neil Sandelands, company director for John Sandelands, based in Workington near Cockermouth

If clients think flooding is increasingly likely, they might question whether force majeure, a common clause in JCT contracts, should be looked at in a different way. The provision allows contractors to apply for an extension of time for a “relevant event”, which currently includes flooding. It does not allow them to claim for costs caused by that delay, nor for any damage to their sites or tools, as it is presumed these would be covered by a firm’s insurance. A change could mean contractors would be liable to foot the bill for extra time as well. Subsequently contractors could be hit by a rise in insurance premiums which might go up if the contracts are altered.

Jonathan Marshall, partner and head of construction and engineering at Burnetts Solicitors, based in Carlisle

The floods in numbers