Carillion to start on Paradise Circus in New Year 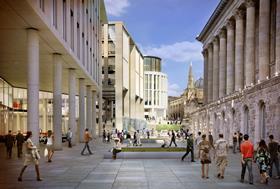 Carillion will start work next month on the demolition of Birmingham’s brutalist Central Library, the scheme’s developer has confirmed.

The knocking down of the library, due to start on site on January 5, will help pave the way for the £500m redevelopment of the surrounding 17 acres of land in city centre Birmingham.

The first phase of the so called ‘Paradise’ scheme, which will be managed by Argent, includes two speculative office buildings that have been designed by locally-based architect Glenn Howells, for which a detailed planning application will be submitted early in the New Year.

The office blocks are designed to deliver 300,000 sq ft of grade A office space.

The development is being undertaken by a joint venture between Birmingham City Council and the BT Pension Scheme, of which Argent is a development arm.