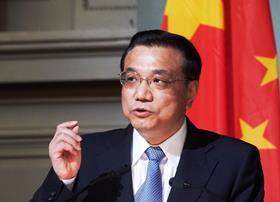 During a visit by David Cameron, Chinese premier Li Keqiang has said that the country could play a major role in the construction of High Speed 2.

According to The Guardian, Li said at the Great Hall of the People on Monday: “The two sides have agreed to push for breakthroughs and progress in the co-operation between our enterprises on nuclear power and high speed rail.”

“We have become indispensable partners for each other’s development. China and the UK must treat each other as equals.”

Speaking to the great hall, Cameron said: “The pace and scale of economic development and urbanisation dwarfs the British industrial revolution of two centuries ago. I see China’s rise as an opportunity not just for the people of this country but for Britain and for the world.”

Speaking at a Chinese exhibition at the V&A, Cameron said: “It seems to be an absolute high-speed revolution taking place [in China], and I’m looking forward to travelling on a high-speed train when I’m in China.”

A previous venture into high speed rail resulted in the Shanghai Maglev train, which since its opening in 2004 has been the world’s fastest train in regular commercial service at 431 km/h.