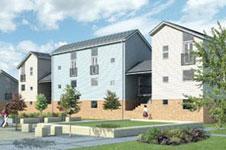 City analysts have dismissed rumours that housebuilder Redrow is about to be bought by a rival.

The housebuilder was linked to a takeover by Persimmon, Barratt, Bovis and Bellway after a surge in its share price in recent days.

Analysts said the most likely explanation for the jump was short sellers going back to the market to buy shares after the collapse of investment bank Lehman.

One analyst said: “The rumour is that Lehman had lent out 16% of Redrow shares to short sellers. When it collapsed they had to close out their positions.”

Short sellers borrow shares from an investor to sell in the hope of buying them back at a later date when the price has fallen. They take a cut of any profit.

He added: “The best word to describe the prospect of a takeover by Barratt or someone else is ‘bollocks’. Housebuilders aren’t even buying land at the moment so why would they want a PLC with all the associated overheads? Added to that there are too many question marks over the price of land at the moment.”

Hedge fund Tosca holds a 27% in Redrow, which analysts believe fuelled the rumours, together with the recent consolidation in the banking sector.