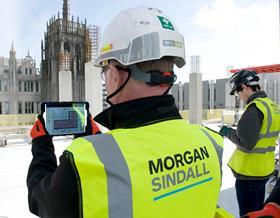 Morgan Sindall confirmed its status as a City darling with a slew of analysts’ notes talking up the contractor.

The firm yesterday posted another set of impressive figures with pre-tax profit up 19% to £35.5m on turnover flat at £1.4bn in the six months to June.

This has prompted the contractor to upgrade its year-end forecasts with pre-tax profit now expected to top earlier predictions of £81m.

This figure is set to be around the £85m mark and chief executive John Morgan said: “We wouldn’t have upped the expectation if we didn’t feel positive,” Morgan added.

“For any business in the current climate to say at the halfway stage that it will outperform expectations is quite ballsy,” said Applied Value’s Stephen Rawlinson.

“It is unfortunate for [Morgan Sindall] that its hard work is showing through as promised at a time when investors are wary of the sector. [But] it is possible to make good and consistent earnings in this area and avoid large marquee jobs that can too easily backfire, the real causes of the decline of Carillion, Interserve and now Kier.”

In a note from Numis, analyst Howard Seymour said: “Morgan Sindall’s strategy continues to drive sector leading performance [and] demonstrate[s] how well the group is doing while peers flounder.”

Margins at the firm’s fit-out division slipped to 4% from 4.4% but in its note analyst Peel Hunt said: “Margins of 4% are encouraging given the tightening market.”

City broker Liberum said: “There is increased [fit-out] competition which is leading to margin pressure [but] Morgan Sindall is the clear market leader.”