​Cleveland Bridge on ‘brink of collapse’

Cleveland Bridge is on the brink of collapse tonight with the firm reportedly having called in the administrators.

In a statement this evening, the Darlington-based steelwork contractor, which worked on the scheme to rebuild Wembley Stadium as well as the Shard at London Bridge, said: “HR1 notices have been registered and all 230 staff have been informed about potential redundancies. We are actively taking advice and looking at all opportunities.” 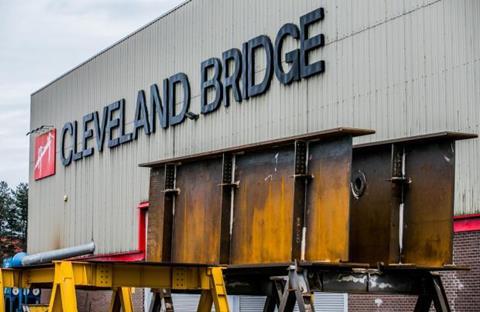 Cleveland Bridge has been in business for nearly 150 years

A HR1 form is a redundancy notification which must be completed when an employer plans on making 20 or more employees redundant.

According to the Northern Echo, staff were told to come in and retrieve personal effects from their desks this morning. The paper said one unnamed member of staff claimed there was now a 48-hour battle to find a buyer.

The company, which has been majority owned by Al Rushaid Group since 2002 after the Saudi Arabian firm initially took a 50% stake two years earlier following an MBO by Cleveland Bridge management from previous owner Kvaerner, reported a £457,000 pre-tax loss in its last set of accounts for the year to December 2019 on turnover up 30% to £48m.

Cleveland Bridge’s recently completed jobs include fabricating and installing 12 bridges on the M4 upgrade in Berkshire being carried out by a Balfour Beatty/Vinci joint venture.

As well as its factory in Darlington, the firm also has manufacturing centres in Dubai and Saudi Arabia.

Founded in 1877, Cleveland Bridge produces 150,000 tonnes of engineered steel every year. Its other historic projects include the Sydney Harbour Bridge in 1932, the Severn Bridge in the 1960s, and the QEII Bridge, better known as the Dartford Crossing, in 1991.

Cleveland Bridge hit the headlines in 2006 when it and Wembley main contractor Multiplex ended up in the High Court in a bitter row over who was responsible for delays to the project which ended up busting a series of deadlines before opening in time for the May 2007 FA Cup final. Multiplex was seeking £45m in damages with Cleveland Bridge counter-claiming for £25m.

The court heard details of a notorious email sent in May 2004 by a then Multiplex executive which Cleveland Bridge claimed was proof it was trying to send the firm under. In it, the executive wrote: “Plan B: CBUK fixed and fuck them later?” Multiplex claimed Cleveland Bridge had devised a plan to stop work on the job under the pretext Multiplex had repudiated its contract.

Cleveland Bridge was kicked off the job by Multiplex in 2004 and replaced by Dutch steelwork contractor Hollandia with the court also being told that the original £55m cost of the steelwork contract had ballooned to nearly £200m.