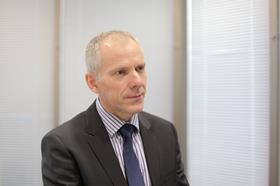 Jones Lang LaSalle has promoted Helen Gough to head of its buildings and construction business.

Keepmoat has appointed Geoff Scott as community investment manager based in the North-east and Barry Douglas as land and partnerships manager, who will head up the planned expansion of Keepmoat Homes into Scotland.

Mace has appointed Trevor Bacon (pictured) as managing director of Como, the firm’s fit-out business. Bacon replaces Steve Root, who has stepped down.

DAC Beachcroft has appointed James Harrison and Warren Kemp as Newcastle-based partners in its construction and engineering practice.

BLP has appointed Karen Friebe as a partner.

Taylor Wessing has appointed Matthew Jones to its construction and engineering group.

Mayer Brown has appointed Patricia Jones as a partner in its London-based real estate group.