Contractors and major clients, including Network Rail, are bracing for the impact of a crane drivers strike 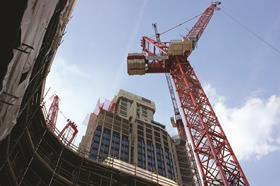 Contractors and major clients, including Network Rail, are bracing for the impact of a crane drivers strike that could see work being halted on major building sites around the country.

The union said it was now in consultation with its activists at the company and the exact dates and nature of the industrial action were set to be announced imminently.

It is understood that all sites where there are HTC Ucatt members employed could be affected by the action, with the union saying these include Land Securities’ Nova Victoria scheme, where Mace is the main contractor; Mace’s South Bank Tower project (pictured); Network Rail’s London Bridge station redevelopment; Lend Lease’s Elephant & Castle scheme; as well as the Atomic Weapons Establishment at Aldermaston.

The union said the action could affect a number of other major contractors including Kier, Bam, Costain, and Vinci.

A Network Rail spokesperson said it was “monitoring the situation”.

“As soon as further details are released we will be able to work with our supply chain to minimise the effect that any action might have on our work at London Bridge,” they said.

The crane operators want HTC to restore pay in real terms to pre-recession levels, but to date HTC has not made a pay offer that meets Ucatt members’ expectations.

Steve Murphy, Ucatt general secretary, said: “This result is so emphatic that there is no doubt that within days key construction sites will grind to a halt.”

Murphy added: “HTC needs to understand that crane drivers believe that they deserve a decent pay rise and are prepared to fight to win one. The only people who can prevent construction chaos is HTC.”