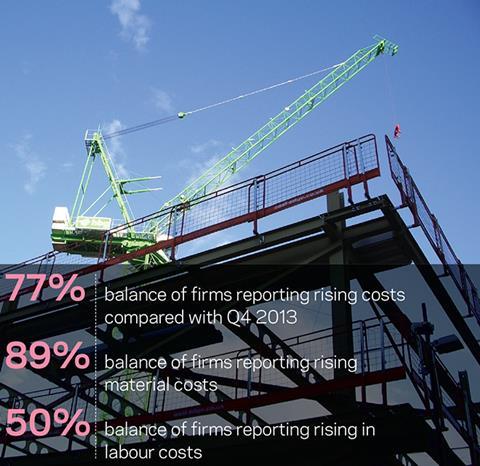 The construction industry has enjoyed a fourth consecutive quarter of growth in activity for the first time in six years, but firms continue to face the squeeze as material and labour costs rise, according to the Construction Products Association.

The survey found private housing was the key driver of activity, with 57% more contractors reporting that private housing output rose during Q1 2014 than fell, which is a sharp rise on 20% in Q4 2013.

This came after the latest Office for National Statistics construction output figures showed private housing continued to be the main driver of recovery (see box right).

The CPA survey also found 22% more building contractors reporting a rise in commercial offices and retail output in Q1 2014 than a fall, compared with 8% in Q4 2013, a significant rise in just three months.

However, the survey also found that contractors were continuing to experience rises in costs, with:

Noble Francis, CPA economics director, said: “Tender prices rose in Q1, but any boost from this is likely to occur when the resulting work hits the ground later this year.

“Currently, the key concerns are the rising costs and skills availability in specific sectors, such as private new housing.”

The survey found that while there weren’t serious problems recruiting construction trades, a balance of 61% of firms reported that it was difficult to obtain bricklayers during Q1 2014 compared with 41% in Q4 2013 and only 10% one year ago.

A further 28% reported they had difficulty recruiting carpenters in Q1, slightly lower than the 32% in Q4 but contrasting sharply with the 3% that were having difficulties just one year ago.

The CECA Workload Trends Survey for Q1 2014 found that the workloads of Britain’s infrastructure and civils contractors have increased, with 39% of firms reporting increasing workloads, while 15% reported that workloads had declined.

The survey found that orders recovered strongly in Q1 2014, with 40% of firms reporting growth in orders, compared with just 3% in the final Q4 2013.

However, the survey found contractors reported escalating pressures to find suitably-qualified workers, with more than a quarter (26%) of firms struggling to find skilled employees.

Alasdair Reisner, chief executive at CECA, said the survey showed that “momentum is gathering in the recovery of the infrastructure sector”.

But he added: “There is a looming skills gap in the infrastructure sector that must be addressed if the industry is to efficiently fulfil its potential as a driver of economic growth.”

The number of specialist contractors reporting an increase in enquiries rose to 59%, the highest for over 15 years, while 50% reported an increase in orders since the last quarter.