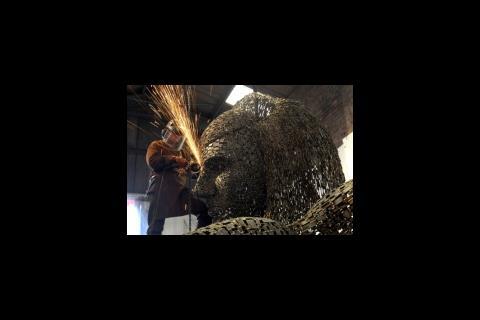 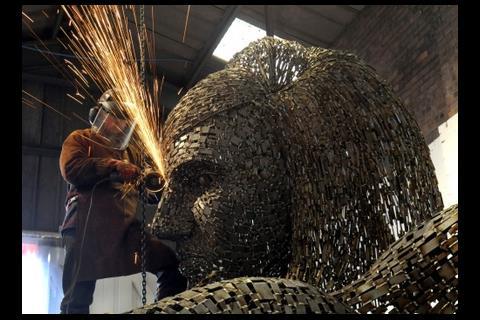 A first glimpse has been revealed of a 10m-high steel sculpture that is hoped to give an image boost to the Scottish town of Cumbernauld.

Artist Andy Scott has been working for eight months on the £250,000 project, which is due for completion this summer.

The first images show the 1.5m-wide head of the female figure, which features a sixties hairstyle in a reference to Cumbernauld's origins as a new town in that era.

The artist said: “I want to create the idea of moving from the past and reaching forward to the future to create a distinctive new image for the town and I'm confident I have achieved that in this artwork.”

Scott has already undertaken 70 public art commissions internationally, including the Heavy Horse sculpture on the M8 motorway marking the entrance to Glasgow and the 60ft-high Thanksgiving Square Beacon in Belfast.

When finished, the new sculpture will be placed to overlook the A80 northbound, north of Auchenkilns Junction.

The project was commissioned by Campsies Centre Cumbernauld, a special purpose company formed by North Lanarkshire Council to facilitate the redevelopment of Cumbernauld, as part of the Cumbernauld Positive Image Project.

Ian Nisbet, head of property services at North Lanarkshire Council, said: “This piece of unique art will raise the profile of Cumbernauld across the country by creating an iconic landmark for Cumbernauld, and we are very much looking forward to its completion.”