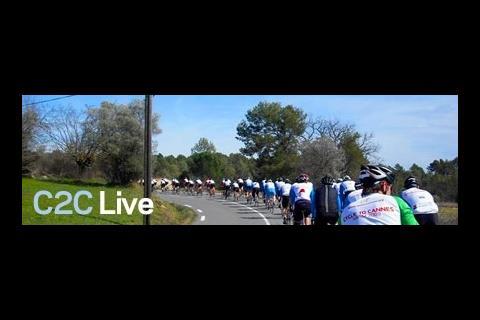 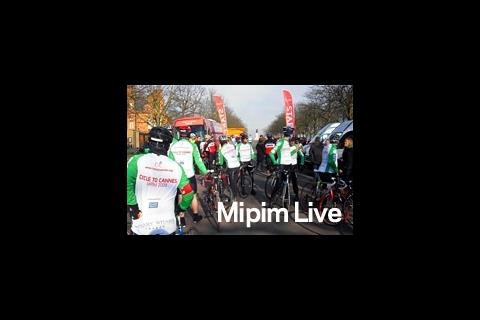 Eighty five riders from the property and construction industry are cycling 1,500km from Greenwich to Cannes in time for Mipim. Here we willl be recording the ups and downs along the way.

The riders have made it, greeted by Boris in Cannes. First Tweeter home...

3:26pm Greg Moss H\B first company to have all their C2C entrants complete all of the ride. Really good ride! Wish I could carry on to sicily

10:21pm Richard Fenne Now in Aix-en-Provence and within touching distance of Cannes. Fantastic day in the saddle assisted by sunshine and tailwinds. After five days of eating energy bars and bananas there was also plenty of wind in the peloton.

We're so used to each other's company that it didn't seem particularly strange to someone when they walked onto the bus and saw a fellow rider with his pants round his ankles smearing cream onto the sensitive areas. All of the chat tonight is about the epic last day with 170kms of difficult hills before hitting the coast.

9:49pm Nick Rees on Twitter There's only so many mars bars and bananas you can eat in one day (about 15 of each as it happens). So imagine my delight when Greg pulled out a pack of pork scratchings on stage 5 today - result! @nrees_architect

7.13pm Richard Fenne on Twitter John Nordon reveals the secret behind his immense power on the bike as displayed on the Cycle to Cannes. Click here for picture of John Norden's immense calf @rafenne

7:08pm Greg Moss on Twitter More fun today with blue sky and a tail wind. Even got the pins out. A few good opportunities to rinse it both up and down hill - hit 86kph. @ggmoss

9:07pm Richard Fenne: Today we all rode for our Mum's on Mothers Day. And what a day... a cyclists dream with the sun on our fronts and tailwinds behind us. We literally flew through the increasingly picturesque French countryside cycling from a winter's scene to a spring day.

Captain Mannering, AKA John Nordon, kept the peloton drilled as we maintained an average speed of over 28kph. Although at one point we were passed by an explosive one man breakaway in the form of a local farmer in Bermuda shorts on a mountain bike going uphill.

Steak and chips for dinner in Chanas and an early night for most ahead of the penultimate day.

5.51pm Richard Fenne on Twitter. Much needed massage after a long day in the saddle on Cycle to Cannes. Just got to Chanas. @rafenne

Great day on the road to Dijon. Hills getting lumpier and the temperature is dropping. Greg Moss had the bright idea of bringing foot warming sachets.

Saturday night and we have a lie-in tomorrow (5.15am) so the bar is full. The cameraderie is fantastic with plenty of abusive banter. The different teams are gaining identities and reputations.

Five legs tomorrow as we head to Chanas, which has had the most snow in France this winter.

Quote of the day: Male cyclist at a toilet stop fiddling with his bib shorts whilst trying to steady his bike. Female cyclist - "Do you want me to hold it......". Much sniggering ensued in the surrounding group.

7.34pm Nick Rees via Twitter C2C reaches Dijon on the A. Petrilli Memorial Day. Team HB still ripping it up riding every mile so far. 400 miles in last 2 days! Ouch!

10.23am Richard Fenne on Twitter Terminal mechanical problem for one rider. Fortunately we have spare bikes. Heading to Champagne territory #c2c2010. Derailleur derailed

7.23am Ulysse Dormoy on Twitter 200 miles yesterday. Never ridden so far. Never had so many dark moments. Must stay in my limits. Follow Ulysse at @dormoyu

7.21am Ulysse Dormoy will it be 2,3, or 4 stages today? Last stage is a long grind uphill, need to keep something in reserve! @dormoyu

5.50am Richard Fenne on Twitter. 6am depart from Reims on Day Three of Cycle to Cannes. Foggy and a smattering of ice on the roads. #c2c2010 An early start in Reims

5.30am Richard Fenne on Twitter. A cyclist's breakfast ahead of Day Three of the Cycle to Cannes.

2:07pm Richard Fenne: Weather watch: lovely crisp start to the day with some blue skies following the sunrise. Alarm call at 4.45am local time so it feels like 3.45am GMT. Breakfast at 5am which resembles a feeding frenzy that Attenborough should commentate on in a BBC HD nature documentary. The coach is back from the UK with a fixed windscreen. Shame the same can't be said about the broken Holiday Inn sign which has left the place resembling Fawlty Towers.

The rolling terrain in Northern France is typified by the wind turbines and war memorials. The peace is broken by shouts of 'hole' and 'close the gap!' however. Tonight we ride into Reims. Will have to keep the champagne on ice until Cannes though.

3:03pm Joe Morris 100k completed, in fresh conditions and a gentle tail wind, we arrive at the channel tunnel crossing. This leg of the course is a mere appetiser for the main course which pits each rider at the mercy of a gruelling +300k route per day over the next 4-5 days.

The mood in Greenwich was bubbly, and matched by the frothy lattes and bacon baps. The next 40k is all below the surface as we power to Calais in the Chunnel. A chance for my co-riders to catch forty winks! See Joe's Picture of a sleeping cyclist

2.45pm Greg Morris on Twitter. Folkestone - dull whichever way you approach it. Just about to get on the channel tunnel...the coach is a little aromatic already.

2:23pm Richard Fenne Well earned coffees at Folkestone services waiting for the Chunnel. All arrived safely with most people riding the full distance. Be interesting to see how many people still feel like riding the distance tomorrow when we tackle +300kms in France. See Richard's picture of Folkestone welcoming C2C riders

11:50am Alex Smith Great atmosphere at the Grand Depart in Greenwich this morning. Wish I was doing it. Hope to get film and pictures up soon. Amusing to see the motorcylist leading out the riders doing his best to choke the peleton with exhaust fumes. Greg Morris took the brunt of the fumes.

8:58am Carl Carrington via Twitter. Best of luck to the all the Cycle2Cannes guys Roll on.... (@carlcarrington)

7:48am Richard Fenne Off to Greenwich with enough kit to start my own branch of Condor Cycles. Cyclists are weather-obsessed so I may as well get it out of the way and tell you that it is fortunately dry but a bit overcast. Stories of snow on the Paris-Nice pro ride, which just precedes us, has put fear into the peloton.

5:20am Ulysse Dormoy via Twitter. Unfortunately not a great nights sleep! Would have liked more! Anyway it is the first day of C2C today! Fingers crossed for good weather! (@dormoyu)

11.23pm Greg Morris on Twitter. Call me a sad bastard but I am actually listening to Kraftwerk's Tour de France Soundtracks as I pack ready to tour France. Quelle fromagé. @ggmoss