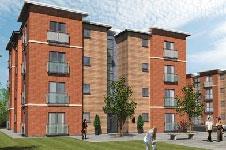 The £130m-turnover developer David McLean has gone into administration after being hit by the residential market downturn.

The company, based on Deeside, Flintshire, has approximately 320 staff. Deloitte has been appointed administrator.

David McLean, which operates throughout the north west, midlands, south wales and south west, is one of the largest casualties of the credit crunch in the industry so far.

The firm had subsidiary operations in housebuilding, development and contracting, all of which have been placed into administration. The firm’s contracting business, David McLean Contractors, is to be closed, although Deloitte is seeking a buyer for the housebuilding division.

Nick Edwards, joint administrator, said: “Whilst the property downturn has impacted the group’s cash flow, the land and property assets are high quality, and combined with the excellent reputation of the group, should make the house building division an attractive prospect for potential purchasers. We are continuing to trade this part of the business whilst we seek a buyer.

“The contracting division has struggled to generate a critical mass of profitable contracts, and regrettably we have had to take the decision to close that part of the business, other than retaining a significantly reduced headcount to work with customers to complete or transfer limited works on outstanding contracts.”

Langtree Group, which has a joint venture with David McLean on the development of Liverpool’s Garden Festival site, said that although progress would inevitably be delayed the project would not be stopped.

John Downes, Langtree managing director, said: “Langtree group is in a very strong financial position with a healthy balance sheet and has the ability to deliver the project on its own, if needed.”